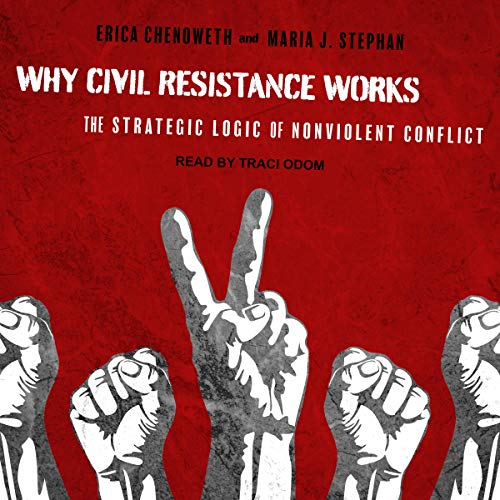 For more than a century, from 1900 to 2006, campaigns of nonviolent resistance were more than twice as effective as their violent counterparts in achieving their stated goals. By attracting impressive support from citizens, whose activism takes the form of protests, boycotts, civil disobedience, and other forms of nonviolent noncooperation, these efforts help separate regimes from their main sources of power and produce remarkable results.

In this book, Erica Chenoweth and Maria J. Stephan detail the factors enabling such campaigns to succeed and, sometimes, causing them to fail. They find that nonviolent resistance presents fewer obstacles to moral and physical involvement and commitment, and that higher levels of participation contribute to enhanced resilience, greater opportunities for tactical innovation and civic disruption, and shifts in loyalty among opponents' erstwhile supporters.

Chenoweth and Stephan conclude that successful nonviolent resistance ushers in more durable and internally peaceful democracies, which are less likely to regress into civil war. Presenting a rich, evidentiary argument, they originally and systematically compare violent and nonviolent outcomes in different historical periods and geographical contexts, debunking the myth that violence is necessary to achieve certain political goals.

What listeners say about Why Civil Resistance Works

Well arranged and well put together study and analysis. Even noting expected biases, I was educated greatly by their thoughtful arrangement and presentation.

Non-violence can make a difference

There is no limit to the atrocities we humans commit against one another for power.