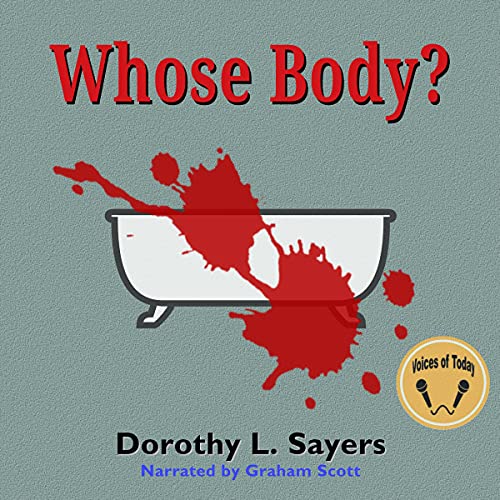 By: Dorothy L. Sayers
Narrated by: Graham Scott
Try for $0.00

Whose Body?
By Dorothy L. Sayers

The great financier, Sir Reuben Levy, disappears from his Park Lane home on a November night, apparently without a stitch of clothing, or even his spectacles.

On the same night in a suburban bathroom in Battersea, an unknown body bearing a superficial resemblance to Sir Reuben is discovered, reclining in the bath tub, unseasonably dressed in nothing but a pair of pince-nez.

Lord Peter Wimsey is asked to look into the case of the Battersea body, and joins forces with his friend Inspector Charles Parker of Scotland Yard, who is charged with investigating the Levy disappearance. But are the two case connected by more than the friendship of the two detectives? Lord Peter gradually uncovers an old resentment, leading to a gruesome crime....

What listeners say about Whose Body?

Casual anti-Semitism, typically endemic in Britain and other countries throughout the 1920s to the late 40s, makes this otherwise delightfully written difficult to read without constant, painful wincing, Could be used as a historical lesson about casual discrimination and how damaging it is to all concerned.