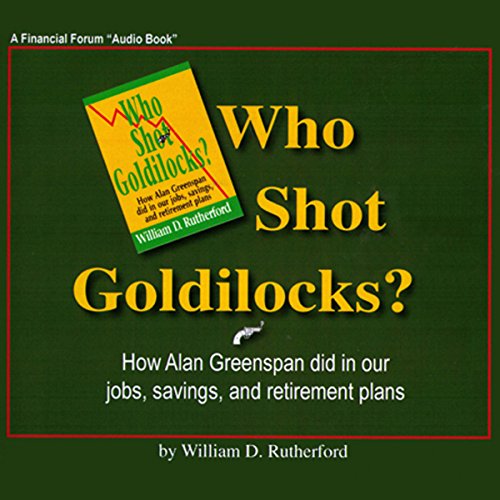 How Alan Greenspan Did In Our Jobs, Savings, and Retirement Plans
By: William D. Rutherford
Narrated by: Bryan Earl
Length: 1 hr and 47 mins
Categories: Nonfiction, Economics
3.5 out of 5 stars 3.5 (12 ratings)

The U.S. economy experienced one of the most productive and prosperous decades in its history in the 1990s. Led by the engines of technological advancement, a post-Cold War surplus of investment capital worldwide, and the growing importance and practice of international trade, the American economy took off on the longest unbroken expansion in its history. Remarkably, this growth was not so feverish as to create inflation, as production efficiency was at an all time high. It was also steady enough to avoid the cool periods many expansions experience. Many economy watchers called it "the Goldilocks Economy", because it was not too hot and not too cool. It was just right, and the country prospered behind it.

Then, very quickly and with little warning, it ground to a devastating halt. Businesses were immobilized by the capital crunch caused by the falling stock market. The fallout was felt nationwide. Millions of hard-working Americans lost their jobs, homes, and savings. Many lost everything.

Across America, people asked the same question: What happened?

In Who Shot Goldilocks?, William D. Rutherford outlines in detail the economic and policy decisions that helped create the greatest generation of wealth in American history - and the incredible actions that ultimately destroyed it. Who Shot Goldilocks? presents a clear-eyed view of the inner workings of the American economy, explains how policy decisions affecting millions are made, and shows how the people responsible for maintaining the course of the economy failed. It is necessary reading for anyone concerned about America's place in the global economy now and in the future.