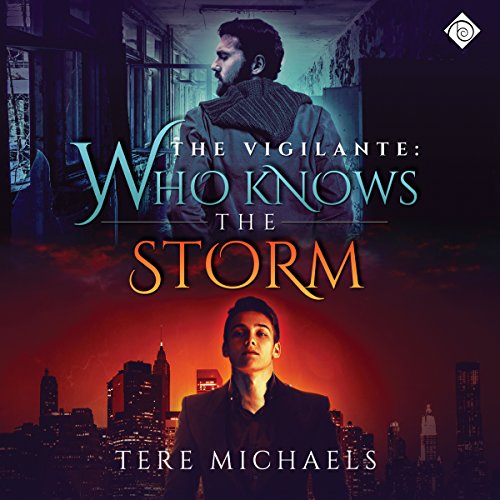 Who Knows the Storm

By: Tere Michaels
Narrated by: Jonathan Young
Try for $0.00

In a dystopian near future, New York City has become the epicenter of decadence - gambling, the flesh trade, a playground for the wealthy. And underneath? Crime, fueled by "Dead Bolt", a destructive designer drug. This New City is where Nox Boyet leads a double life. At night, he is the Vigilante, struggling to keep the streets safe for citizens abandoned by the corrupt government and police. During the day, he works in construction and does his best to raise his adopted teenaged son, Sam.

A mysterious letter addressed to Sam brings Nox in direct contact with "model" Cade Creel, a high-end prostitute working at the Iron Butterfly Casino. Suspicion gives way to an intense attraction as dark figures from Nox's past and the mysterious peddlers of Dead Bolt begin to descend - and put all their lives in danger. When things spin out of control, Cade is the only person Nox can trust to help him save Sam.

What listeners say about Who Knows the Storm

This is a really great start to, I hope, a series. Be forewarned that the ending, while a HEA, doesn't wrap up all issues. I really enjoyed this book overall, although there are some glaring world building holes. In a nutshell, NYC has experienced a catastrophe and becomes this lawless din of sin and crime. The problem is, apparently the rest of the U.S. is intact but turns a blind eye to NY and let's this happen. Maybe this is explained away in future books. But if you can ignore that, the romance and underlying mystery are quite good. This is an enemies to lovers romance between Cade and Nox. Nox is a vigilante trying to fly below the radar for the sake of his son, Sam. Cade is a high priced prostitute who mistakenly falls into a bigger mystery that changes his life and brings Nox into his life. It is very well written and I look forward to the next installment. The narrator does a great job of bringing these characters to life. Worth a credit.

Jonathan Young does a great job

Nox is a vigilante in dystopian New York after a massive flood has left the big Apple in ruins. He has a “son” that he cares about above all else and a desire for justice.Cade is a “model”/rent boy who ends up bringing a letter to Nox’s son, Sam, and getting involved with Sam and Nox in a dangerous game where things aren’t as they seem.The end is sort of a cliff hanger – so be warned – that hopefully leads us to the next book.**It took me forever to get through this book because I love Tere Michaels but I’m just not a big fan of the dystopian future storyline.
So take this review with a grain of salt and here are my impressions:
1) Tere Michaels is a great writer who writes fantastic, gritty, sensual characters with a lot of depth
2) Even her secondary characters are fully developed and engaging
3) The smexy times in this story are hot – another of Michael’s skills
4) This is a little different than the previous books I’ve read by her in that it is more dark and lies more heavily on the non-romance/thriller portion of the story
5) Sometimes the story was twisty, turny and confusing to me, but it leaves a lot of potential for future segments in the series
So – I give this 4 of 5 stars for writing, characterization and creativity but 2.5 of 5 stars for overall romance and lack of good “feels”, averaged to 3.25 stars.
Audio
Jonathan Young is a new narrator for me, but he has won me over! I really, really enjoyed his narration here. He does a sweetly southern accent for Cade and a nice dark growl for Nox. He differentiates nicely the other voices as well and did a truly amazing job with the smexy scenes. Even though the story is still very dark and not exactly my cup of tea, I really enjoyed the passion in the narration and enjoyed listening to the story despite the darkness. This absolutely added to my enjoyment of this story and bumps my rating up to a 4.5 of 5 stars.

EXellent Stroy with a perfec Narrator.

If you could sum up Who Knows the Storm in three words, what would they be?

What does Jonathan Young bring to the story that you wouldn’t experience if you just read the book?

His voice is so pleasant I can hear this story for ever.
I hear it in one day.

It made me feel exited on the action and hot for the very nice sex scene.

Loved this one ,looking forward to the next one.

Who Knows the Storm is a thrilling, edge-of-your-seat ride! I highly recommend it to anyone looking for a strong action/suspense story with some romance. The narration is perfectly done, and the choices of the different voices are great. Jonathan Young's performance really brings the story to life.

A gay vigilante ... about time! This book throws together so many genres I love. It is a dystopian adventure with suspense, mystery and a vigilante main character. The characters are wonderfully written. They have depth, history, and personality. The detailed way the world is developed makes it really come to life. The story itself is immediately engaging. The well-timed reveals of present and past mysteries kept me intrigued through the whole book, not quite knowing what was coming next. The many moving parts in the story make it thoroughly entertaining.

I wouldn't recommend this as a standalone. Some important things are left unanswered, but there is a definite sense of conclusion to this first part of the series. I'm very much looking forward to the next book!

*I received a free copy of this book to read for Inked Rainbow Reads in exchange for an honest review.*

Diary of a Bibliophile Review

I love a good plot. And I love M/M books. But I’ve been in a slump lately because it feels like I’ve been reading the same three plot lines over and over again. I needed something different, and Tere Michaels did it.

Set in a dystopian, near-future New York, WHO KNOWS THE STORM is the story of those trying to make a life for themselves in the city ruins after an epic storm. As someone who has economics and history, I found the story incredibly believable. Most of the population has left. For those who have stayed, mafia and drug dealers now rule. Corruption is wide-spread and deep. Think New Orleans if the world hadn’t flooded money into rebuilding and the looters were put in charge. Think Detroit.

And it is this believably that makes the story feel real. That and the characters. Michaels does a wonderful job with fleshing out her characters into three dimensional people. Nox (the Vigilante) is trying to raise his adopted son, Sam, in this poverty stricken and corrupt world. Worker by day and neighborhood patrol by night. Makes him sound like some sort of super hero, but no, it never comes to that. He has a do-gooder streak in him that is both endearing and stifling for his kid, but really he is just a man who is trying to keep his home safe.

Cade has a position of privilege in the city. As a high-end prostitute at one of the big casinos, he’s a local celebrity. When he agrees to deliver a letter to Sam for one of his clients, he crosses paths with Nox. I’m picky when it comes to characters in the sex industry. I like to read them when the characters are consenting adults in control of their bodies. I don’t like stories where they are forced to be with despicable people or are abused. Even worse, I hate to read about characters who have to sell their bodies because they have no other choice. In Cade’s case, he is there because he wants to be. He is young and gorgeous and, thanks to his job, he’s rich. I’m cool with that.

Nox’s relationship with Cade is not a schmoopy romance, and thank god for that! Their romance is almost as gritty as the story, and it fits beautifully. The sex is hot, but not the main focus of the story. The author doesn’t try to artificially amp up the drama. It all feels natural, a subplot to the dramatic story. Readers of Tere Michael’s other books may be caught a little off guard by how different this book is, but I strongly recommend giving it a try.

I listened to this book in audio, and the narration was perfect. Jonathan Young’s voice gave the story a dark, natural feel. I see he has done several other M/M audio books, and I’d happily listen to him again.