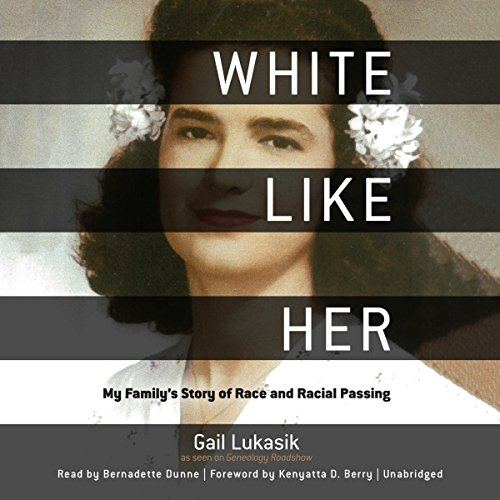 In the historical context of the Jim Crow South, Gail explores her mother's decision to pass, how she hid her secret even from her own husband, and the price she paid for choosing whiteness. Haunted by her mother's fear and shame, Gail embarks on a quest to uncover her mother's racial lineage, tracing her family back to 18th-century colonial Louisiana. In coming to terms with her decision to publicly out her mother, Gail changed how she looks at race and heritage.

With a foreword written by Kenyatta Berry, host of PBS's Genealogy Roadshow, this unique and fascinating story of coming to terms with oneself breaks down barriers. A Washington Post Notable Book of 2017's Most Inspiring Stories.

I hated this book! I would give it a zero if I could. I really wanted to love it. Excellent topic that I normally enjoy but the style of writing and point of view irritated me. The fictional letters that were supposed to be from the points of view is of people that she only knew about from birth records. The comments about how her mother was probably big on manners because she thought it was more white. Has she ever been in contact with Southern Blacks before this discovery? Many Blacks just like anyone else are taught manners in the home. The being insulted that people asked about her ethnic background, how? You’re giving a talk on race! Dah! The not understanding why her Mother’s siblings weren’t told that Shirly was their sister when visiting. Well she was passing for white and they were black children if they told someone, she could have been killed. After all of this research you should have understood this. I was also surprised that there was no connection made between the the mother’s passing and her depression? I’m baffled about the congrats that the writer received for reaching out to her Black family. They are family why would it be something different then reaching out to any family members? The last three chapters were the most interesting. I wanted to stop listening to this so many times. The reader’s tone sounded condescending. Sorry for the rant maybe the issue is too close!

I thought that this had real potential to be captivating. I do find the story interesting, however, there were way too many details in names, dates and people to keep the story straight for the listener. I like the idea of this story, it was just too confusing to keep all the people and relatives straight. After a while, all the people become very difficult to differentiate. I just couldn't listen to any more after the half way point, and I think I would have liked to if it wasn't so tricky to understand.

The most interesting aspect of this story is the secret that her mothers has kept her entire life.

Would you listen to another book narrated by Bernadette Dunne?

Besides being very confusing with her family tree looking back on many generations, it does make you question your own identity.

This book is EXTREMELY INAPPROPRIATE. The author fabricated letters from ancestors and made assumptions about what people that are dead thought and felt when alive. The author defends her RACIST father by saying he was a product of his upbringing, as if that is an excuse and protect the man's image. The author is NOT biracial and attempts to tell the story of a woman who is. As a MULATTO man I have to say I found this book EXTREMELY OFFENSIVE. Never has my blood boiled more in anger than after having read this RACIST book. I strongly believe this book should be pulled from book stores. The author also fabricated that racial categories are used to oppress people of color, she is not a person of color.

A Caucasian womans dillusion of race.

This whole book was annoying to me as a man of color with a very racially diverse family and upbringing. This woman spends the entire book trying to delineate her colored ancestors from the whole of black America. She uses terms like "Mulatto" and "Free persons of color" in an attempt to differentiate and restore the social paradigm of "the lighter the better" which is the bedrock of white supremacy and the pseudo science of eugenics. She constantly refers to the one drop rule that has in the past and still to this day relocates all biracial people to the subordinate designation of "Black". This phenomenon isn't exclusively to her family and doesn't really apply being that most her relatives were half black and weren't the product of some minuscule amount of a racial admixture. Looking at the picture of her mother it eludes me how she could even pass for white. From the photo on this book's cover she appears to me to just be a run of the mill lighter skinned black woman. This book is one woman's attempt to self validate herself being amongst the white majority after discovering the contrary. Too men Caucasians subscribe to the ideology of racial superiority conciously or subconsciously and this book made that very apparent.

Such a relatable story!

This is an amazing story! I loved Gail's drive to go after the truth. I also love how her story led her to her family.

I had high hopes for this book but it wasn’t all that great. It was a bit mundane with too much detail and minutia. I found myself zoning out and not paying attention at these times. I was hoping for more of an interesting story which it was at times but more than not the narrator was droning on about 3rd, 4th great grandfathers etc.

Overblown rhetoric, no important insights revealed or compelling character development.
I learned nothing new about race!

I really liked this book. As a long-time family historian myself, with 1692 witches and murders in my family tree, I could appreciate Gail’s emotional highs and lows when it came to her findings. When climbing a family tree one never knows just what they will find.

I adored this story. I am fascinated, I was enthralled and expectant. Incredibly well-written. I cried and got through this in 2 days. Recommending to everyone!

While I found the reader to be a bit mundane at times, the story itself is filled with so many lessons, history teachings, hope, and great heritage. I’m so glad that I had the chance to listen to this and hear this story. It’s a wonderful standing point for the American culture and make up, and its so prevalent and in the now!

Enjoyable,informative but a little confusing with names and places sometimes. Would recommend if you are into History

this is a fascinating family story. very thought provoking and beautifully read. I highly recommend it