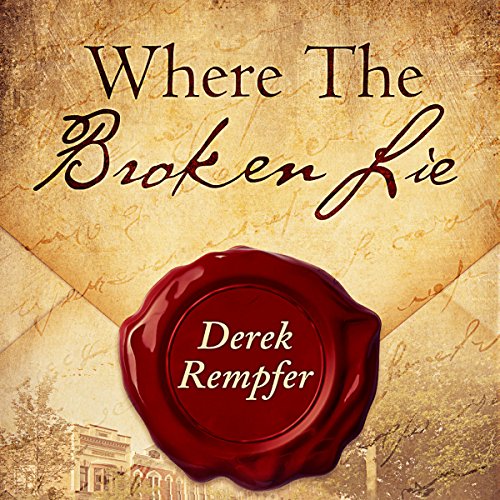 Where the Broken Lie (First Edition)

Where the Broken Lie (First Edition)

When Tucker returns to his hometown of Willow Grove to grieve the death of his infant son, memories of the murder of Katie, his childhood sweetheart, are ignited. In spite of her death being blamed on a disturbed drifter known as Slim Jim, Tucker wonders if the real killer is still out there.

With new clues arriving through anonymous letters left at the graveyard, Tucker is certain that Katie's death is truly unsolved. While coming to terms with the loss of his son, Tucker also seeks truth. But the real killer may be out there, willing to kill again to protect a dark secret.

Where The Broken Lie shines a spotlight on small-town secrets, faith, fear, love, and loss in this enigmatic journey into the scarred hearts left behind.

I liked this book very interesting

i actually this book even though I wanted to stop listening to it. But I wanted to know how Katie and his son had died. It's crazy how his grandfather was the murder and got away with it. Then when his grandson found out he ran away and killed himself??? I'm guessing. Like wow, he took his grandson first love away from him just because he wanted to be a pedophile. And then lied in Tuckers face when he asked will he find her. I had thought maybe she got killed on her way home not when she went looking for Tucker. So sad. I wouldn't forgive him either he knew he was wrong. Well maybe forgive but not forget.

Where the broken lie

The author does a great job of wrapping the story. The added mystery and poetry keeps you listening to the audiobook.. Full of suspense all through the book

The book is very well written and deals with some touching subjects - grief and despair. With that being said, it also has some lovely, inspiring moments that help you through it. Beyond the writing, the narration is superb. William projects the emotions very well, is clear and well-paced. Overall, this is a wonderful book with a great performance to match.

Death from the heart

I can relate to this story having been in his shoes. It takes a long time to get over the loss of a child but to discover what he did about his grandfather was tragic.
I received this free from the narrator for an honest review.

this was a great book, a book that makes you think, not only about the story but about your life. I love books that make me think. it was very insightful and well written.
the narration was fantastic, great narration is important for the enjoyment of a book! it was fantastic all the way around!

I received a free copy of the audio version of this book for review.

After the lost of his stillborn son Tucker returns to his hometown. While working through his grief he begins trying to unravel the disappearance of his childhood friend. It's a decent storyline but is slow moving and I didn't care for the ending.

The narration was good. William Sturdevant is one of the best.

While this is a story that deals with very difficult subject matter, it has such beautiful, inciteful moments that it makes it well worth working through the grief and dispair of Tucker, the main character. The author writes the characters so well that when the narrator lends his voice, giving brilliant vocals traits to each one, you forget that it is someone narrating the story and fall into the story itself. This invites you to really explore the emotions and intricacies of the characters.

I really enjoyed this audiobook

Would you consider the audio edition of Where the Broken Lie (First Edition) to be better than the print version?

My eyes bother me when I read for long periods of time but listening to the audiobook means I can "read" for as long as I wish.

What does William L. Sturdevant bring to the story that you wouldn’t experience if you had only read the book?

William L Sturdevant has many voice characters that kept me involved in the story and it is so much better than simply listening to a story being read to me.

This is a superb story and I would recommend it to others.