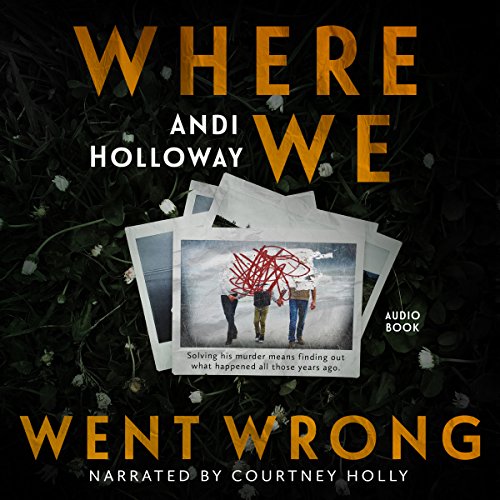 Where We Went Wrong

By: Andi Holloway
Narrated by: Courtney Holly
Try for $0.00

Two families' pasts unravel when the last person to see a missing girl alive is murdered and the victim's crime-writing father becomes the prime suspect.

Second wife Harper Stone's life is nothing like she imagined. A talented writer bound for the kind of greatness she inspires in her husband, Harper exchanges her lifelong dreams of becoming a best-selling author for the ready-made family of her nightmares. With her eight-year-old stepson at the center of a missing person's investigation, Harper struggles to balance the obligations of motherhood with her calling as an author, ultimately sacrificing her success in support of her husband, whose crime-writing career is fueled by their ordeal. It's only when he becomes the prime suspect in his son's murder, years later, that she begins asking the difficult questions about his past, about their marriage, and about the disappearance of the little girl whose remains have never been found.

As Harper looks into the cold case where their problems began, she discovers people aren't who they seem. Not the missing girl's mother. Not Matthew, the last person to see the girl alive. Not her husband, whose obsession with the disappearance has caused an irreparable rift between them. Not even Harper herself, a woman trapped by obligation and circumstance.

In the throes of an investigation based in the past, solving Matthew's murder means getting to the bottom of what happened all those years ago. Two families are destroyed by a single bad decision. The question is which decision, and whose was it?

What listeners say about Where We Went Wrong