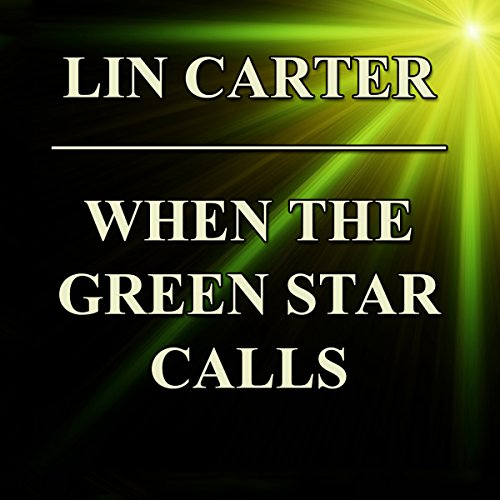 An interplanetary adventure in the grand tradition of Edgar Rice Burroughs.

To him, Earth was a prison of the mind and body. Only on the world of the Green Star would he walk - in the borrowed body of a primitive youth.

What listeners say about When the Green Star Calls

Wildside Press has recently been producing Lin Carter???s books in audio format and, since I read the first of his GREEN STAR series on my Kindle last year, I picked up the second book, When the Green Star Calls, on audio. These novels are short planetary SF adventures similar to the tales of Edgar Rice Burroughs.

In the first volume, Under the Green Star, we met our narrator who has been crippled since childhood. After discovering the ancient Tibetan eckankar, a method of freeing the soul from the body so that it can travel unhindered, he found an exotic planet with a green star, entered the body of one of the planet???s ancient heroes, and fell in love with a princess. While defending her, he died and was abruptly brought back to his dissatisfactory earthly body.Lin Carter When the Green Star Calls audiobook

Some time has passed when we meet him again in When the Green Star Calls. This time when he travels to the green star planet, he enters the dying body of a teenage boy. He hopes to find out if the princess he loves is alive, captured, or dead, but he doubts she???ll be interested in his new youthful self.

I knew what I was in for with When the Green Star Calls ??? a fast pulpy adventure requiring few working synapses, so I read it when I was in the mood for that sort of thing, and it was indeed entertaining. Besides the beautiful scenery, there???s also a decaying city to explore, mutant vegetable vampires, man-eating insects, and mad scientists.

Lin Carter???s narrative is sometimes repetitive, the dialogue is sometimes stilted, and the writing is sometimes overdone to the point of hilarity. For example, a map is a ???cartographic guide??? and a hairless man is not simply ???bald,??? he???s ???devoid of hirsute adornment.??? And then there are comical sentences like this one: ???...he had an indescribable accent I can only describe as the Laonese equivalent of cockney.??? I think these little kinks make the story even more fun ??? it???s just so pulpy.

Wildside Press is new to audiobooks. They???re using Audible???s new do-it-yourself ACX system with narrators I???ve never heard of, so I was concerned about the quality of the production. At least in this case, I needn???t have worried. When the Green Star Calls was narrated by Joel Richards, who isn???t going to be declared my favorite narrator any time soon, but who was quite pleasant to listen to nonetheless. Some of Mr. Richards??? dialogue was stilted, but that could very well have been Lin Carter???s fault. Overall, this was a nice performance and I will definitely be picking up some more of Wildside Press???s offerings at Audible. When the Green Star Calls ended, kind of annoyingly, on a cliffhanger, so I???ve already downloaded the next adventure: By the Light of the Green Star.
Originally posted at Fantasy Literature.