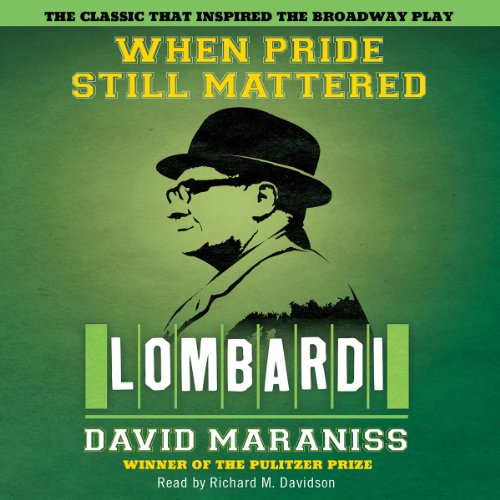 When Pride Still Mattered is the quintessential story of the American family: how Vince Lombardi, the son of an immigrant Italian butcher, rose to the top, and how his character and will to prevail transformed him, his wife, his children, his players, his sport, and ultimately the entire country.

It is also a vibrant football story, abundant with accounts of Lombardi's thrilling life in that world, from his playing days with the Seven Blocks of Granite at Fordham in the 1930s to the glory of coaching the Green Bay Packers in the 1960s. It is also a study of national myths, tracing what Pulitzer Prize-winning biographer David Maraniss calls the fallacy of the innocent past, and an absorbing account of the mythmakers from Grantland Rice to Howard Cosell who shaped Lombardi's image.

By the time he died of cancer in 1970, after one season in Washington during which he transformed the Redskins into winners, Lombardi had become a mythic character who transcended sport, and his legend has only grown in the decades since. In When Pride Still Mattered, Maraniss renders Lombardi as flawed and driven yet ultimately misunderstood, a heroic figure who was more complex and authentic than the stereotypical images of him propounded by admirers and critics.

Using the same meticulous reporting and sweeping narrative style that he employed in First in His Class, his classic biography of Bill Clinton, Maraniss separates myth from reality and wondrously recaptures Vince Lombardi's life and times.

What listeners say about When Pride Still Mattered

thought it was pretty good, interesting guy. Was hoping it would dig a little more into his mindset

sound quality 2 is not so good

The biography is well written and the narrator does a nice job, but listening to sound quality level 2 is rather trying to the ears after a while. I probably won't buy any more audio books compressed to sound quality 2.

For all Vince Lombardi fans

Loved this program. What an insight into the man. The author's revealing stories don't make Coach Lombardi seem less of a man, in fact learning about his humanness makes me respect him even more. Thank you David Maraniss

I feel like this might be abridged. I am not positive but it felt rushed and short. If you watch the Vince Lombardi "A Football Life" you will get most of the information contained in this book.

Growing up with the Packers and living in the shadow of Lambeau Field made this a must read. The story filled in many of the holes in my understanding of the Lombardi years. I had to work to accept the dry reading of the text. Worth every penny.

He should have found someone else to read

This is not written like a sport's writer; very dry.

Saying all that - lots of insight into Lombardi the man versus Coach. If that is what you want book will be worth more Stars.

Would you consider the audio edition of When Pride Still Mattered to be better than the print version?

I haven't read the print version but I prefer the audio.

Have you listened to any of David Maraniss’s other performances before? How does this one compare?

I am a first time listener.

Soft story about a tough man

I enjoyed hearing about the details of his personal life.

What does David Maraniss bring to the story that you wouldn’t experience if you just read the book?

Maraniss did a good job of interjecting emotions.

Could you see When Pride Still Mattered being made into a movie or a TV series? Who should the stars be?

a must for any Packer fan, but worth listening to for all. a story of succeeding and selfless determination to be the best for the team, not the individual

Wanted insights on leadership and a critique of his character, instead I got chronological overview of Lombardis career.

Narrator with a voice for insomnia!

As above. Hard to enjoy when the narrator was so monotone, I could only listen when out walking else I'd fall asleep.

The King of Titletown

This is a very intersting biography of the man who lead the Green Bay Packers to the first two Super Bowl titles. The trophy now bears his name. But where did the legend begin?

This biography follows Lombardi from high school coach to Army coach and as an assistant on the coaching staff of the New York Giants and then onto Green Bay before his final year as head coach of the Washington Redskins.

On the New York Giants staff was Tom Landry who, as coach of the Dallas Cowboys, faced Lombardi and the Packers in the infamous 'Ice-Bowl' (1967 NFL Championship Game). Maraniss sets the scene so well that you can almost feel your fingertips start to freeze. It was a game that some thought would not go ahead because of the cold but the game became legendary in the history of the NFL.

Maraniss also sets the record straight concerning some of Coach Lombardi's famous quotations ~ and how that they have been taken out of context and even contradict his strong family ideals.

A great audiobook and a must for NFL fans who want to learn more about this great coach.

The story behind the trophy

I have long been interested in the story behind the man for whom the Super Bowl trophy is named. David Maraniss’ book gives a short(ish) but deep insight into the man behind the Green Bay Packers success in the 1960s.

Like all ‘heroes’ Maraniss’ Lombardi is a flawed perfectionist. He captures the heart of the man and the influences that helped define is coaching and life mantra.

While the performance is variable the story is compelling.