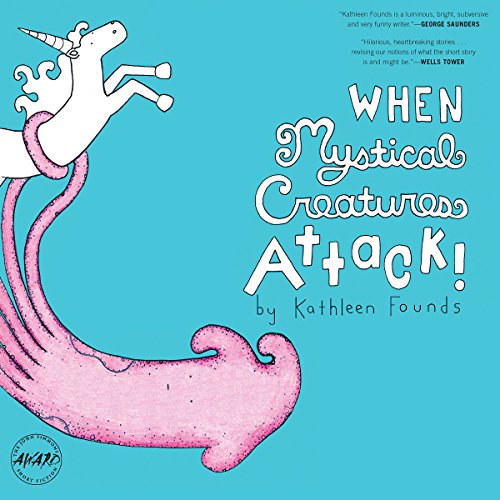 By: Kathleen Founds
Narrated by: Renata Friedman
Free with a 30-day trial

In When Mystical Creatures Attack!, Ms. Freedman's high school English class writes essays in which mystical creatures resolve the greatest sociopolitical problems of our time. Students include Janice Gibbs, "a feral child with excessive eyeliner and an anti-authoritarian complex that would be interesting were it not so ill-informed", and Cody Splunk, an aspiring writer working on a time machine. Following a nervous breakdown, Ms. Freedman corresponds with Janice and Cody from an insane asylum run on the capitalist model of cognitive-behavioral therapy, where inmates practice water aerobics to rebuild their Psychiatric Credit Scores.

The lives of Janice, Cody, and Ms. Freedman are revealed through in-class essays, letters, therapeutic journal exercises, an advice column, a reality show television transcript, a diary, and a Methodist women's fundraising cookbook. (Recipes include "Dark Night of the Soul Food", "Render Unto Caesar Salad", and "Valley of the Shadow of Death by Chocolate Cake".)

In "Virtue of the Month", the ghost of Ms. Freedman's mother argues that suicide is not a choice. In "The Un-Game", Janice's chain-smoking nursing home charge composes a dirty limerick. In "The Hall of Old-Testament Miracles", wax figures of Bible characters come to life, hungry for Cody's flesh.

Set against a South Texas landscape where cicadas hum and the air smells of taco stands and jasmine flowers, these stories range from laugh-out-loud funny to achingly poignant. This surreal, exuberant collection mines the dark recesses of the soul while illuminating the human heart.

What listeners say about When Mystical Creatures Attack!