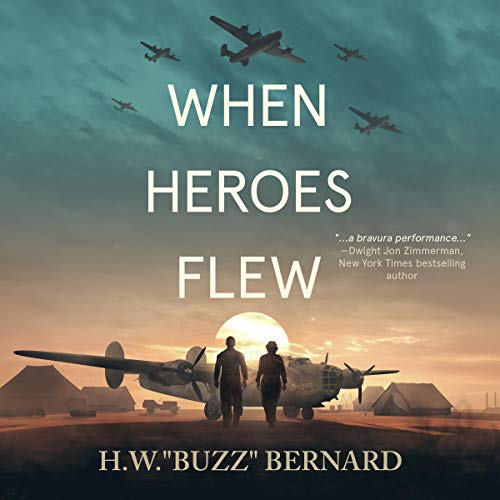 An award-winning novel of extraordinary bravery, inspired by the true story of one of the most harrowing air raids ever flown. Fans of Beneath A Scarlet Sky, The Nightingale, and Unbroken will enjoy this unforgettable tale of duty, honor, and compassion.

For B-24 bomber pilot Al Lycoming, the mission was history in the making. For Women’s Airforce Service Pilot Vivian Wright, it was a chance to put her skills to the ultimate test...and share in the burden of combat.

Dispatched to Benghazi on mysterious orders, Al Lycoming finds nearly 200 other B-24 bombers being assembled...and a top secret assignment that will catapult them all into seemingly impenetrable Nazi defenses.

But when his co-pilot falls ill at the last moment, Al secretly finds help from an unlikely source — Vivian.

Together, the two fly towards dark skies filled with enemy flak and fighters...and into the pages of history.

With perspectives from American and German pilots alike, When Heroes Flew masterfully weaves together one of the most dangerous and incredible aerial operations of World War Two with a riveting tale of bravery, suspense, and self-sacrifice.

“This book gripped me from the very first page...In real life, this WW2 mission resulted in the award of Five Medals of Honor. In my view, they all deserved one. Highly recommended.” (Rachel Wesson, author of The Orphan Train series)

"...chuckle and weep in tandem while forgetting everything around you but the story itself." (Kathleen M. Rodgers, author of The Flying Cutterbucks)

"[The pilot's]...amazing courage, and that of the entire group, is subtly drawn." (John J. Gobbell, author of the Todd Ingram series)

“Strap in! It’s one hell of a ride!” (Don Keith, author of Final Bearing)

What listeners say about When Heroes Flew

Parts were great and parts were kinda stupid

OK, I know a lot of effort went into this book and the author details his sources at the end but I was really torn by this one. Parts of it are really compelling and I couldn't stop listening. Other parts, frankly, were so far fetched as to be historically inaccurate and distracting to anyone with some grasp of the history. Because of this, I really disliked the parts of the book leading up to the Ploesti raid. Then, suddenly, it became really interesting.


Things to like...
1) The book actually provides a pretty understandable description of the first Ploesti raid from which it's easy to see how things got so screwed up. I think the Ploesti part (the core) of this book would provide a great introduction to people who are interested in the raid but know nothing about it.

2) The 'relationship' between opposing pilots was actually pretty touching. I have to admit that I teared up a few times near the end.


Things to, perhaps, not like...
1) The narrator was good but his vocal range wasn't up to covering the range of characters with which he was tasked. In hindsight, he would have been better off reading the female characters with his normal voice. His attempt to sound female felt almost like caricature.

2) Elements of the plot were, frankly, ludicrous. I can't go into them without giving away the story but, you should be able to get it when you listen to it.

3) The author was quite heavy handed in providing historical context by putting words into characters' mouths. For example, when German fighter pilots describe how they feel about the Nazi regime. Sometimes ideas like this are better just described or inferred over the arc of the story, rather than being put into the mouths of characters.


While I love reading aviation history nonfiction, historical fiction, with its ability to describe emotions and feelings can fill a role that nonfiction sometimes can't. For example, a piece of excellent historical fiction about a WW2 bomber mission is BOMBER by Len Deighton. Part of what it does well is get more technical about the aircraft involved and this gives it a higher level of realism.


For what it's worth, I couldn't help but feel that WHEN HEROES FLEW has the bones of a a classic. I know that it's a rewrite of an earlier short story but, if the author were interested, I'd recommend that he read BOMBER, and a few similar books, and then give this one a third shot, removing some of the more outlandish plot points.

This is a well written novel filled with history and military honor. Even though it is a work of fiction, the feel of truth resonates within its historical foundation. The narrator did a fabulous job drawing out the characters.

I loved this book, a wonderful story of the hardship during this time, for both sides.