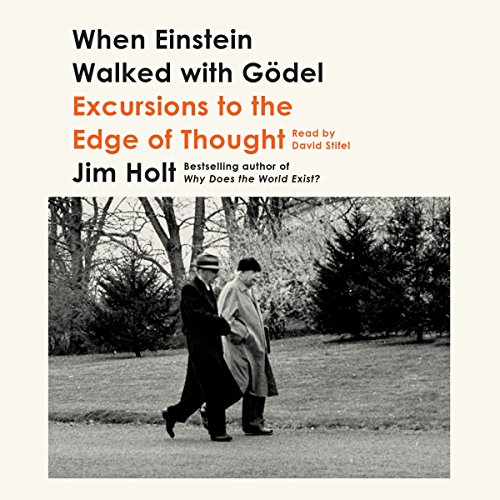 When Einstein Walked with Gödel

Excursions to the Edge of Thought
By: Jim Holt
Narrated by: David Stifel
Length: 15 hrs and 19 mins
Categories: Literature & Fiction, Essays
4.4 out of 5 stars 4.4 (368 ratings)

When Einstein Walked with Gödel

By: Jim Holt
Narrated by: David Stifel
Free with a 30-day trial

From Jim Holt, New York Times best-selling author of Why Does the World Exist?, comes When Einstein Walked with Gödel: Excursions to the Edge of Thought, an entertaining and accessible audiobook guide to the most profound scientific and mathematical ideas of recent centuries

Does time exist? What is infinity? Why do mirrors reverse left and right but not up and down? In this scintillating collection, Holt explores the human mind, the cosmos, and the thinkers who’ve tried to encompass the latter with the former. With his trademark clarity and humor, Holt probes the mysteries of quantum mechanics, the quest for the foundations of mathematics, and the nature of logic and truth. Along the way, he offers intimate biographical sketches of celebrated and neglected thinkers, from the physicist Emmy Noether to the computing pioneer Alan Turing and the discoverer of fractals, Benoit Mandelbrot. In this audiobook, Holt offers a painless and playful introduction to many of our most beautiful but least understood ideas, from Einsteinian relativity to string theory, and also invites listeners to consider why the greatest logician of the 20th century believed the US Constitution contained a terrible contradiction - and whether the universe truly has a future.

What listeners say about When Einstein Walked with Gödel

A good overview of scientific theory

I read a lot of audiobooks about science. I don't always understand everything I hear, but the format does make that easier for me. Holt's collection of essays on science and (to a lesser degree) philosophy range from the easily comprehensible to the sort of things that would make my eyes glaze over if I was reading hard copy, but for the most part he does a great job of making a lot of complex scientific ideas much clearer and more accessible. His discussions of physics and mathematics, which make up the bulk of the book, made a good deal of sense to me as I listened. Not that I could reproduce the formulae or equations involved. But Holt manages to give a layperson the ability to grasp some difficult concepts with the clarity of his prose. And then there's the philosophy part which sometimes utterly eludes me because so much of it is counter-intuitive.  Still, it's almost as interesting to hear about the battles over who took credit for what, even if I don't begin to understand the What part, as it is to get the lowdown on Einstein's problems with "spooky action at a distance" which name could have been applied to gravity before science became aware of how forces work, or Gödel's paranoia that people were trying to poison him, leading him to effectively starve himself to death. Certainly some of the most interesting parts were Holt's discussion of the life and work of Alan Turing, who these days seems to be more famous as a gay martyr than as a brilliant mathematician who, in breaking the Enigma code, helped win WWII. It's one of those books that veers from the chatty and informative to the murkily complex. Some of it is a joy to read, some went the proverbial route of in one ear and out the other. Still, I feel as if I got a great deal of both pleasure and information out of it, and I think that's all I can reasonably expect.

Facinating Stroies in Science and Philosophy

This is a great book about all the interesting stuff in the philosophy of science. It is where science takes a leap of faith and philosophy becomes relevant that things become really fascinating. What we don't know or know very little about, what is counterintuitive, and the brilliant minds that laboured to reveal their secrets. Some people think all science uses the same methodology and disagreements are in the details. This book shows opposing thought on science, epistemology, and belief. Whether its about time, relativity, quantum physics, or just the way we think, this book shines a light on some of the most intriguing aspects of modern knowledge and the quirky people behind them. Questions, especially the unanswered ones, are the interesting ones, and this book does not disappoint. highly recommended to philosophy and philosophy of science fans, as well as anyone who likes the mysteries of reality if one does exist.

This book covers a huge spectrum of topics and while they are almost all fascinating, each chapter could be its own book. I applaud the author for undertaking such a heavy task. I recommend this book.

one play through was not enough for me. this book covers a lot of ground and over a long period of time. anyone who has interested in math and science will enjoy this book. it's not as dry as some science history retelling and also goes into detail of the personality's of some of the greatest minds in making the world what it is today.

Very hard to put down

The title is a bit misleading, but Jim Holt runs through so many of the great philisophical questions that science has pondered for years. short chapters get to the point and offered references to thinkers and scientists I had not heard of (and I like to think I read a lot of science and philsophy books!). Essays on creativity, the possible demise of the universe, gravity theories, mathematical conundrums and the mis-naming of phenomenon are all just fascinating. I found it hard to put down and wanted to tell friends about it. The narrator is great too - has a good way with jokes to lighten some of the heavy going.

Totally reasonable explanation of highly complicated topics with a highly impartial representation of the relevant views on a matter.

I am glad I found Jim Holt. He takes on some of the most interesting mathematical concepts in the world today, and weaves intriguing stories around them. He covers the bios of the discovers from new angles, and explains the concepts so well, that the common person with perhaps some college level math can easily understand and appreciate his perspectives. This book is actually a compendium of a series of essays he has written over the years. But there is vary little overlap. If you have always been fascinated by numbers, and mathematical concepts, this is a book for you.

I found this by accident while looking for GEB (which is not on audible), but after reading this I feel fortunate that I didn’t waste my time reading anything that wasn’t this. It’s filled with thoughtful and elucidating essays that combine to form a pretty comprehensive overview of the questions pondered by mathematicians, cosmologists, logicians, and the like. Also offers many intriguing topics for further reading. Well worth the purchase

If you're looking for great stories to share around the campfire while singing Kumbaya, this book might be just right for you! It's a collection of entertaining essays (with quite a bit of overlap between them) from a pretty good writer who doesn't actually ever demonstrate much depth of knowledge; but plenty of breadth. After comparing the title of the book with its contents, you might think the author is unintentionally demonstrating the Dunning-Kruger Effect; at least, that's my take-away after listening to this entire Audible. Maybe the book's title was just a bad choice, so I was expecting too much. The essays do contain a lot of details, just not the necessary depth to give those details meaning. If you're looking for something with more depth in the physics arena specifically, but a lot less breadth, try "What Is Real?: The Unfinished Quest for the Meaning of Quantum Physics" by Adam Becker. It's still not deep enough for my taste, but it's a better choice than Jim Holt's book here.

Great book lots of different stories about a lot of different bright minds. Really enjoyed I would advise not listening if your distracted because you will miss a lot. Very simulating.