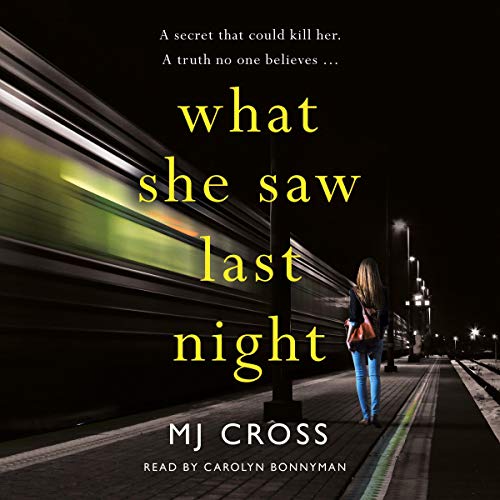 What She Saw Last Night

By: Mason Cross
Narrated by: Carolyn Bonnyman
Try for $0.00

Jenny Bowen is going home. Following an acrimonious split from her husband, she is quitting her job and moving back from London to the small town in the Scottish Highlands where she grew up. After tying up some last-minute loose ends, she rushes to Euston and boards the Caledonian Sleeper, headed north on a 500 mile, 10-hour journey through the night.

As Jenny is getting settled in her cabin, she hears a commotion outside in the corridor. She sees a pale little girl of about eight years old being bundled into a cabin down the carriage, with a stressed-looking woman whom Jenny assumes to be her mother. A tall man glances at the pair as he passes them. Jenny thinks it's strange that he has no luggage. He gives her a look that makes her uneasy before opening the door of the cabin next to her.

When they reach their destination in the morning, Jenny discovers the woman dead in her cabin...but there's no sign of the little girl. The train company have no record of a child of that age being booked on the train, and CCTV shows the dead woman boarding alone.

Jenny starts to get settled in her new home. She tries to put the incident out of her head and tells herself that everyone else is right: she must have imagined the little girl, or it was a misunderstanding. But deep down, she knows that isn't the truth.

What listeners say about What She Saw Last Night

Narrator great; the story? not so much

I find the chase sequence in the house with descriptions of hallways, locked doors, and rooms so stultifying. One thing that I did appreciate, though, was that the lead-up to a possible romantic connection -- also a dreary contrivance -- was dispatched with gruesome bluntness. Though I admit to being drawn in, I agree with another reviewer who found the ending preposterous.

One of my new favorite authors!

After binging on Mason Cross’s Blake books, I enjoyed this departure equally! I think he’s an up and coming writer who builds characters that inspire the reader to be fully in their corners.

The story is a slow build, becomes “suspenseful” finally with about 2 hrs left, with an extremely far fetched ending. The narration was good, but definitely needed to listen to this one sped up. Not bad if you’re looking for a mystery to kill some time with.

So far this is my favorite audio by this author. What a great plot, good characters, it is laid out well and very thought out, with lots of twists and turns. It took me a little while to get into it but once I did I couldn't put it down. So much mystery, sorrow and death. Some characters I really liked past and it broken my heart but the author did a wonderful job filling the store with excitement that kept my heart pounding and me guessing. It has some thrills a few chills and a lot of excitement. It was a very good listen that I totally enjoyed. I even bought a few other of this authors audios. It kept me on the edge of my seat waiting to jump in the book to help out the victims.

I thought the narrator did a good job, there was one time where he repeated one word and I really wasn't sure if that was a repeat or not. He has a pleasant voice, easy to listen to and his character voices were very nice. I almost always knew who was talking and what they were feeling. There is no volume change, no background noise really is a very clean audio. I totally enjoyed this and look forward to listening to more of his work.

This was a wonderful story that I didn't want to end. It was totally thrilling and kept me on the edge.

This is one of the slowest most pointless books I have listened to. I kept waiting for a twist that didn’t come. Narrator good but don’t waste your time unless you are trying to fall asleep.

Dragged a little at the introduction. It's worth getting through that part to an unpredictable story. I will have to look for more story from this author.

Loved this book. It was good to the end. I would recommend it to all.

I enjoyed this escapist story, which is well read by Carolyn Bonnyman but really implausible! But a good level of suspense and plenty of villains makes for an entertaining cat and mouse scenario.

It’s a bit like the Lady Vanishes to start with, as nobody believes the main character actually saw a child in the sleeping compartment of an overnight train to Scotland when the young woman with her is found dead of an apparent drug overdose the next morning.The hunt is then on to find out who she was and where she’s been taken. Difficult when nobody believes she existed in the first place....

Definitely worth a credit but don’t do what I did, which was to listen at bedtime and find myself still intrigued at 2am.

Took a chance on this book as I had never read any by this author. But it kept me gripped, good story, very enjoyable.

Characters so believable you feel you know them so well set within a plot with constant twists and turns that kept you on the edge of your seat until the very last, quite marvellous.

From the start I was hooked, loved the story, characters and the narrator were fantastic. Glad I took the gamble as this book was newly released without any reviews when I bought it. A must listen

Too grisly for me !

A bit too grisly for me and not very believable. Difficult to say why without ‘spoilers’. The narrator however is excellent

Narrator puts me to sleep

Possibly a gd book. But since it made me sleepy most times, it’s hard to tell.