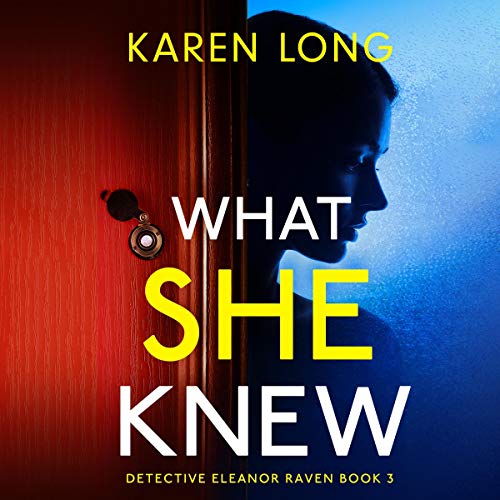 By: Karen Long
Narrated by: Lauryn Allman
Try for $0.00

With the sound of the doorbell, the past she ran from catches up with her.

Baby on hip, Angela Myles hums as she lays out breakfast before the school run when an unexpected knock on the door stops her in her tracks. But when she sees the familiar face through the peephole, she immediately tries to run with her kids out the back door. Because Angela knows her visitor; she knows why they’re here; and she’ll never give up her children.

Hours later, as the police talk softly to Angela’s terrified children, trying to unpick her last moments, they wonder what other secrets she was hiding from those around her. And then another woman goes missing. How many more will pay the price for Angela’s silence?

What She Knew was previously published as The Cold Room.

What listeners say about What She Knew

DI Eleanor Raven is back!

The third-person perspectives of the main protagonists alongside the troubled antagonists made for an interesting read: diving into the characters’ psyches brings an added layer to Long’s writing. While I enjoyed reading “What She Knew,” along with revisiting Long’s cast of detectives, I found that I didn't like this installment as much as I did the first two in the series. As a whole, the storyline didn't sit right with me. I am, however, looking forward to a hopeful fourth book! DI Eleanor Raven is a memorable and exciting character that I'm not ready to let go of just yet!

I'd recommend this book to psychological thriller fans who don't mind gruesome content; a few TW with this one, including animal cruelty and cannibalism. This is book three, and while it can be read as a standalone, I'd recommend reading books one and two first for added supportive background info on the main characters. Many thanks to the author, publisher, and NetGalley for my ebook copy. I have honestly and voluntarily reviewed this title.