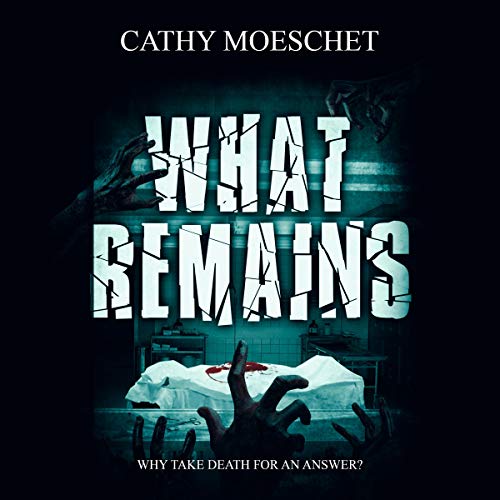 By: Cathy Moeschet
Narrated by: Doug Shapiro
Try for $0.00

Why take death for an answer?

It’s a question that haunts Anthony Rossi. Each day, he works removing organs and tissues from the newly dead for transplantation.

The problem? Almost nothing he does in his job is medically advisable or strictly legal, which is fine with his money-grubbing boss, who doesn’t care if he’s harming others by robbing the bodies of non-donors or passing on unusable tissue. Anthony’s fed up, and dreams of a way out and a new life with the girl of his dreams.

When a co-worker suggests that transplanted body parts may have cell memory - the ability to convey memories and personality traits of the deceased donor to the living recipient - Anthony is skeptical, even after seeing signs of it in others for himself. That is, until his fiancée, who is suddenly killed in a freak hit and run, ends up on an autopsy table at his job. Anthony sets out to find a woman who receives organs from her, desperately hoping that he hasn’t lost the love of his life forever.

But when things go horribly wrong one night, Anthony goes on the run. Along the way, he discovers that not only do human cells possess a power of communication that is stronger and darker than he ever imagined, but they’re holding one hell of a grudge....

What listeners say about What Remains

I have to say I was expecting more of paranormal and medical mystery with organ transplant but it is a crazy creepy story on underground organ market and murders. There are many twists and turns when Anthony Rossi (want to be surgeon) goes on his own against his boss to make money with the help of Dante but gets caught and goes on the run. Rossi also had problems with his love interests. Just think the organs may not be compatible. The ending does have a surprise I was not expecting. I was given this free review copy audiobook at my request and have voluntarily left this review. Thank you

I was hooked from the beginning! Awesome read great performance and story telling! I would definitely recommend this book!

This was a creepy mind trip of a book, in the same vein (pun intended) as Body Parts from the early 90s. Worth a listen!
And it's about damn time the smooth sexy tones of Doug Shapiro narrated something on Audible!

What happens when illegally harvested organs start remembering their past lives? Lets hope we never find out. But in following this story we have a pretty interesting perspective and it's pretty darn creepy. Definitely an entertaining supernatural thriller and the narrator does a great job of ratcheting up the tension.

Captivated by the voice and story

Besides it being a fascinating story that was enthralling, I was captivated by Doug Shapiro, the actor who did the voiceover for the book. He brought this great story to life! Well done all-around!

interesting premise for a story,makes you wonder..

3.5* for the story - I loved the idea behind this story, that transplanted organs retain cellular memories of the donor. It's a great theme for a supernatural thriller. There were only a few reasons why I gave this story less than 5 stars. The main reason is that I couldn't *quite* make sense of the logistics regarding the transplant recipients, and how those recipients (and Dante) were able to find and follow the trail to the main characters. I realize we have to engage in some suspension of disbelief here, but perhaps some more interaction and dialogue with the donor recipients would help strengthen my understanding of how we got from Point A to Point B to Point C, and why the donor recipients seemed to completely have lost their free will even though each person received only one or two organs from a transplant procedure. I also wondered about cell memory transfer of other unaware donors, since our main characters had been engaging in this behaviour for years and years. Finally, I thought that some of the coincidences were stretching it just a wee bit (e.g., the connections between characters in Detroit and New York). It was an interesting story, though, and I don't regret listening to it. Also, the narration was very good for this audiobook. Doug Shapiro's voice complemented the tone of the story well.

The recent, and not so recently, dead are being stolen for their body parts. What happens when all these body parts start remembering there lives before they died. That's where things get hairy!

I enjoyed listening to the narrator, he did a wonderful job with the voices and his narration.

I received a copy of this audible free at my request. All comments in my review are strictly mine..

What Remains is full of suspense, drama, heartbreak, medical debauchery and revenge. I highly recommend this book to anyone who loves suspense mixed with horror.
I received this audiobook review copy and I am voluntarily leaving my honest review.

I love a good thriller and this one was good! The writer has a good imagination and the writing is great. Thought the narrator did a really good job! Would definately recommend!

The first half of this book is rather ponderous, it does however, give us good charaterisations of all the main characters, none of whom are particularly nice people but that just makes the book all the more interesting. The second half is a demented road trip filled with strangers all looking to 'talk' to Anthony, but they turn from wanting to 'talk' to him, to a violent, mindless mob towards the end of the book, this I found a little confusing but it was more what I'd been expecting. The narration iteself is fine.

I received a free copy of this title, at my own request, and voluntarily leave this review.