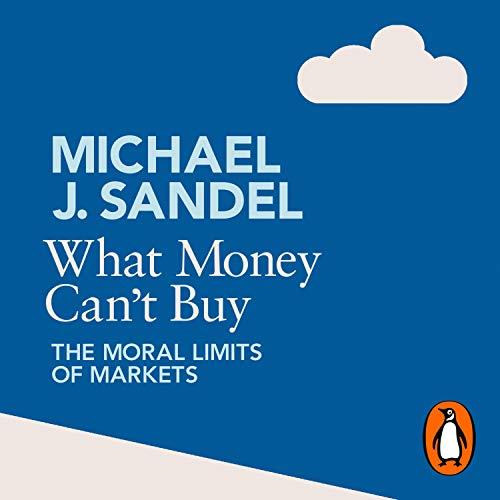 The unabridged, downloadable audiobook edition of Michael J. Sandel's What Money Can't Buy: The Moral Limits of Markets, read by the author himself. Should we pay children to read books or to get good grades? Is it ethical to pay people to test risky new drugs or to donate their organs? What about hiring mercenaries to fight our wars, outsourcing inmates to for-profit prisons, auctioning admission to elite universities, or selling citizenship to immigrants willing to pay? Isn't there something wrong with a world in which everything is for sale? In recent decades, market values have crowded out nonmarket norms in almost every aspect of life - medicine, education, government, law, art, sports, even family life and personal relations.

Without quite realizing it, Sandel argues, we have drifted from having a market economy to being a market society. In What Money Can't Buy, Sandel examines one of the biggest ethical questions of our time and provokes a debate that's been missing in our market-driven age: What is the proper role of markets in a democratic society, and how can we protect the moral and civic goods that markets do not honour and money cannot buy?

"One of the most popular teachers in the world." ( Observer)
"Sandel is touching something deep in both Boston and Beijing." (Thomas Friedman, New York Times)
"One of the world's most interesting political philosophers." ( Guardian)

What listeners say about What Money Can't Buy

A fascinating critique of 'market thriumphalism'

Terrific book, only downsides: slight repetition, some points could have been made with less examples.

What did you like most about What Money Can't Buy?

Sandel is an antidote to the often dubious and heartless reasoning of mainstream economics. He uses clear language and examples from popular culture to illustrate his points.

Have you listened to any of Michael J Sandel’s other performances? How does this one compare?

Before buying this book, I had listened to Sandel's series on BBC Radio 4, 'The Public Philosopher', and his Reith Lectures. This book is in much the same vein; if you liked the Radio 4 lectures, I'd recommend this book, and vice versa.

Although this book discusses developments in our society that are quite depressing, I found it quite uplifting. It is a relief to hear someone who places compassion at the centre of his economic philosophy. Sandel always reminds me that among all the mercenaries of the world, there are a lot of genuinely decent human beings. We're not completely doomed.

One small thing: At about 3hrs 50mins, Sandel refers to a speech by 'Robertson', as if he has already discussed it. I thought I had missed something, but after checking back couldn't find any mention of it. Later in the book, Sandel does indeed discuss Dennis Robertson's speech. I think that sections of the book were moved around at the editing stage, and this non-sequitur was overlooked. If you have bought this book and have noticed this, I found this summary of the speech online:

Robertson (1954) claimed that by promoting policies that rely, whenever possible, on self-interest rather than altruism or moral considerations, the economist saves society from squandering its scarce supply of virtue. “If we economists do [our] business well,” Robertson (p. 154) concluded, “we can, I believe, contribute mightily to the economizing . . . of that scarce resource Love,” the “most precious thing in the world."

Would you listen to What Money Can't Buy again? Why?

I've listened to this audio book a couple of times because there are so many ideas contained within it that one listen doesn't do it justice. It was good to listen and read the book at the same time. It's a real consciousness raiser.

A little slow, especially if you’re already in agreement

If you’re quite left wing, and already recognise a lot of criticisms of capitalism and neoliberalism, this book will seem quite slow. It is comprehensive and engaging if not though

Too many extreme examples

Although I understand and agree with Sandel’s point of view about the moral limits of market economy, Sandel uses too many repetitive examples, sometimes too extreme, to prove his point. This made the book hard to focus for me.

Interesting book will give you new perspective to the economy driven society. The down side of the book it gives too much examples of the same idea and one can get bored. Overall, it is good book and I enjoyed it.

I'd love to know what happens next!

Truly fascinating read. Thank you. This book might make you laugh, or despair, or perhaps like me it'll be both! Sandel is an incredible educator and philosopher. I love how impartially he presents material and provides you with all the arguments and objections on both sides so you can make your own mind up. I've listened to his Harvard Lectures on justice and political philosophy, as well as his BBC series "the Public Philosopher" and the "Global Philosopher" and would highly recommend those too for anyone who enjoys this book and wants more. I know it's not the central theme of the book but it would have been even better if Sandel would have also given all the outcomes for the legal cases he cited, afterall, the legal system is also supposed to reflect what society stands for so it would have been very interesting to know.

From the myriad of examples Sandel gives, the principles of free market economics and the delusion of the self-correcting "wisdom of the market" really has taken over what's driving our societies, almost completely overpowering social norms, human dignity and our sense of humanity. It's a real shame that what's so eloquently described and discussed in this book is certainly not the end of what we and Governments will permit to be bought and sold in future - all in the name of infinite growth, money, money and more money! Is this really who we want to be? If economists are right that humans are such rational actors, then I suppose it is... They're totally wrong though of course, ask any behavioural scientist or psychologist! All the advertising everywhere which he describes reminds me of scenes from numerous dystopian sci-fis.

I'd love to know what happens next but hopefully I'll be gone before people are literally selling their own grandmothers. Perhaps someone already took out a life insurance policy on me without my knowledge or consent, so at least my final act and legacy might be contributing to the magical economy and lining the pockets of some greed, corrupt individual or corporation. What a charming world and value system we cultivate and brainwash future generations to enjoy.

Really, really interesting, and excellently narrated by the author. Poses questions that make you consider the ethical values of commercialism: just because you can (afford to), should you?

FIRST CLASS IN ALL RESPECTS!

This should be a 'must read' for everyone who is concerned for ethics in a world that are children are going to inherit.

For the first time someone has been able to crystallise and explain the misgivings I have felt about the commodification of everything that has occurred since the 1980s.

Michael Sandel sets out all the objections to 'market worship' in terms of the unfairness and corruption inherent in the economic view of every area of life, using a range of easy to understand examples from selling blood to viatical insurance.

I would recommend this book to everyone who feels uneasy at the idea of people having advertising slogans tattooed on their bodies, or who feel horrified at the idea of bidding to adopt a baby.

Most of all I would recommend it to anyone who really wants to understand the real meaning of "the price of everything and the value of nothing".

In one word that explains how you feel after listening to this book. Clear and articulate with a flow that is almost fiction-like ... This book has both haunted and delighted me for months ... I don't honestly know where to turn but if the trends beautifully explained in this book continue unabated and unchanged then the future ahead will be a dystopian nightmare from which there is no escape!!

Very well written and supported, and on a topic that touches all of our lives. An inspired read.

Sandel is an amazing communicator!

No matter which book or article I read from Michael Sandel, he always keeps me captivated and makes learning about complex topics really simple. His ability to mould together politics, economics and ethics is beautiful. Do yourself a favour and listen to this audiobook, it will stimulate thought and discussion with your friends and family and make you really question the role money has in our society. When we should be attaching a monetary value, and when attaching a price to something may in fact be the wrong thing to do.

This was a fantastic book, very thought provoking, and the narrator (the author himself) delivered the material in a natural manner that was easy to listen to, and indeed enjoy. The connection between the narrator and his material is obvious and enriches the recitation.

In terms of the content, I am in broad agreement with the thesis that marketisation changes the object so marketised and that this change needs to me properly considered before privatisation and commodification of a thing is undertaken. Even if you disagree, listening to this audiobook will equip you with a good understanding of that position. The examples are interesting (and sometimes shocking), and by the end you grasp the author’s point perfectly clearly.

This is a great book. Sandel gives templates to rebutt or at least cause serious consideration of the claims of Utilitarians who claim we should accept markets as miraculous engines of decision making. He is sharp and entertaining. Well worth the effort. Check out Alisdair McIntyre's virtue ethics work for an intro into these ideas.

Very important book in our age of market dominance

I very convincing argument is put forward by Sandel that markets ultimately change the nature of the goods exchanged thereby changing meaning and actually degrading some long held norms like civic virtues. This is of great concern as Sandel maps the increasing pervasiveness of market thinking and market fundamentalism in society. What makes the situation worse is that new market intiaitves are usually debated on the grounds of fairness and whether free choice will really be free. Sandel warns that this is not enough and that we must not shy away from actually assessing the moral worthiness of the new intiaitve and it's only after deliberating over these matters that we can determine whether a market should exist or whether something may be corrupted as a result and therefore left to be regulated by non market norms. As Sandel rightly observes "shrinking from these questions does not leave them undecided. it simply means that markets will decide them for us....The era of market triumphalism has coincided with a time when public discourse has been largely empty or moral and spiritual substance. Our only hope of keeping markets in their place is to deliberate openly and publicly about the meaning of the goods and social practises we prize."