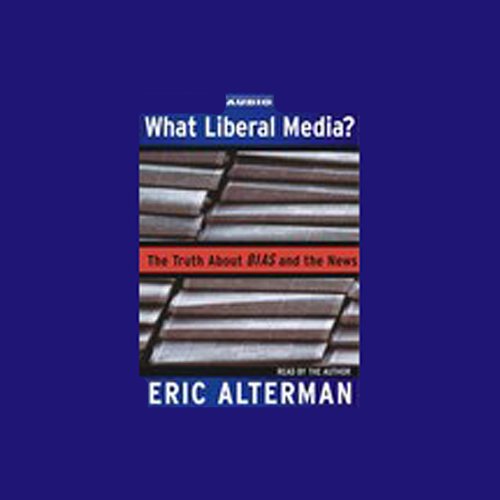 Is media bias keeping us from getting the whole story? If so, who is at fault? Is it the liberals who are purported to be running the newsrooms, television and radio stations of this country, duping an unsuspecting public into mistaking their party line for news? Or is it the conservatives who have identified media bias as a rallying cry around which to consolidate their political base? The media has become so large and so pervasive in our lives that regardless of exactly where on the ideological fence you sit, the question of media bias has become all but unavoidable.

What Liberal Media? confronts the question of liberal bias and provides a sharp and utterly convincing assessment of the realities of political bias in the news. In distinct contrast to the conclusions reached by Ann Coulter, Bernard Goldberg, Sean Hannity, and Bill O'Reilly, Alterman finds the media to be far more conservative than liberal. The fact that conservatives howl so much louder and more effectively than liberals is one big reason that big media is always on its guard for "liberal" bias but gives conservative bias a free pass.

After listening to What Liberal Media? you will understand that the real news story of recent years is not whether this newspaper, or that news anchor, is biased but rather what extent the entire news industry is organized to communicate conservative views and push our politics to the right - regardless of how "liberal" any given reporter may be.

"A sobering reminder that TV long ago abandoned serious journalism and that watchdogs and skeptics are thin on the ground in all media - bad news for those who believe a vibrant, informative press is one of the bedrocks of democracy." (Kirkus Reviews)
"Whatever your politics, Alterman delivers well-documented, well-argued research in compulsively readable form. This book will be required reading for anyone in politics or journalism, or anyone curious about their complicated nexus." (Publishers Weekly)
"Eric Alterman...has jumped into the ring and taken off his gloves. (The New York Times)

What listeners say about What Liberal Media?

What Liberal Media by Eric Alterman

Painstakingly researched and eminently fair, this well written research project is long overdue. Alterman debunks, quite thoroughly, the notion that the media have a meaningful left leaning bias. Indeed, he shows that conservative interests are represented in the media in much great propensity than is the conservative viewpoint among the population in general. In short, he shows that liberal media are few and far between and conservative media are ubiquitous.

Eric Alterman's "What Liberal Media?" is a mostly interesting liberal view of the almighty media. Certain points of the book appear very long winded and downright boring. It's not the subject matter that is dreary but Mr. Alterman's speaking technique that makes me fall asleep at the wheel. (Caution: Do not listen to this book if you have a long commute or during a road trip. You'll be sorry.) His slight lisp and monotone drove me up the wall. Instead of LISTENING to the book, just pick it up and actually read it. 3 stars for the subject matter. 2 stars for the audio aspect.

Eric Alterman set out to alter the debate on the public media, and the so called "liberal" nature of media bias. His efforts are pursuasive in this long overdue book.

The media has long been chastised by the well-funded conserative groups. The consistency and volume of their complaints has made the farse of "liberal bias" in the media a matter of common sense. Eric Alterman systematically looks at all aspects of the media news: radio, TV, newspapers, magazines; and systematically disproved the notion of liberal bias. In fact he demonstrated just the oppoposite, that the media has become so afraid of the allegation, that conservative bias has become mainstream.

As evidence, the Bush administration routinely gets away with things that would have hammered his predecesssor, Clinton. Reporters cannot even grill the administration on sensitive issues, for fear of being thrown out of exclusive press conferences. And name one nationally syndicated liberal pundit on radio.

The situation is so severe, that we can no longer have an intelligent, balanced public debate on important issues. Criticism of administration policy has become synonymous with being unpatriotic, or worse, a traitor. Fortunately, the Bush administration's grip on public debate cannot last forever. But whether democracy ever recovers remains to be seen.

Preaching to the choir

The best thing that author Eric Alterman could do for his next work is to have someone else read it. While he makes some good points (nothing new to someone who actually pays attention or is a fan of Mark Crispin Miller), his voice is awful.

Unlike the people who gave "Slander" a one star rating without reading it, I actually read this elitist and taxing stretch of an argument. The author actually contends that CNN, ABC and that dangerously politically correct medium of Marvel Comics are conservative tools. He deserves points for courage. His attempt at making this case must have been a gargantuan undertaking. He simply must be a glutton for punishment and you will be too if you, like I did, force yourself to to finish the book. His girly man voice made me think he probably got beaten up a lot in high school as he probably had one of those, Flock of Seagulls haircuts. I don't suggest this book if you are only an occasional reader, there are tons of better political books out there, e.g. "Treason", "Bias", "Slander" or "Behind the Oval Office", if you lean to the left. Admittedly, this book is better written than that autobiography "Stupid White Men" however, the main premise behind this book insults what, according to the author, must be my lying eyes.

The book does make interesting points but has become outdated and does not reflect the current state of media.