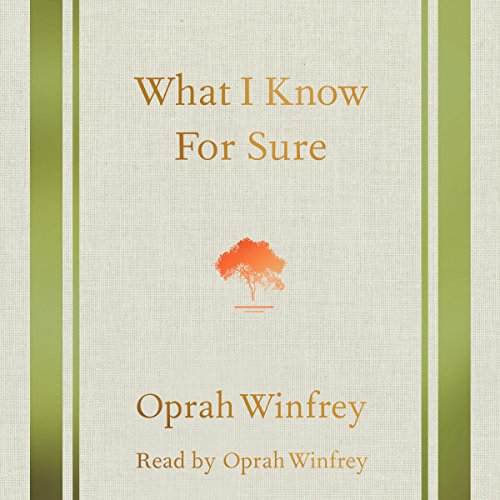 What I Know for Sure

The inspirational wisdom of Oprah Winfrey, collected for the first time in a beautiful book. After film critic Gene Siskel asked her, 'What do you know for sure?' Oprah Winfrey began writing the 'What I Know For Sure' column in O, The Oprah Magazine. Saying that the question offered her a way to take 'stock of her life', Oprah has penned one column a month over the last 14 years, years in which she retired The Oprah Winfrey Show (the highest-rated program of its kind in history), launched her own television network, became America's only black billionaire, was awarded an honorary degree from Harvard University and the Presidential Medal of Freedom, watched friends and colleagues come and go, lost beloved pets and adopted new ones, and celebrated milestone birthdays. Throughout it all, she's continued to offer her profound and inspiring words of wisdom in her 'What I Know For Sure' column in O, The Oprah Magazine. Now, for the first time, these thoughtful gems have been revised, updated, and collected in What I Know For Sure, a beautiful book packed with insight and revelation from Oprah Winfrey. Organized by theme - joy, resilience, connection, gratitude, possibility, awe, clarity, and power - these essays offer a rare and powerful glimpse into the mind of one of the world's most extraordinary women. Candid, moving, exhilarating, uplifting, and dynamic, the words Oprah shares in What I Know For Sure shimmer with the sort of wisdom and truth that listeners will turn to again and again.

What listeners say about What I Know for Sure

Amazing, everyone should read this book... So much practical wisdom to start apply immediately. I love it and I'll be coming back often when I need to.

I kept going back to some phrases and chapters until I gave up and listened to it all over again lol...and then again 🤦🏾‍♀️😅. Thank you Oprah

I’m 30years old. I know my future self will thank me for reading this book. Thank you Oprah for this lovely open book

it's Oprah, you gotta read this book. if you're an Oprah fan like me, you'll absolutely cherish it!!

Truly a book of wisdom!

A book full of great inspirational quotes. Great for bedtime when you want to take time to reflect deeply and ponder over your life. Will definitely listen to it again. Highly recommended!

Beautiful inspiring book . Well read by the author.
I will certainly listen to it again.

Thankful to have read this book!

I loved it. many lessons to learn. this is a book that one has to share with others. looking forward to our bookclub review. well narrated

would recommend to everyone

Just what I needed to hear right now

I'm a big believer that books come across your path at the right time. And this is a little gem of wisdom from an amazing person.

what I know for sure

Well I know for sure that Oprah sure knows a thing or two about being true to who you are and walking in your complete self. Worth a read and a good standby in your book collection. Listen on audio, even better.

I feel like I've learnt so much from her. I didnt realise how inspirational she was until this audiobook:-)

I knew I was going to be mesmerised by Oprah.. that's the expectation I bought with the book. Oprah. gives an honest and practical view on her life. you can feel the love in her voice and soul.. Thank you Oprah..

Marvellous, I dont get tired of listenning at it once and again! And everytime there is something new to realise and think about.

This book is nothing short of brilliant. I have never really followed Oprah nor read her magazine "O" - but this book, made up of 14 years worth of her column from her magazine has opened my mind to looking more into what Oprah has to offer. I will listen to this book over and over again. It is excellently narrated by Oprah herself. I have also ordered the book in hard copy for five of my friends. Highly recommended.

Will listen again and again. Such inspiration and wisdom. Listening to Oprah moved me and I can't wait to relisten. This is a must download.

If you love Oprah, and the kinda content she divulges into... this is for you. An extension of her Super Soul Sunday classes. I really liked it. Excellent easy listen tSundau Sund relaxing afternoon.

Loved this book so so much. Makes me want to change the way I live my life, for sure!

There are some real gems in this book as Oprah shares her experiences. Simple, profound and achievable!

Loved the book. Was even better because Oprah read it. Want to listen again and I just finished it. Well worth listening too.

A wonderful book based on Oprah's experience narrated in her wonderfully hypnotic, relaxing and familiar voice. She shares her lessons learned in life and business that you can take and impart in your life. Very easy to listen to with wonderful messages that resonate. I will be listening again and again.

i enjoyed this eveb more than I thought I would. Oprah really is one switched on lady!

Oprah tells a great story, there is humour and lots of life lessons. loved it

Just a collection of thoughts

I was looking for something more, but it’s really the same old collection of spiritual thoughts from someone that is a little bit removed from the real world.

You won’t find anything in this that you haven’t already heard in any other business or self help book.

Oprah does a great job of reading it, and I can’t fault her performance. It is still engaging, it’s just that I found the content lacking.

If you love her, you will love this .
If you don't then you won't.

This is such a wonderfully thoughtful and humble book. Would highly recommend to everyone to read!

What a fabulous book, so many pearls of wisdom. Thank you Oprah, so much respect!!