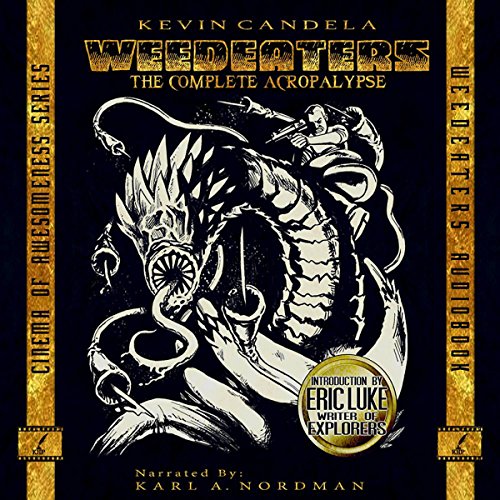 By: Kevin Candela
Narrated by: Karl A. Nordman
Try for $0.00

Here it is: the blood-and-sap-splattered epic of gritty, wisecracking survivors turned mutant warriors in a global apocalypse against gigantic man-eating...dandelions.

One sunny morning, the world awoke to the revenge of their own well-manicured lawns: Seeded by chemtrails and radiated by black-ops satellites, innocent little weeds swelled to massive size and uprooted themselves from the broken earth and raced off hungrily toward their new menu - mankind!

In the wake of the devastation, the survivors soon discover they will have to go to some truly bizarre extremes if they hope to avoid species extinction. Featuring all five action-packed stories originally appearing in the star-studded Straight to Video anthology series, this special edition also includes a bonus installment "Weedeaters 2.5" never before appearing in print.

What listeners say about Weedeaters: The Complete Acropalypse

Don't eat your vegetables, they bite back!!!

Candela is the man to go to if you are looking for funky fresh freaky fun. I never know what to expect, and the titles only give you the merest clues as to what he has concocted in that blender he calls a brain. An Acropalypse, that is a new one on me. I know Zompocalypses, Robopocalypses, Blobocalypses, Eucalyptuses, and Santapocalypses, but never an Acropalypse. I have to respect that. This book makes Day of the Triffids look like Attack of the Killer Tomatoes.

This is one of those books that makes your head swim when you consider that someone not only thought that a story about hungry dandilions who eat people thereby forcing said edible people to become hybrid plant people in order to survive was something that should be written about, but actually pulls off such a crazy concept and makes an amazing story. I must give credit for original and creative imagination. Candela can probably site five movies, books, and tv shows that he will claim inspired this magnificent mess of chlorphyll killing machines, but only he could come up with something like this and execute it to such perfection. Where else will you find a character named King Space Ninja, who is a human plant hybrid? (That reference is just for Kevin!) No where!

Nordman plays this so straight I think there might be some non-euclidean geometry involved, and that makes this all the more real and fun simultaneously. Candela seems to have a knack for picking just the right people for his stories, and this is no exception. He was very easy to listen to, and drove the story forward when he could have easily gotten sidelined by all the craziness involved. He plays this like a pro, and like Forrest Gump, he doesn't stop once he hits the end zone.

If you like old B movies such as Little Shop of Horrors, The Ruins, or even Invasion of the Body Snatchers you will totally dig this book. It might have a B movie feel, but is an A+ in my book. Writing, action, plot, characterization, and pure silliness of it all makes for one stunning listen. I wish I knew how to read so I could read this book! Wait, that came out wrong. I wish I had TIME to read, so I could read this book, but I suspect that without Nordman's amazing narration it wouldn't be the same in my head. Take a chance and pick this title up now, and I assure you that once you finish it you will want to get even more of Candela's material. Get it now, also, buy several 55 gallon drums of Round Up, too; just to be safe.

This genre generally is not in my wheel house. But when this book came highly recommended, I decided to gave it a whirl.
Like any B rated movie, it was a bit cheesy, funky funny, and the story line was a little weak in some areas. However, the narrator bridged the gap and kept the story interesting, drawing me in and kept me on the edge of my seat wanting to know what happens next. Each characters voice is very distinguishable and the sound effects are fantastic!
Over all, worth the listen.

Kevin Candela comes up with the weirdest stories! He is a creative genius. Plants going on a rampage? Yes!!