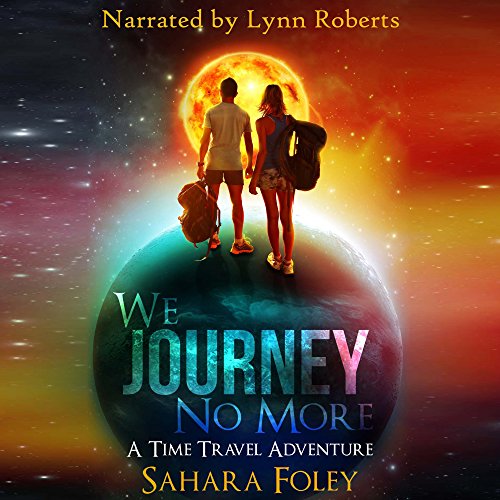 We Journey No More

By: Sahara Foley
Narrated by: Lynn Roberts
Try for $0.00

When runaway teenagers Don and Janet pull off the mountainside road just outside of Albuquerque for a few hours' rest, they don't expect to wake up 1000 years in the future, in a world they can't recognize.

There, Earth is a desert planet where nomadic tribes are little more than slaves to the Ganu, the powerful and dominant ruling tribe.

When the young couple is befriended by a small tribe, and Don is hailed as their mythical and prophesied savior, they must use all their cunning and resourcefulness to defeat a powerful, cruel enemy and save the lives of their new friends.

What listeners say about We Journey No More

This is a great story of two older teens who ended up over 1000 years in the future and over 900 years after a great cataclysm. Some humans survived while other humans and all of the animals have mutated. I absolutely loved this story but I wasn't too crazy about the narration.

This is one of the most different books I have listened to in quite a while. I honestly had no idea where the story was going, but it turned out really good - well worth a listen. The title does actually sum up the fact that this was a journey and that it had all kinds of twists and turns that I don't think the characters wanted to make.

The narrator did an outstanding job of reading and the writer led me on a fun adventure that was very interesting yet thoughtful.

This audiobook was provided by the author, narrator, or publisher at no cost in exchange for an unbiased review courtesy of Audiobook Blast. However, I did thoroughly enjoy the book and would have no issue telling you otherwise. It was actually a great change of pace from what I normally read.

What a fun story! I loved the premise and felt that Foley did a great job executing it. I laughed out loud at the " petroleum jelly" part, and loved that Don was more embarrassed than Janet.

The narration took a bit to get used to. I think the feeling I had was that it was kind of robotic. There was a change in tone for each character, which was really good. It was the in between narration that felt a little stiff.

I was lost in the story by the second chapter and have to say that I would definately recommend this to my other reader friends!

Its the end of the world as we know it - Story

This is a very good older YA story with lots of action and fighting. The sex is a little graphic, which is why I say Older YA. The story appeals to Adults too. It depends on your genre preference.

Don and Janet are sleeping in their car that is engulfed in a time portal. They wake up in their car and are now in the apocalyptic future. Luckily, Don and Janet come across a tribe that helps them. The superstitious tribe thinks technology is magic and that Don is the savior from a tribal prophecy. Don and Janet help them by using their common knowledge from the past. Janet is a strong female lead. I like that. It is not all about Don. There is a great balance between both of these characters.

There are crazy rituals and laws. Don and Janet are going to help change things. Mutants are running around. I just want to say…..Those are some VERY fast lizards. I think the fact that the car made it into the future with them inside was a nice idea to include. In stories of this genre, the biological bodies are the only ones that make it through portals. That is one tough car.

This is a very good story that is like combining "The Time Machine", "Mad Max", "Dune" and “The Signal" with Lawrence Fishburne. Of course, it is definitely different from all of these stories. A story with the computer geek and his girlfriend taking a trip and waking up in a possible future is a little familiar.

I really liked this story. I have referred this to several friends that like this type of post war survival themes. I was wondering if the fact that the planets are different might mean that they are in an alternate or parallel dimension. That idea kind of stuck in the back of my mind at one point.

If you could sum up We Journey No More in three words, what would they be?

This audiobook was provided by the author, narrator, or publisher at no cost in exchange for an unbiased review courtesy of Audiobook Boom

Yes I would recommend this

Never quite sure what's around the next corner. Who or what you might encounter. I laughed when Don thought bad baloney could be the problem, not liking baloney myself I could understand that. Must listen story if you like fantasy, sci-fi.
I was given this audio in exchange for an honest review

For me, this book was slow taking off but once they got to the camp it started picking up. I enjoyed the ingenuity of the battle plan and the weapons. I wouldn't mind seeing a follow up book to complete the story. This audiobook was provided by the author, narrator, or publisher at no cost in exchange for an unbiased review courtesy of AudiobookBlast

I enjoyed listening to this book. Don and Janet somehow end up traveling through time and wind up in a future world after an apocalyptic event. Hormones raging and some 17+ material though not too graphic, I did find myself scrambling for the volume rocker in front of my 8 year old once (so heed this warning!).

Narration was pretty good. Most of the voices were discernable from each other. I found the conversations to be pretty straightforward and I did wonder on occasion if people really spoke in this manner. Then I remembered hearing conversations involving teens, and suddenly the plausibility factor grew exponentially.

The book is only a little more than 5 hours long, so the author doesn't have a lot of time to answer all of the questions that come up. Why things work, how/why something happened, etc. I don't really like when books end with so many questions, but in this case, it really didn't take away from the story.

The book was pretty fast paced throughout. Pretty good descriptive writing and some good character development. Not a lot of time is spent building the scenery or the backstories. But in a book like this, I consider that a good thing.

Definitely an interesting idea, and fun to go through the adventure with Don and Janet.

I received a free copy of this audio book for an honest review.

We Journey No More: A Time Travel Adventure reviee

Would you consider the audio edition of We Journey No More to be better than the print version?

The characters and plot of this story, time travel.

Which character – as performed by Lynn Roberts – was your favorite?

I love time travel stories, and I was really looking forward to this one. Unfortunately, it was far less than I was hoping for. The two main characters are sound and act more like pre-teens than older (almost adult) teens. I didn’t feel any connection to them at all. The dialogue felt stilted and spoken not at all how real people speak. I really disliked the parents of the teens, but I guess that was the point.

What I did like about the book were the tribal characters they end up meeting and defending. They were more lively and more lovable than Don and Janet.
I really loved the humor in the story more than anything else, especially how Don was so highly revered, him being from “The Kansas” and all. That was really the best thing about this story.

I listened to the audio version, and the narration was horrible, with constant emphasis on the wrong words that drove me nuts. I may have liked the story a wee bit better if I had read the printed version.

Narrator put me to sleep. book is poor. characters are dumb. story is below average.