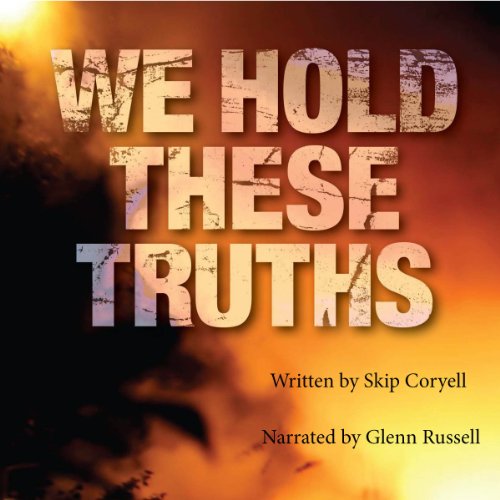 We Hold These Truths

By: Skip Coryell
Narrated by: Glenn Russell
Try for $0.00

After Hank Simmons caught his wife cheating with his Editor, he fled the hustle and bustle of the big city, and moved away with his four children to a small one-horse town in Northern Michigan. All he wanted was a little peace and quiet, and a safe and happy place to raise his children. Hank bought the local newspaper, and all was well . . . until . . . nine-eleven. And then the peace and tranquility of small-town America is suddenly shattered when a terrorist cell group from Detroit is infiltrated by FBI Special Agent Richard Resnik.

Agent Resnik, hot on their trail, follows the terrorists to Grand Rapids, but he underestimates the leader, Momin Islam, who attempts to detonate one of two nuclear suitcase bombs, and then flees north, with Agent Resnik in pursuit. Everything comes to a head when Momin stops in Freidham Ridge for gasoline and a simple bite to eat. Agent Resnik is compelled to join forces with Hank and the townspeople as they fight to capture the terrorist and prevent him from exploding the second nuclear suitcase bomb. Through the course of conflict, Hank and the other townspeople are forced out of their small, secure worlds, and now must look at things in a global way, where black and white no longer seems cut and dried. Read this geopolitical, redneck thriller and find out what happens when the Mideast meets the Midwest.

What listeners say about We Hold These Truths

I loved this book. I would recommend this book to anyone. the only thing I would change is the person reading it.

I have read Skip Coryell before. His socio-political leanings are an intricate part of the weave of his stories. That is not problematic for me.

His Christianity, which is also pronounced, is part of why I have listened more than once. It's one of the things I search for when reading or listening to fiction.

However, I will probably not listen to any more of "We Hold These Truths." I have struggled through about half of it and find Glen Russell's narration so monotone and bland that it is annoying.

Although it has unrealized potential, the overall effect of this work (at least up to the half-way point) is a snooze fest . Perhaps it would have been a passable read--not great--just passable. As a listen, however, it has been thoroughly disappointing.

I'm glad I've already listened to a couple other titles by Coryell. If this had been the first, it would also be the last.