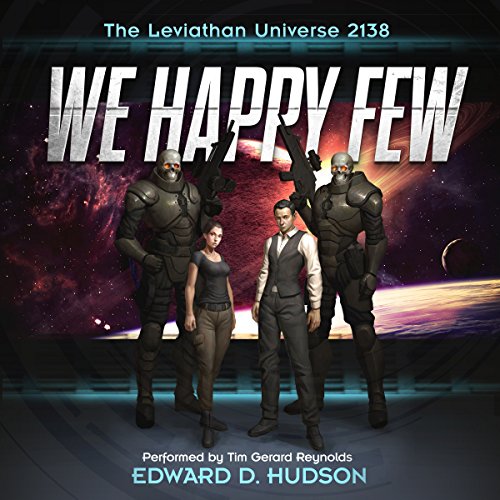 Robert Taylor Ford is a renowned Shakespearean actor, delighting the galaxy as he masterfully plays his parts. But when his girlfriend and co-star turn up dead and he is accused of the crime, Ford narrowly escapes arrest aboard the starship Pegasus, only to be attacked by space-faring pirates.

His hope of freedom dashed and facing death from seemingly invincible armored brigands, Ford takes on the most dangerous acting role of his life. If he fails to convince his new audience, this next performance will be his last.

What listeners say about We Happy Few

Actor on the run gets shanghaied by space Pirates.

Would you consider the audio edition of We Happy Few to be better than the print version?

What was one of the most memorable moments of We Happy Few?

That would spoil the story.

Reynolds does a good job of giving the characters personalty. Hes not a wooden reader tells the story at a natural pace, Good narrator.

Good debut novel. The author does a good job of keeping you in the story . Like bacon, Everything is better with pirates.

* there is no princess in this book

This new author gives us a fun science fiction story with lovable characters and an unlikely hero that sometimes, might just need to be rescued by the princess... well, sort of. The storyline and premise are solid ideas in the, "This could happen to anybody" sort of way that always makes it a little scary. No doubt, the authors military experience gives these pirates a clinical sophistication of form and function that makes them seem like a well organized, for profit, company in the business of looting.

This might make a great movie as I can picture while I'm reading, all the beautiful views of open space, the frightful costumes the pirates wear, the futuristic space ships, and the opulence of that passenger carrier's first class decks. Some of these things would be easier in video, like all the new technology that needs to be described to the reader but is commonplace to those of 2138, and of course roughneck pirates engaging in fights with frightened passengers. The author does a great job describing these things in detail to us.

The Audible version has a nice fluid reading to it and is worlds better than the monotone computer voice that comes with Kindle.

The book starts with very few characters and seems heavy on descriptive details. At first I thought I might not like it, but I hung in there and was rewarded. This story is an adventure I definitely want to be on. So, I'll be awaiting the next book, and hopefully many more in this new series.

Excellent narrator for English empire themed pirates in space book. It's a bit shorter than I normally go for in audible, but the story flow was excellent, no dragging chapters, and I want to read more about the characters and the universe they live in.

Robert Taylor Ford, the acclaimed Shakespearean actor, is accused of having murdered his girlfriend and her lover. Robert needs to escape and boards the Pegasus without giving too much thought to where he is going. Just his luck the Pegasus is attacked by pirates.

First of all, I would like to say that this book was not what I expected, so my review could be tinted with that feeling of not getting what one thought at first. In a book set in the future, I did not expect the society where Robert lived in to be an almost Victorian society, where not only her Majesty was the ultimate power, but there was also an aristocratic smell all over the place. It’s not that I don’t enjoy these aspects in a story, but they feel out of place for me in a science-fiction book.

I found the first part a bit slow. We start with Robert thinking about committing suicide when a police agent miraculously decides for him that he should escape the authorities because he must be innocent. I don’t know, but this felt forced and not at all realistic.

Before the Pegasus is boarded by pirates, there is a slow part where some of the secondary characters on both ships are introduced. That part felt too long for me, and there are a bunch of names thrown at us almost at once which got me a bit confused.

The rest of the book is quite entertaining, and here it’s where we see Robert’s evolution and his interaction with the rest of the crew.

Something that I found odd, but could very well be connected to the Victorian feeling of the book, is that there are no important female characters. There are exactly three female characters in the book, and they are barely more than decoration: two of them are interested in Robert and only know how to show cleavage, and another one gets romantically attached to one of Robert’s friends. Nevertheless, there is little character development in general, and I was unable to connect with any of the characters, probably also due to the fact that they were all not very likable. For instance, I couldn’t stand Doctor Drake at all, and he was Robert’s friend.

It’s never clear in the story whether Robert killed his girlfriend or not, which makes me think that he did. He starts to show some character toward the end of the book since for the whole story he just happens to suffer anything that comes his way. This is one the things that probably failed for me. If the main character in the story didn’t care about what happened to him, how could I?

I enjoyed Tim Gerard Reynolds. I think narrating a book like this one is not an easy task, with so many characters Reynolds not only gave them different styles but used accents to distinguish the characters from the Pegasus and the pirate crew.

I’m glad that I listened to this book but unfortunately, I failed to see what the fuss was about. There will probably be more character development in future books, but as a first approach, it was just okay.

Audiobook was provided for review by the author/narrator/publisher.
Please find this complete review and many others at my review blog.
[If this review helped, please press YES. Thanks!]

This was a fun book, from a new offer that I will happily read again. Definitely worth checking out! What’s not to like, space pirates and plenty of action!

couldn't even get through the first seven chapters, I tried three times, so boring, don't bother

Not as good as the description

I was expecting a lot more from the book, that the description promised. Most of the book was pretty disappointing until the last one and a half hours where the book delivered what was expected from the publisher blurb