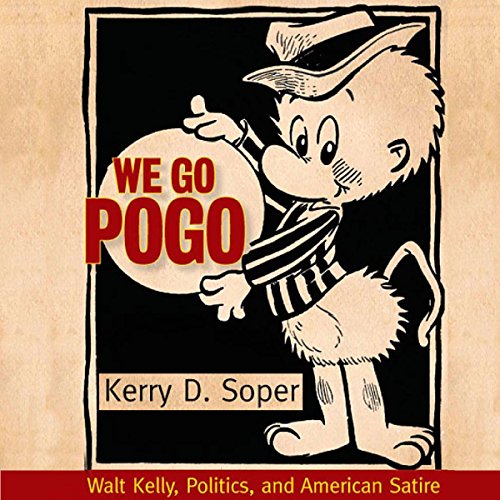 Walt Kelly (1913-1973) is one of the most respected and innovative American cartoonists of the twentieth century. His long-running Pogo newspaper strip has been cited by modern comics artists and scholars as one of the best ever. Cartoonists Bill Watterson (Calvin and Hobbes), Jeff Smith (Bone), and Frank Cho (Liberty Meadows) have all cited Kelly as a major influence on their work. Alongside Uncle Scrooge's Carl Barks and Krazy Kat's George Herriman, Kelly is recognized as a genius of "funny animal" comics.

We Go Pogo is the first comprehensive study of Kelly's cartoon art and his larger career in the comics business. Author Kerry D. Soper examines all aspects of Kelly's career - from his high school drawings; his work on such animated Disney movies as Dumbo, Pinocchio, and Fantasia; and his 1930s editorial cartoons for Life and the New York Herald Tribune. Soper taps Kelly's extensive personal and professional correspondence and interviews with family members, friends, and cartoonists to create a complex portrait of one of the art form's true geniuses.

From Pogo's inception in 1948 until Kelly's death, the artist combined remarkable draftsmanship, slapstick humor, fierce social satire, and inventive dialogue and dialects. He used the adventures of his animals - all denizens of the Okefenokee Swamp - as a means to comment on American and international politics and cultural mores. The strip lampooned Senator Joseph McCarthy during the height of McCarthyism, the John Birch Society during the 1960s, Fidel Castro during the Bay of Pigs fiasco, and many others.

"This is the real deal! Comprehensive, serious, and full of juicy tidbits on Kelly's life and career." (Jeff Smith, creator of the comic books Bone and RASL)

What listeners say about We Go Pogo