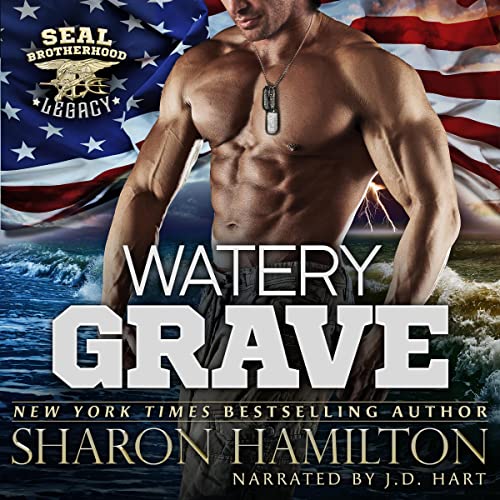 By: Sharon Hamilton
Narrated by: JD Hart
Try for $0.00

Another Navy SEAL Cruise? What Could Possibly Go Wrong?

Christy and Kyle Lansdowne receive a long-lost piece of luggage returned from a cruise vacation from Hell several years prior. Inside, lies the remains of SEAL Team 3 friend and former gym owner, Joseph “Gunny” Hoskins. Their mission was to release his ashes upon the deep blue sea, but their cruise was interrupted by a terrorist takeover of the ship, thwarted by the SEALs on board.

But when the ocean returns him to San Diego in Christy’s cosmetic bag, a new adventure is hatched to give Gunny eternal rest.

Kyle, Christy, and their three children embark on another memorial cruise mission, along with several other SEAL families. In paying tribute to the life of a fellow brother-in-arms, they usher in the dawn of a bright new future for them all. As the past is finally buried amid the dangers of the present, the ocean’s giant wheel - the Circle of Life - lives on.

In honoring the irreverent life of one, the bond and commitment of the brothers who remain is strengthened to do battle.

The SEAL Brotherhood: Legacy Series is about the original couples in Sharon Hamilton's popular SEAL Brotherhood Series. It furthers the stories of these couples 10 years later, after marriages, children, and separations. These are stand-alone books, but listeners who are unfamiliar with the series would enjoy listening to the background stories first.

What listeners say about Watery Grave

I loved the book! I also love this audio version. I thought the narrator was fabulous! I loved hearing the book and was able to visualize it like a movie in my mind. It was perfection for me! I was able to listen as I was waiting for appointments or doing errands. This book is a definite must have! The characters will steal your heart and keep you on edge with what unfolds as their story progresses. Check it out and see for yourself. I am so glad I took a chance and tried this audible book. It will not be my last!!!

Watery Grace was another fantastic SEAL book by Sharon Hamilton. It has everything a great romantic suspense book needs. There was page-turning excitement, alpha protector with hearts of gold, strong women, and a sexy story with a great happily ever after. I could not out this book down. You will love Kyle and Christy never ending love story. I love these team books where everybody feels like family. I can’t wait for more books!

OMG this was amazing, having read already this was a great bonus, loved JD Hart's voice, totally recommend ALL of Sharon Hamilton's books either reading or listening, thank you very much Sharon Hamilton, love you bunches, Dana Zamora

one of my favorite books!!!

I absolutely loved this audiobook and omg JD Hart absolutely is perfect for the seals and audiobooks. Sharon Hamilton is such an amazing author.

WOW! When Gunny’s remains are returned to Christy and Kyle years after they thought the remains had been relegated to the sea, members of Team 3 decide to to take another family cruise vacation and commit Gunny’s remains to the sea. Of course, no group vacations ever go as planned! Excitement, adventure, intrigue, family dynamics all entwine to make this a great listen! JD Hart narration is outstanding! Loved it!

I listened to the audiobook. The story was still as enjoyable as the first time. The narration was ok, nothing special. Maybe I would have enjoyed it more if there was a female narrator for the women's part. As it was, I didn't find Kyle sounding very SEAL like. I expected his voice to be deeper, more commanding. It wasnt. I was glad I read the book first.

SEAL Team 3 is at it again. Periodically, Christie and Kyle will make brief appearances in other books. I think this is the first time in a while that they appeared for the duration.

I enjoyed this book. It was full of fun (with the kids), adventure, action, and danger. Gunny still got his SEAL Team sendoff. Kyle and Christie got their romantic, steamy time that was all about the quality, not the quantity. SEAL Team 3 got to save the day again.

A good mix of a little of everything in a book that will keep you fully engaged from start to finish.

I voluntarily read and reviewed the Advanced Reader Copy of this ebook.

A cruise takes team mates to throw the ashes of their friend whose ashes were thought lost years ago. Then...adventure awaits.  A great listen, great narrator

I was first introduced to this talented author’s books when I read the SEAL Brotherhood series and fell in love with these honorable men. Knowing that this new series was centered about the original couples 10 years after, I was jumping with joy and was definitely not disappointed. I truly enjoyed the ebook version and as always, JD Hart brought the story to life making it even more enjoyable.
When the ashes of Gunny, a man SEAL Team 3 respected and loved are returned after being lost 10 years ago, Kyle, Team 3 LPO, and his wife Christy, plan a cruise to finally spread Gunny’s ashes.
Many members of the Team, and their families are happily enjoying the cruise . But when Kyle and his son Luke witness what appears to be human trafficking taking place in the bowels of the ship, Kyle begins to investigate. What started as a family vacation has turned into a possibility dangerous mission . Action and danger ensures in the middle of this ocean.
While the plot keeps you engaged, my favorite part in the book was once again visiting with the members of Kyle’s team. Men who had their own stories in previous books.
I am looking forward to more stories in this series.
I was entrusted an audiobook of this story. The opinions expressed are solely my own.