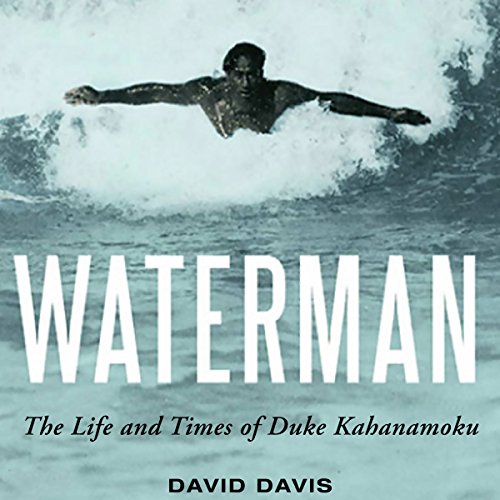 By: David Davis
Narrated by: Aaron Killian
Try for $0.00

Long before Michael Phelps and Mark Spitz made their splashes in the pool, Kahanamoku emerged from the backwaters of Waikiki to become America's first superstar Olympic swimmer. The original "human fish" set dozens of world records and topped the world rankings for more than a decade; his rivalry with Johnny Weissmuller transformed competitive swimming from an insignificant sideshow into a headliner event.

Kahanamoku used his Olympic renown to introduce the sport of "surf-riding", an activity unknown beyond the Hawaiian Islands, to the world. Standing proudly on his traditional wooden longboard, he spread surfing from Australia to the Hollywood crowd in California to New Jersey. No American athlete has influenced two sports as profoundly as Kahanamoku did, and yet he remains an enigmatic and underappreciated figure: a dark-skinned Pacific Islander who encountered and overcame racism and ignorance long before the likes of Joe Louis, Jesse Owens, and Jackie Robinson.

Kahanamoku's connection to his homeland was equally important. He was born when Hawaii was an independent kingdom; he served as the sheriff of Honolulu during Pearl Harbor and World War II and as a globetrotting "Ambassador of Aloha" afterward; he died not long after Hawaii attained statehood. As one sportswriter put it, Duke was "Babe Ruth and Jack Dempsey combined down here."

In Waterman, award-winning journalist David Davis examines the remarkable life of Duke Kahanamoku, in and out of the water.

What listeners say about Waterman

This book and it's stories fill a unique place in my personal being. I live in and grew up in Hawaii and know most of the places, people and events described in this book. I was 8 years old when the Duke passed, the same year my Parents signed me up as a member of the Outrigger Canoe Club. I also have a deep connection with the ocean and the variety of activities it offers. I love all things Hawaii and accept the good it has to offer while tolerating its negatives. If you are an American, The Duke lives in all of us in some unique way, read this book and find out your connections. If you're from Hawaii and listen to it, prepare yourself for the annunciation of some of the Hawaiian Words and places, they're not quite on, the narrator should've consulted the Bishop Museum or Kamehameha Schools. But, Thank You David Davis for Sharing this book with the world. Aloha and Mahalo, CW

I truly wish I could express my feelings & thoughts brought up during & after listening to his story. It seems to be well thought out & researched. I certainly won’t check out the validity of it, both the good or the bad. Some would argue that I just heard what I wanted to hear. But I would argue that nothing I have ever read, seen or heard about Duke Kahanamoku would contradict any of the great & wonderful things he accomplished or embodied. As a surfer & swimmer & mainly as a man I could not think of a greater example of all three than The Duke. The magnitude of his feats are awe inspiring, but his calm, gentle & dignified manner should be admired & emulated by all.
Aloha & mahalo 🐬🌈🌺