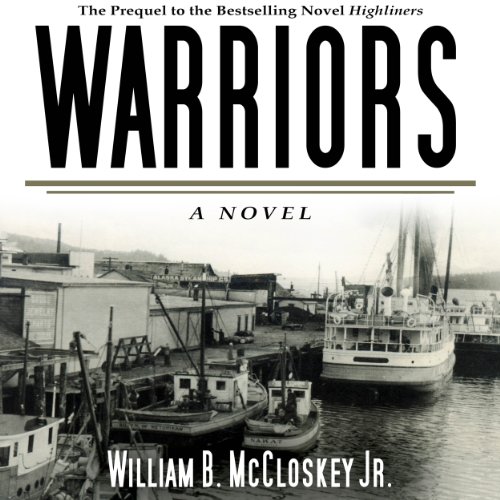 A Novel
By: William B. McCloskey Jr.
Narrated by: Aaron Abano
Length: 14 hrs and 13 mins
Categories: Fiction, Contemporary
3 out of 5 stars 3.0 (1 rating)

By: William B. McCloskey Jr.
Narrated by: Aaron Abano

The long-awaited prequel to the best-selling Highliners saga.

William McCloskey is back and better than ever in Warriors, the potent new prequel to Highliners, Breakers, and Raiders. Long before Hank Crawford arrived in the waters of Ketchikan, his partners and compatriots were already in love with its shores.

Following the final, crushing moments of World War II, Japanese officer Kiyoshi Tsurifune, Sergeant Jones Henry, and Resistance fighter Swede Scorden struggle to regain normalcy and any contact with the shimmering, fish-filled sea. Lost honor, fallen friends, their cultural identities gone in the wake of a nuclear blast - these fishermen-turned-soldiers have a long way to go till they regain the waters in which they feel most at home.

But as each finds his way to the bays of Alaska - Jones as fisherman, Swede eager for work in the cannery, Kiyoshi an ambassador for the Japanese trade - things aren’t as smooth as they had dreamed. A new union calls for a strike during the height of the salmon season, and expensive new engine boats are replacing the sails and oars fishermen like Jones Henry have relied on for years. Plus, unhealed wounds make the looming deal between Alaskan fishermen and Japanese buyers painful for many. Behind every conversation, the question looms: Will these war-torn men ever find their peace again?

Sweeping and powerful, like the pull of the ocean, Warriors is a novel that can’t be paused and that can never be forgotten.