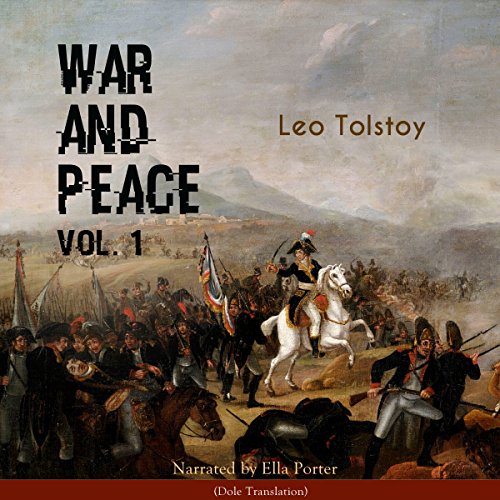 By: Leo Tolstoy
Narrated by: Ella Porter
Try for $0.00

"War and Peace" (1869) is a classic novel by Leo Tolstoy, which is regarded as a central work of world literature and one of Tolstoy's finest literary achievements. The novel chronicles the history of the French invasion of Russia and the impact of the Napoleonic era on Tsarist society through the stories of five Russian aristocratic families.

Volume One begins in 1805 in Saint Petersburg, at a soirée. The plot moves to Moscow, contrasting its provincial, more Russian ways to the more European society of Petersburg. The story continues at a country estate, and then Tolstoy describes the impending Russian-French war preparations. The major event in the book is the Battle of Austerlitz, portrayed as an early test for Russia, which ended badly because the soldiers fought for irrelevant things like glory or renown rather than the higher virtues which would produce, according to Tolstoy, a victory at Borodino during the 1812 invasion.
©2017 Audioliterature. Translated by Dole (P)2017 Audioliterature
Classics Historical Fiction
Show more Show less

What listeners say about War and Peace 1

Tolstoy is a vibrant writer with great details. The narrator speaks in a monotone voice and has no clue of French or Russian pronunciations which distracts from the book. It is unnecessary to announce Author, title, translator, volume and chapter at the beginning of each chapter.

The book is obviously good, but this narration is the absolute worst in the 50+ books I've listened on Audible. The reader does not speak either Russian nor French, and could not bother to learn the pronunciation of even the most famous people's names or common phrases. Why not use the opportunity of an audio book to correctly pronounce the names of a few of the central characters in order to share that with readers? One can find that info on wikipedia. Plus it is a sing-songly strange tone throughout which doesn't fit any of the characters. It's almost un-listenable. Also, after every single chapter they announce the title of the book, the author, and the translator. That breaks up the story and just adds to the jarring and unpleasant narration.

I had hard time to follow the book, poorly narrated. I had to drop it off

Tedious transition for the chapter headings .

The title, translator, chapter numbers called out at the beginning of each chapter. Distracting, Boringnotneeded.

Lifeless narration and weird repeat of title at each chapter

I couldn’t endure more than 7 hours of this book. The narration has no inflection. Would be great if you were listening before bed to get you to sleep. The worst part is the narrator repeats the title and author at the beginning of each chapter. It’s maddening.

Slow, deadpan, in need of decongestant.

I had to turn it off after a few moments. Reader was monotone, s l o w and needed some mucinex or a vaporizer or something. Sounded congested. Wishing I had listened to a preview instead of automatically downloading.

It's okay a little monotone for performance though

I great story from a history perspective but the performance to me needed more character identification it was at times to keep up who was with then Russians and who was with the French, but still a good book.