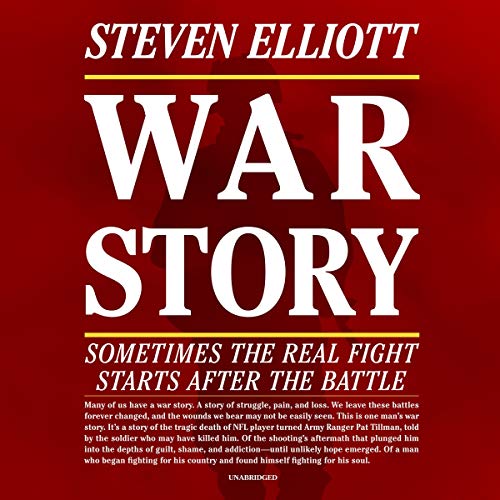 By: Steven Elliott
Narrated by: Chris Abell
Try for $0.00

Every soldier has a war story.

Steven Elliott’s opens with the death of American hero Pat Tillman by “friendly fire” in Afghanistan - when Army Ranger Elliott pulled the trigger, believing he and his fellow soldiers were firing on the enemy.

Tormented by remorse and PTSD in the aftermath of Tillman’s death, Elliott descended into the depths of guilt, alcoholism, and depression; lost his marriage and his faith; and struggled to stay alive. The war that began on foreign soil had followed him home.

A must-listen for veterans and their loved ones, War Story is an explosive look at the chaos of war - and the battle for life in its aftermath. It confronts some of life’s biggest questions: Why do we choose to fight for a country or a cause? What happens when the cost of that fight overwhelms and destroys? Can we forgive and be forgiven? How do we find hope? At its core, War Story is a dramatic personal encounter with war and faith, love and tragedy, and ultimate renewal.

What listeners say about War Story

What a amazing book with such good story line of the ultimate highs to the very lows. This was a very eye opening book and has changed my perspective towards our men and women who go to war.

As a little sister to a combat veteran who is currently facing his battle scars 15 years later, I’m holding on to this book for dear life. It gave me hope, it shifted my focus back to our Creator and it gave me insight to the horrors he is facing. Thank you for your honesty and thank you for your service. You’ve given veterans and veterans families hope.

The trauma of war has many aspects.

Before, during and after events in combat the effects of those events last for many years. This was a good account of how our lives are changed forever. We go on seemingly successful but haunted by war and our participation. There is help but best given by those of us who have been there.

Good enough to listen to

I had a lot more hope for the usefulness of this book, but was a little let down. Elliott probably never had any business going to war if having one combat experience (that’s all he described in the book) has left such indelible scars on him. It is very sad all that he has went through while suffering with ptsd, but after claiming to get right with the Lord he continues to remain an alcoholic without even attempting to deal with that issue. If your demons are still tormenting you, you need to quit inviting them in! I hope in time mr Elliott will overcome all his troubles.

Christ's Mercy In the Storm

There's nothing like a story of the Jesus's mercy in the midst of a horrible storm. Steven Elliott went through an absolute nightmare as one involved in the friendly fire death of Pat Tillman. The guilt and shame he feels overcomes him. He shuts down in the midst of his PTSD. The reader can feel his isolation, grief, and utter devastation at the event. And trying to hide behind the facade of normalcy. Thank you Steven Elliott for your candor and vulnerability in spite of such trials. Chris Abell does a wonderful job narrating. What a story. One we cannot get enough of in this world of brokenness.