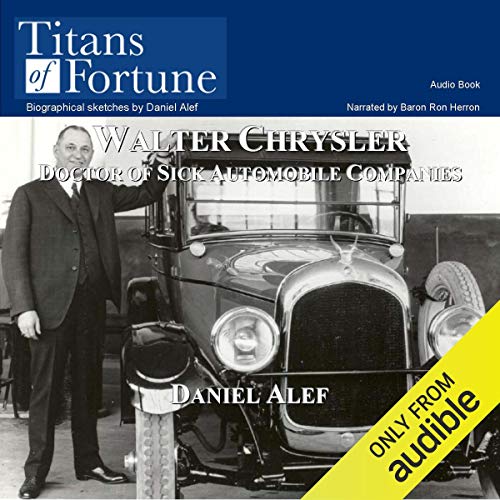 By: Daniel Alef
Narrated by: Baron Ron Herron
Try for $0.00

Here's a biographical profile of Walter Chrysler, the pioneer automotive genius who established one of the iconic brands in American automobiles and was known as "Mr. Fix It" for his uncanny ability to fix sick automobile companies.

The Chrysler Building is one of the most recognizable icons of New York City; the Chrysler name, a symbol of American automotive ingenuity, and the Chrysler story one of humble beginnings in the best American tradition. Chrysler first fixed Buick Motors before becoming vice president of GM with an unheard of salary of $500,000 a year - in 1916!

Then he fixed two other companies Willys-Overland and the Maxwell Car Co. before starting Chrysler Motors. Chrysler's reputation was spotless and his business sense, whether with automobiles or in other matters such as easing the Chrysler Building during the Depression, is unassailable.

Award-winning author and syndicated columnist Daniel Alef tells the story of a genuinely humble man who made it to the top and never looked back.