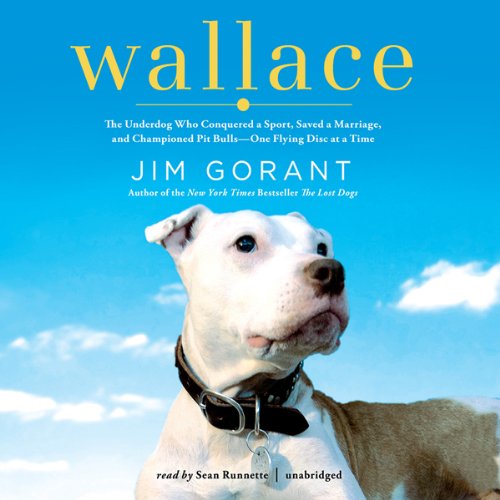 By: Jim Gorant
Narrated by: Sean Runnette
Try for $0.00

Today, Wallace is a champion; but in the summer of 2005, he was living in a shelter, a refugee from a suspicious pit bull-breeding operation. Then Andrew “Roo” Yori entered the picture. A scientist and shelter volunteer, Roo could immediately see that Wallace was something special. While on his honeymoon, Roo learned that Wallace was about to be put down. Roo and his wife franticly fought to keep Wallace alive until they could return home to adopt him - even though they already had two dogs.

Once Wallace made it home, Roo knew the dog needed a mission, and serendipity led them to the world of competitive dog Frisbee. It seemed like a terrible idea; large and heavy with thick muscles that can make them look less than graceful, pit bulls are everything that most Frisbee dogs aren’t. But that was fine with Roo - because part of his mission was to change people’s minds about pit bulls. Overcoming everything from injuries to prejudice against the breed, the unlikely pair persevered to become world champions.

About the author: Jim Gorant has worked as a magazine editor and writer for 20 years and is currently a senior editor at Sports Illustrated. His work has appeared in such magazines as Men’s Health, GQ, and Outside. He is also the author of The New York Times best seller The Lost Dogs. He lives in New Jersey.

“Having detailed the fate of Michael Vick's dogs in the heartrending and immaculately researched  New York Times bestselling  The Lost Dogs,  Sports Illustrated senior editor Gorant describes the life story of another pit bull - Wallace, a rescue dog who went on to win or place impressively in dozens of local, national, and international doggie disc-catching competitions. The aim, though, was to clear up misunderstandings about the breed while letting Wallace have some fun.” ( Library Journal)

What listeners say about Wallace

I Have Never Been so sad When a Book Ended.

What did you love best about Wallace?

I just really wanted to keep listening to story after story of Wallace and Roo's triumphs. I just didn't want this book to end!

Have you listened to any of Sean Runnette’s other performances before? How does this one compare?

No sorry I have not!

When to cheer for the underdog!

The Pit Bull was left at the animal rescue shelter by a man who had called ahead the day before, explaining that he had found a stray and would they take the dog. This man had trained the Pit Bull himself and had even given him a name, Ranger Chuck.

The rescue shelter became more than frustrated when it became apparent that the Pit Bull, whom they named, Wallace, was quite aggressive. Wallace eventually became what is known as, unadoptable. Unadoptable dogs, at times, can be faced with euthanizia.

The couple, Clara and Roo, short for Andrew, had adopted a dog from the rescue center and became volunteers at the shelter. They worked with Wallace tirelessly, in order to decrease his aggressiveness. Society has the misconception that Pit Bulls are always aggressive. What society doesn't realize is that Pit Bulls can be trained to be aggressive by its owner but are not born aggressive.

Eventually, Clara and Roo had to take Wallace home to be his foster parent's. While at home with Wallace, Roo found a Frisbee-like toy in his basement. Roo took Wallace outside and in an attempt to decrease some of Wallace's enery, he attempted to throw the disc like shaped toy across the yard. Wallace was a born player. Now, if Wallace could be taught how to not snap at other dogs, not chase after people wearing shoes and not have to always be crated to keep other's safe.

That was the day that began the rest of Wallace's life. Wallace didn't just have a foster home, he now had an everyday home with Clara and Roo. Roo taught himself how to do team disc playing with a friend, Josh, and of course, Wallace. Success would take time. However, Roo was determined to make the impossible, possible. The Pit Bull, Wallace, would have to be taught how to play with a disc with two people. Remember, no Pit Bull had ever been known to play, team disc. Roo had another thing to prove, that Pit Bulls were dogs that could be trusted and loved like any other dog in the country. He wanted to bring Pit Bulls back to places that had banned Pit Bulls from living. He and those who loved Wallace had a rough road ahead to make other's believe as he did.

The book was a great listen. The narrator, Sean Runnette, was excellent. He made a great listen even better. I found the book a learning experience. I had never known that dogs played with a Frisbee anywhere but in their backyard or at the beach. Disc tournaments are played in many places and many dog's are their owner's participate in the sport. Trophies are won, no money is involved. I love dogs and have had a beginning lesson in how to not fear a Pit Bull. I have never owned one or known anyone who has owned a Pitt Bull. I was aware that some owner's of Pitt Bulls raised them to participate in dog fights. These fights are what have brought such a bad name to the dog breed, Pitt Bulls.

I loved the story of Wallace, hearing the fight his people put in for him and the message of positive PET ownership

AWESOME Book for anyone

I have spread the word about this book to everyone. As a Pit Bull advocate, I was so excited to listen to a true story of a positive nature concerning Pit Bulls. I love the breed and fight hard every day for them. EVERYONE should read this wonderful and true story of a win for the breed.

it was just an awesome book throughout.

I would love to hear a story that would continue with the Yori's about Hector. I've met one of the other Vick dogs and the positive change in these dogs would be wonderful to listen to.

Roo and his dog

Did you know that in the early 1900's Pit Bulls were nicknamed Nanny Dogs in Britain. That the dog in Little Rascals was a Pit, picked because of his ability to get along with kids. It is terrible that we have turned this breed's reputation around through dog fighting.

If you like reading about competitions, then you will like this book. Matter of fact this book seems to be more about competitions then anything else. It also seemed to be more about Roo, the owner, then about the dog. Roo is a driven competitor who seemed to push the dog, when all the dog wanted to do was play. Roo was out to prove something and Roo has a large chip on his shoulder. The last half of the book is a list of all the tournaments they went to and how well they did. This was exciting at times and redundant at others.

I recommend this to dog lovers and sport lovers, but not to non dog people. If you have not read Marley and Me, by John Grogan, it is a must.

Wonderful story about a great man and his dog, which dispels myths about Pit Bulls. Demonstrates how irrational breed legislation is.

Wallace is a Champ!

Overall, I enjoyed this book; who wouldn't love Wallace?!?! A dog who eats a whole spatula in pursuit of some cheese melts my heart! Although there were some slow spots, I liked that it focused on breed discrimination. I also learned about flying disc competition for dogs, which is something I had not been exposed to before. I listened to the audio version and the narration was fine.

So sad to have reached the end. FANTASTIC life, story and so well read. Thank you!

Narrator can't sink his teeth in this story

What did you love best about Wallace?

Never give up on a underdog.

Would you be willing to try another one of Sean Runnette’s performances?

When Wallace went to his first disc competition

My main gripe about this book is that there was too much overview and not enough detail in the story. I was hoping for a little depth in how Wallace learned so quickly and so well. I wanted to know how his owner taught this underdog to become a great freesbie dog. Their is more in the story about Wallace's owner and about his owner's drive to win rather than about the dog. I just found that I grew bored of the story because of the lack of depth. Maybe there was just too much information to cover and the subject matter should have been narrowed down. I have recently rescued a pit bull who shows great intrest in freesbie but I failed to come away from this book with any real insight or inspiration. I gave this story 3 stars because I love dogs and the story was Okay.