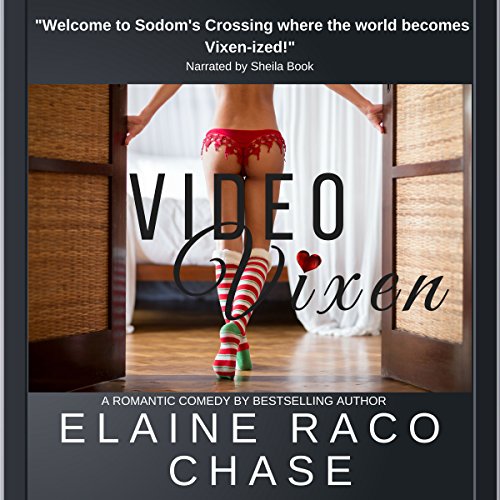 "Good girls finish last, Daniel, and I've always been at the head of the class." That's what Vixen Mallory would say, and Vikki Kirkland was saying it now - to Dan Falkner, ace reporter who'd come to do a story on the soap opera and the star that had taken the cable network and viewership by storm.

Welcome to Sodom's Crossing, just south of the equator - well actually downtown Manhattan! From her billboard in Times Square to her rare vertical photos in Playboy - the world was finding it easy to be Vixen-ized.

Vikki had sworn to her fellow castmates on Always Tomorrow that she would protect their secrets by being the sexy, unscrupulous siren on camera and off - to the hilt. Making sure that investigative reporter Dan Falkner would focus on the illusion rather than the sweet, shy woman Vikki really was.

There was just one problem - Vikki never imagined how easy it would be to enjoy being a vixen and take what she wanted. And she found she wanted Dan Falkner more than she had ever wanted any man.

What listeners say about Video Vixen

Where does Video Vixen rank among all the audiobooks you’ve listened to so far?

What other book might you compare Video Vixen to and why?

This romance is like others featuring fun characters and snappy banter, but it's got that television insider aspect that's so much fun.

Narrator has a husky voice just the way Vixen Mallory, the heroine of this romance, is described as sounding.

Yes, unfortunately I couldn't so I enjoyed getting back to it at the end of the work day.

For anyone who loves contemporary romance novels and the "insider" view of daytime television.

And then there was Vixen...

If you could sum up Video Vixen in three words, what would they be?

There are so many aspects to Vixen . . the contrast between the character and the actress is one of the main points. Of course as this ace reporter learns more and more about the lives surrounding the cast, it gives the reader a look through his eyes the difference between reality and PR. All in all it shows wonderful insight into the 'person' in a personality.

Have you listened to any of Sheila Book’s other performances before? How does this one compare?

This is my first encounter with Ms. Book, but I don't believe it will be the last.

When Daniel learns begins interviewing the cast and learns about their private lives.

I've read - and enjoyed more than one of Ms. Chase's novels, and I am so pleased at how well they transform into audio form. It breathes more life into already wonderfully believable characters, I enjoyed the book and the audio was just as enjoyable, I highly recommend it to anyone who wants to just listen to a GREAT story.

Fun and full of steam

I loved watching Dan try to figure out Vikki/Vixen. When Dan comes to do a story on show, her castmates are afraid of their secrets coming out, so they try to distract him with Vixen, since Vikki has no secrets. And Vikki enjoys her role. There is lots of fun banter between them, and plenty of steam.
Sheila Book has the perfect voice for this one. She is a great narrator, I just wish she would stop casting "aspirations" on people's character. She could also use a tiny pause sometimes when switching POV because it can get a bit confusing. Other than that, the narration is excellent.

I am an admitted fan of Elaine Raco Chase’s work – and it is entirely her doing that I am now addicted to audiobooks. That’s not a bad thing when you have the opportunity to review - and this recording has managed to climb to some of my all-time favorite titles that she has written.

Vicki/Vixen is an actress, and loves her life, the celebrity and the perks that come with her job as a soap opera star. Her life is an open book: while some may think her calculating I found her refreshing and surprisingly candid and matter of fact about her looks, her life and her desires.

When Dan is sent to write “the story” about the backstage world of the hit soap opera, and his determination to dig has many of the cast members running scared. Not Vicki, however: her lack of secrets and ability to keep men off balanced is the perfect solution to what could become a PR nightmare.

Since Vicki finds Dan particularly attractive, and her go-to offensive move is to seduce, the games begin. With a touch of Marilyn-esque va-voom mixed with the intelligence of a woman who can and will use every asset to her advantage, the sexual tension and interplay with the two characters is delightful and entertaining as the two realize the inevitable: they will be involved, and it will not be professional. Steamy and saucy, with dialogue to die for, this is a winner of a story.

Narration is provided by Sheila Book, with a voice that feels right for the story and does not distract overmuch with her tone or pitch changes for characters. While I would have appreciated some well-placed pauses before character change, this was not overly distracting as the characters are solidly created with distinct personalities that are evident in their words and enhanced with her delivery. At just over 4 hours this is a perfect afternoon’s escape listen.

Again, Elaine Raco Chase has delivered a story that is both entertaining and well-researched, with enough steam to actually explain those packages from inmates that were sent to her publisher. Yes – that is part of the introduction to the story, and made me laugh out loud in anticipation.

I received an AudioBook version from the author for purpose of honest review for the Heard Word. I was not compensated for this review: all conclusions are my own responsibility.

Great writing and I enjoy the narrators voice

My only issue with this book is it's length. It could have benefited greatly from being at least 50% longer and could definitely support longer with this writer's talent. I really enjoyed it and would have loved to have read more. I'm not saying it's a paragon of literature but I've seen plenty of supposed NY times best sellers that didn't come close to this even with it's limited length. One could only imagine what it could have been with more character (both main and supporting) development and a more intricate plot. I will be on the lookout to read more from this talented author.

The narration on this could be better, the story is probably better to read. 2 hrs in, and there are LOTS of places where the character changes are not noticeable, and you can't tell who's supposed to be talking. This is placed on a soap opera set, and there are several characters. There are at least 2 scene changes, so far, where I couldn't tell what happened & had to back up a couple of times . The narrators voice is fine, the delivery isn't.

The narrator simply reads the book. No inflections or voice change at all. The story didn’t catch my imagination whatsoever. It’s about soap opera vixen finding “love“? I didn’t connect in anyway with any of the characters. I have one hour and 20 minutes left of the book and I really really don’t care what happens so I am going to delete it. Sorry this book was not for me.