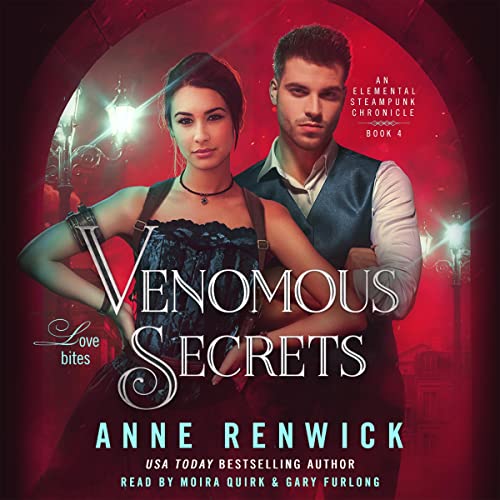 By: Anne Renwick
Narrated by: Moira Quick,Gary Furlong
Try for $0.00

Deadly secrets. A fanged monster. A device that could save lives or shatter worlds.

Cait McCullough, venom expert, is trouble personified. Bored with exploring the possibilities of her unique biology in a laboratory, she longs for excitement. And investigating a vicious fanged creature who stalks its victims by lamplight in darkest London offers the perfect opportunity. Working with a handsome, unmarried agent? A delightful bonus.

Jonathan “Jack” Tagert battles enemies shrouded in darkness. While chasing suspects was once second nature, impending blindness threatens his line of work. The timing couldn’t be worse. When a deadly attack upon a lord at his brother’s engagement ball connects to a string of odd murders, the hunt begins for a seductive predator.

Bound together by societal scandal, they must trace the creature’s past. Every clue spirals them deeper into peril as they struggle to separate fact from myth. As the venomous truth slithers near, the fight to survive draws Jack and Cait ever closer. With lives on the line, and time running out on Jack’s dimming vision, the pair must untangle a mystery to stop the body count from rising.

Elemental Steampunk Tales: A Trace of Copper, In Pursuit of Dragons, A Reflection of Shadows, A Snowflake at Midnight, A Ghost in Amber

What listeners say about Venomous Secrets

An excellent story, brilliantly told by the two narrators. Really keeps your attention with the good pace and dramatic action. A thrilling listen. Can’t wait for the next one!