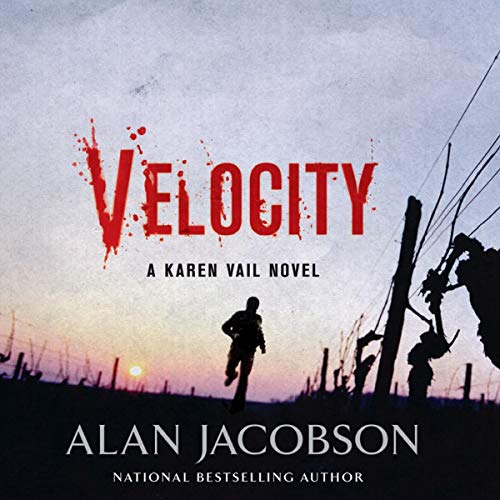 By: Alan Jacobson
Narrated by: Deanna Hurst
Try for $0.00

FBI profiler Karen Vail returns in Velocity, national best-selling author Alan Jacobson’s most explosive thriller to date. Vail’s boyfriend, Detective Robby Hernandez, has seemingly disappeared into the dense air of a Napa Valley evening. There are no clues to his whereabouts, other than a blood stain - and potential connections to a serial killer operating in the wine country.

Despite using all means at her disposal to find out what happened to Robby, Vail’s efforts are thwarted until her colleague, Detective Paul Bledsoe, hooks her up with Hector DeSantos, a covert Defense Department operative who has a knack for finding difficult to locate information. But DeSantos is an unwilling partner, and other than offering superficial cooperation to pay back the debt he owes Bledsoe, he is reluctant to work his valuable informants for what he views as Vail’s personal crusade to find her lover.

That is, until Vail pries loose long-buried secrets, lies, and deceptions on the part of her own task force members. It’s information that even DeSantos can’t ignore, a discovery of great magnitude that reveals larger forces at play - forces which propel Vail and DeSantos into a frantic search that takes them from the wineries of Napa Valley to the monuments of Washington, D.C., the wealthy beach enclaves of San Diego, and the bright excesses of Las Vegas.

What listeners say about Velocity

Karen has no respect

I really enjoyed the first two books but the way Karen disrespects her chain of command in this book goes too far. This may be my military background but, this book was hard to finish.

This Series is Awesome!

This series is better than Patterson n I've read them all. I can't wait to get to the next one in the series. Kept me guessing n at the seat of my pants-couldn't sleep till I finished it.