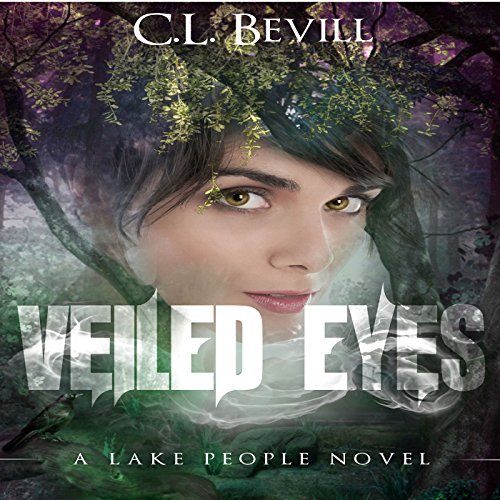 A vivid waking dream of giant cypress trees dripping with Spanish moss haunts Anna St. Thais. The trees sit on a black lake that resembles a dark Louisiana bayou with an evocative aura. The dream includes the presence of a man who seems to know Anna all too well and a group of people with strange telepathic powers, sometimes called veiled eyes. An orphan from Texas, she is on her way east to help out a friend when she encounters two terrifying things. Psychically, she begins to see and hear things through the eyes of an unknown individual, a man who knows more about her than she ever would have imagined. The second thing is that she has been kidnapped by a sociopathic trucker intent on making her his latest victim. When she is rescued by Gabriel Bergeron, a member of the elusive Lake People in Northwestern Louisiana, Anna doesn't realize that he is her psychic counterpart and she has been inexplicably pulled to the area. She shares their strange colored gold eyes and their distinctive mental powers. They are a reclusive lot and know that Anna is one of them, but has been isolated by unknown circumstances. She is drawn into their incomparable world, something between that of the Creoles and Cajuns, and much in addition to those. There Anna finds a romantic link with Gabriel and the spine-tingling fear of not knowing who to trust. Her return has disturbed the inner workings of the group and threatens to expose secrets long concealed in the murky Louisiana bayous. There are secrets to be divulged about her past and why she was spirited away as an infant. Anna isn't safe until she discovers the answers she so desperately requires.

What listeners say about Veiled Eyes

This is such a good story.

I have not looked yet, but I really hope there are more books about these characters. The author did an amazing job.

I don't know where this author has been but she's now one of my favorites. She is so unique. I love reading anything set in Louisiana. Anna is hitchhiking and gets a ride with a truck driver. Little does she know he is a serial killer. She goes through hell. But there's a voice in her head communicating with her. She feels drawn to him and has had dreams and visions all her life of a beautiful lake with black water. Her mysterious man rescues her. Being an orphan all her life with no family at all has been lonely and hard. Now she is staying with her rescuer and his friends and family who surround them in the town Unknown that has a huge lake and bayou. The people of this town all have an ability where they can communicate with each other. But there are a few who are keeping secrets. Some go missing and some are killed. Who is responsible? This was so suspenseful and mysterious. I couldn't guess even until the end. This is a review for both the ebook and audiobook as I have both and switched back and forth. The narrator is superb with a wonderful Louisiana accent. I felt like I was there with the community.

A brilliant story, unexpected and I devoured it quickly. Anna character was a beautifully written and the Narrator Melanie Crawley gave a good performance although her style was just a bit slow for my ears. I set the speed at 1.25 Overall 11 marvellous hours if escapism. Oh to have such powers 😉

I read and reread this book. Awesome story great performance. I love all the lake people books but this one is my favorite!

I was given this free review copy audio book at my request and have voluntarily left this review. I read the Lake People series by C.L. Bevill a few years ago, and LOVED them, just found out they were on audio!! Loved the characters and the story, it has a little of everything, romance, suspense, murder and leaves you wondering whats going to happen and who's doing what. Narrator Melanie Crawley does a wonderful job with the characters and story, you feel you are right there and part of it all. Highly recommend.

Before I start my review I would like to thank Anne & Melanie form The Book Club For Audible Listeners and of course C.L, Beville for giving me tho opportunity to listen to and review this book.

This book is very different from the usual type of fantasy fiction I listen to as it was about telepathic communication rather than the usual vampires, werewolves and fay.  The story was captivating and at times I was gripping the edge of my seat hoping Anna would be ok.
To start off I did find the narrators strong Southern American accent quite hard to listen to, and it took me right back to the Sookie Stackhouse series, even more so when some of the same places were mentioned in the story.  I set the book to play at a slightly faster speed and this made a world of difference.
Anna the main character of the story is not only a orphan but she also has the worst luck ever, nothing goes right for her, which is such a shame as she really is a nice girl. Down on her luck she hitch hikes and accepts a lift from a truck driver whom seems quite nice, unfortunately for Anna he is a serial killer, and this is where the story really kicks off and I was gripped, will she be saved or wont she, well she was, but it was very intense and was my favourite part of the story.

The story does not end there, poor Anna, she still has more trials ahead of her, will she find peace, her family, happiness and love, I am not going to spoil it for you !!! You will have to listen / read the book if you want to find out.

A good start to the series.

The Lake People are a clan of pseudo-Cajun/Creole living around a black lake in North Louisiana.
Anna was brought up in Texas, an orphan, but has been "dreaming" of the lake, and hearing a whistling man. She has always had a sense about people but it hasn't been working so well lately.
She decides to take a trip to see her friend and when things go very pear-shaped her abilities save her.
From the dramatic beginning the story was engaging and page-turning and I was keen to know what would happen next.
The lead characters were likeable, the psychic abilities were credible within the context of the story and although there are a couple of areas that were a bit out-there and too stretched overall the story was really good.
At first I found the narration a bit off-putting but as I got more into the book I found it fit the story and enjoyed it although there were some inconsistencies with the accents.
The production had a few errors and could have been more polished- repeated lines, etc.
I will be reading the next in the series.
Overall 4 stars
Performance 4 stars
Story 4 stars

Narration distracts but storyline is intriguing

The first book in the Lake People series by C.L. Bevill is an interesting premise. The main character is resolute in situations most would find completely terrifying and in quick succession.

The narrator is clearly talented however I think narrating the storyline (not character) in the thick accent was not a good choice. It distracts completely from the storyline and doesn't allow a proper depth into what is actually a very intriguing story. Especially when the narrator has moments where she loses the accent.

I have read a review if you speed up the narration it makes it better, this didnt work for me, however if the narrator is the only reason you don't give this a listen, it's worth a try as it is a pretty good starter to what I'm sure will be an excellent series.

Anna is a orphan never knowing who her parents are, but there's a voice in her head communicating with her. She feels drawn to this whistling man and she has visions of a beautiful lake with black water.

Whilst hitchhiking she gets a lift with a truck driver who turns out to be a serial killer. Her whistling man rescues her and takes her home to his family and community which set on the same lake which she has dreamed about for most of her life.

The lake people have the ability to communicate by thoughts alone, like all towns some of the people are good and some are bad, very bad

Anna searches for the truth in the salt mines and finds a hidden secret, worse then the serial killer............

At first I wasn't sure about the narrator of this book as she has such a strong deep south accent, but I got to the stage where I could still hear the book echo in my mind when I wasn't reading it, so I think it drew me back to the book for more.