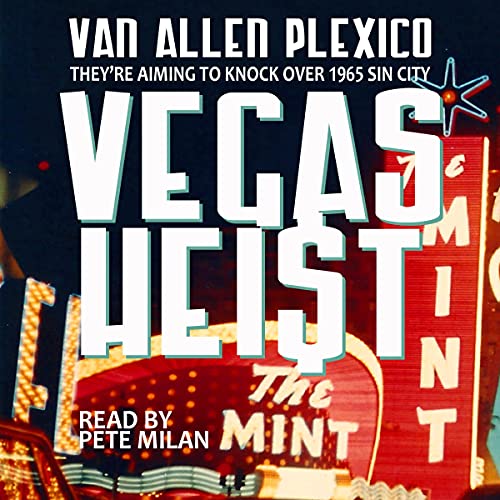 By: Van Allen Plexico
Narrated by: Pete Milan
Try for $0.00

It's the holiday season of 1965, and the fabulous Caesars Palace resort and casino is about to open in Las Vegas. And its vault is filled to bursting with cash.

John Harper and Saul "Salsa" Salzman roll into town with inside information: a secret way into the casino, leading right to the vault itself. Putting together a small but highly skilled team, they make their move, aiming for untold riches.

But jobs like this never go as planned. A beautiful widow, a jealous enforcer, and a murderous rival casino owner all want a piece of the pie. Before New Year's Day arrives, Harper and Salsa will be lucky to escape Sin City with their lives!

A brand-new heist tale from the award-winning author of Sentinels, the Legion trilogy, and Lucian.

“When planning a heist, it’s good to learn from the masters, and it’s clear that Van Allen Plexico has: from Richard Stark to Lionel White to Ocean’s Eleven, the fingerprints of the greats are all over this smart, snappy casino job.” (Charles Ardai, editor, Hard Case Crime)

"Impossible to put down. Filled with twist and turns that you don’t see coming until the very end. It is a terrific read and one we highly recommend." (Ron Fortier, Pulp Fiction Reviews)

What listeners say about Vegas Heist

Vegas Heist:- A great read set in the sixties, before modern tech no cctv no computers. Gripping and tense.
I loved this book.
A great gift for anyone who loves crime thrillers.
I was given a free copy of this audiobook at my own request, and voluntarily leave this review.

I love a good Vegas story, and I enjoyed this one as well! The narrator was very good! Best I have ever heard!!!

keep in mind this is my opinion and you may like this book. i can see why but this one is not for me. i love the concept and idea behind the book title but the story didn't draw me in and make me want to listen to the rest of the book. i believe that the performance was the reason i didn't like the book as much as i did. to me the person reading sounded like he was trying to sound like Rod Serling while he was in his role in The Twilight Zone. but bad. dont get me wrong i see what he was going for trying to sound like the time. plus for me the audio quality was not quite there. the best phrase i can use is "missed it by that much". and honestly for me that can go for the whole book

This is a fantastic read! A group of con-artist, each with their own special skills meet up in Vegas in break into Caesars Palace, which is getting ready to open New's Eve in 1965. One of the men, gets together with the widow of the man who dug underground tunnels into the Casino prior to him getting murdered and the widow spills all that she knows, which allows the group of men to come up with a solution of how to enter without being detected.

The narration was wonderfully done, which made everything just perfect

Loved this book and its narration so much! Van Allen Plexico sets up memorable characters along with a heist and Pete Milan brings it all to life. Enjoyed this very much!

Such a great story!

Very reminiscent of heist stories like Oceans 11 and The Italian Job. Van is a consummate pulp author, and this, his first published foray into the heist sub-genre puts him on the scene quite soundly. I can’t wait for a sequel!

I’m not usually into heist stories but I really enjoyed this. Moves quickly, couple nice twists, loved the ending.

The year is 1965 and the place is Las Vegas. I was there in 1968 with my best buddy having a grand experience, as only a minor with cash in his pocket can. It was indeed a memorable experience! This book is a great experience as well. It is a very snappy, well-written tale of several guys planning a casino heist. Not everyone survived, but it was a wild, fun ride. The characters are awesome; I especially liked Harper and Salsa. I highly recommend this as an entertaining change of pace. This audiobook was given by the author, narrator, or publisher at no cost in exchange for an unbiased review via Audiobook Boom.

This is a terrific yarn. Very much aligned to the works of the beloved and missed late Donald Westlake. Van Allen Plexixo has done a wonderful job emulating Westlake’s “Dortmunder” comic crime series. Whether or not pastiche was Plexico’s intention, the story starts fast and never loses its pacing or narrative. Not as funny as the Dortmunder novels, but if there are more in this series (and I sure hope these is) a fleck of comedy would really take this to the next level.

But, I can’t be as enthusiastic with the narration. I never heard Pete Milan before. It sounded as if he read the entire novel with a perpetual sneer. Such a disservice to the fine material.

PS .. Van is the head honcho of several great podcasts as part of his “White Rocket” entertainment group. One of them is a terrific James Bond podcast. It was fun to hear him Easter Egg some Bond material into the story!

Definite Stark/Westlake/Parker vibes from this one and that's no bad thing, because I loved the first round of those books when I read them maybe a dozen or so years ago. Maybe not quite as tight, tense and on point, but I get definite Parker vibes from our main character Harper. His partner here is Salzman, who sets up and sells the job to Harper - breaking into the vault of the soon to be opened Caesar's Palace casino in Vegas.

It's a busy book, planning, recruiting, getting the firepower needed and for Harper trying to keep everyone and everything in check when he knows some of his team are intent on running a double cross.

I liked the Vegas 60s vibe, I liked the near misses and run ins and incidents prior to the job. I enjoyed the sting in the tale which the reader knows is coming, but is another hazard to be dealt with by a surprised Harper. I cracked up at the close shave near the end when Salzman uses his smarts to escape the cops, all the while wondering if Harper has run out on him.

The more I think about it, the better I think it was. I'm a big fan of robbers, thieves, heisters and con men in my reading, so with a decent cast of characters, plenty of pace and action and a satisfying outcome, there's ticks in most of the boxes for me.

Author Van Allen Plexico has written a second Harper & Salsa book, Miami Heist which I will keep an eye out for.

Really enjoyed this book, and I've never really listened to many crime books before. Reminds me a lot of Oceans Eleven but set in the 60s. Highly recommend