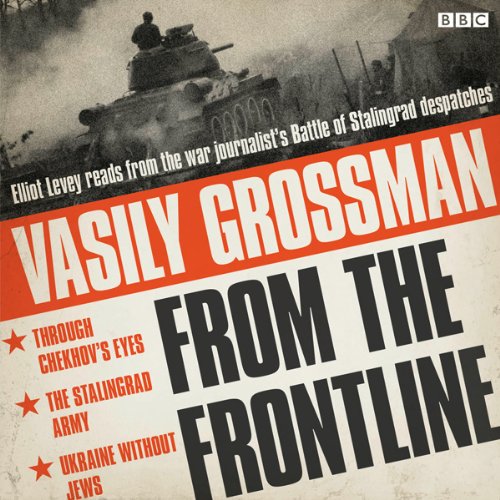 Vasily Grossman from the Front Line

By: Vasily Grossman
Narrated by: Elliot Levey
Try for $0.00

Vasily Grossman, author of Life and Fate, was transformed by his experiences as a war correspondent. Following the shock invasion of the Soviet Union in June 1941, Grossman volunteered for front line duty. Declared unfit for active service he was assigned to Red Star newspaper as a special correspondent. In these BBC Radio programmes, Elliot Levey reads three of Vasily Grossman's front line despatches. The first is a heroic and intimate portrait of a sniper, the second deals with the battle for Stalingrad and the final one details the murder of millions of Jews on Soviet soil: an account that was rejected by the military censor and only rediscovered in the late 1990s.

What listeners say about Vasily Grossman from the Front Line

Grossman did as much as could be done within the constraints of wartime propaganda. But the narrator sometimes speaks too quickly to be understood and the music is jarringly too loud, requiring frequent volume adjustments.

Vasily Grossman for a Larger Audience

I thought the selections were well chosen and listened to them over and over again. I looked in vain all over the internet for transcriptions of the letters. Though I own Writer at War, only small parts of these news articles are in Grossman's notes.

From the Front Line to the Soul

I'm left in a chilled, silent awe at Grossman's descriptions. This is a phenomenal achievement. Please, do yourself a favor, listen to this audiobook and investigate the whole of Vasily Grossman's output. It will transform you.

Excellent story telling! He makes you feel like you are right there. I would recommend this to anyone who likes to read about the Eastern Front.

Important Text, Well Read, and Impossible to Comfortably Listen to with Headphones/Earbuds

This is a review of the Recording Engineering and/or Direction. This is not a review of the text or performance. The musical interludes are too loud, compared to the reader’s voice. (And there are too many of them.) Grossman is a favorite of mine, and Levey's reading is masterful. Unfortunately, however, the volume of the musical interludes is painful, when listened to on headphones and/or earbuds.

It is clear that a calm, honest and humane hand has written these pages. He is a man who loves and serves his country, but does not flinch from describing events the State may feel reflect badly on it.

grossman is the master of world war two storytelling, effortlessly fusing poetry and reality with each tale. Bringing to life the horrific journey with the red army on the eastern front.