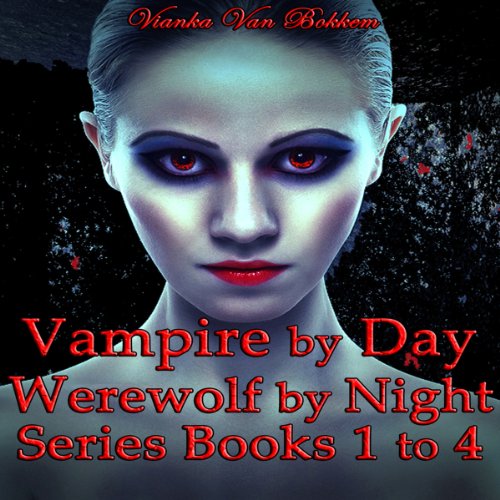 Vampire by Day, Werewolf by Night Series: Books 1 to 4

Vampire by Day, Werewolf by Night Series: Books 1 to 4

By: Vianka Van Bokkem
Narrated by: Brie Carter
Free with a 30-day trial

Elina Jensen was cursed to walk as a vampire by day and as a werewolf by night, when she was in her mother's womb. Elina had to deal not only with her double curse, but with her attraction for Arian, the 19-year-old human boy; Kitchi, the strong Native American werewolf; and Tristan, the handsome Romanian vampire.

Two years have passed since one of my curses was broken by Kitchi, the strong, attractive werewolf. Tristan, the wise and gorgeous vampire and I were very happy living in Sirdal. One winter night Silver Fox paid us a visit to tell us about the arrival of a merciless vampire hunter named Grigore Enescu. Ironically his name means "watchful; vigilant". Grigore changed my happy life forever. My double curse returned the moment Kitchi's daughter, Kai, was born. During a vision I learned why the curse was back. Nahuel the Moon clan's chief wanted our land and war was declared. Hired vampires were soon helping him. Will Nahuel win the war and destroy my clan? Or are we going to find allies of our own?

Norway and the rest of the world are in chaos. My clan and Nahuel's are constantly fighting. Vampires and werewolves are turning humans in alarming numbers. Gavril and Crina the masters of the elite vampire coven Celebrus (Latin for rich and respected) were genetic engineering three perfect vampire rulers. Gavril and Crina spent 400 years working their vampire genes via in vitro fertilization. After they were finally successful a surrogate human mother was chosen. The surrogate was a young healthy Romanian woman named Cecilia.

The triplets names are Aries, Aella, and Alair. They call themselves "Judges of Chaos". To keep order in the world the triplets kill those who display hostility. The rest of us are being forced to work as their slaves. The perfectly engineered vampire triplets ignore their origin. Will the secrets inside the brown box reveal where the surrogate is? Is there hope for us to end slavery?

The infamous Celebrus Coven is cloning humans with blood AB-, B- and O-. Those types of blood are rare, which makes them a delicacy. The richest vampires in the world were in line for such a treat and didn't mind paying large amounts of money for it. Our regular heroes Elina, Grigore, Kitchi, Kai, and Silver Fox embarked in the same journey to free the human clones. Aella discovered that she had the ability to control, generate, and absorb electric fields. Alair also discovered that he had the ability to astral project anywhere. They ignore the power that Aries has and were hoping they could defeat him and the Celebrus Coven. An unexpected arrival will change Elina and Grigore's life forever!

What listeners say about Vampire by Day, Werewolf by Night Series: Books 1 to 4

What would have made Vampire by Day, Werewolf by Night Series: Books 1 to 4 better?

Better narration, vary vocalizations. slower speech. hard to follow storyline Else--might be good story,, if I could follow the plot line. Accents not the problem..

Spoke too fast to follow story, monotone did not emphasize important scenes. Made for a boring, disjointed story.

As I said, the basic story might be good, but I have no desire to listen again. Might follow the author, but will avoid the narrators assiduously