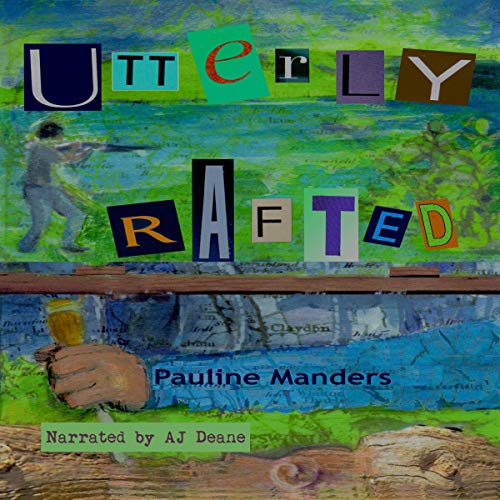 By: Pauline Manders
Narrated by: AJ Deane
Try for $0.00

It begins with two deaths. The body of a young woman is found, so peaceful she could be sleeping. The other, a ferocious murder beyond the railway lines at Stowmarket. Soon, three apprentice carpenters are catapulted into the dangerous world of illegal hare coursing and drug abuse in the south Suffolk countryside.

DI Clive Merry investigates as the characters find themselves embroiled in a dark and dangerous underworld, stretching from Wattisham to Hadleigh, Sudbury to Bury St. Edmunds, and beyond the Orwell Bridge. All this is played out against a backdrop of manuscript restoration, totem pole carving, and preparation for the annual raft race at Needham Market.

Pauline Manders has drawn on her love of the British Suffolk countryside to create a fresh, fast-paced, witty crime novel. Her quirky, fallible main characters, previously encountered in Utterly Explosive and Utterly Fuelled, lead the listener through a pause-resister of a finale.

What listeners say about Utterly Rafted

This is the third volume in Pauline Manders' Utterly Crime Series, though audiobook listeners may have also enjoyed number six, Utterly Crushed. I welcomed this return to the Suffolk world of Chrissie, Nick and Matt, who are again at the core of an 'adventure-with-corpses', the body count this time rising to two. These books always deliver on character and relationship, with careful plotting and believable situations - the sort of sticky muddles that you can almost imagine yourself wandering into. No-one has to save the world or resist gruesome torture, but tension arises, surprisingly, from the variety of scrapes that jobbing carpenters can stumble across. Utterly Rafted takes its title from the annual raft race that our heroes get involved with (though cockney slang might have substituted Shafted), when they tangle with hare-coursers and drug lords. Matt, an amiable fool possessed of a stellar memory and handy computer skills, has a shady brother who bullies him into looking after a dog of dubious ownership. Things go downhill fast for Matt, and although he doesn't ask his friends for help, they end up saving the day, albeit largely unwittingly. Characters we know from previous books make welcome returns - Ron Clegg the steady old joiner, Clive the high-ranking policeman and Nick's girlfriend Cat - and if you have read or listened to any of this series, you will enjoy the re-acquaintance. The Suffolk countryside, with its landmark towns and features, is prominent in the story, and I'm sure many consume Pauline M's stories for this well-rendered setting. I look forward to hearing the accomplished and expressive Andy Deane lead me through another fascinating Utterly tale soon.