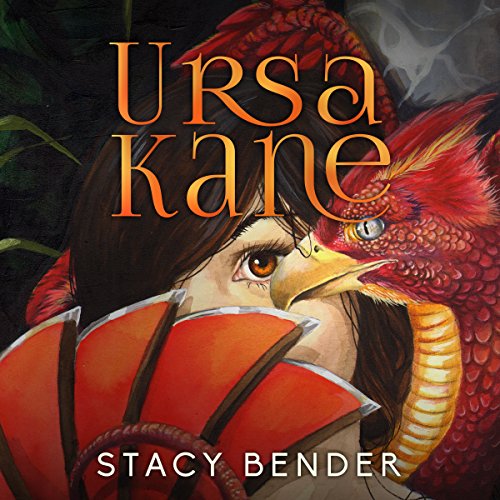 By: Stacy Bender
Narrated by: Nadia Mori
Try for $0.00

On her way to a martial arts convention, Danielle Kane's plane crashes on an island in the Bermuda Triangle with cities trapped in time. She is furious to learn that on this island teetering on the brink of civil war, women are chattel. The 16th-century Spaniards want to lock her in a tower. The 14th- century pirates want to enslave her. The Inca Indians would worship her as a god. The World War II soldiers aren't sure what to make of her. None of them are ready for a modern woman.

What listeners say about Ursa Kane

Really liked the premise but found it lacking

This is the first book I’ve read/listened to by this author. I felt I missed a lot and questioned if I should listen to this book again. Now, having read some other reviews where they also comment on characters or tangents fizzling out or being resolved in the background, I’m thinking it was not me. I did like the story and the concepts and the characters, yet I had a hard time getting into the book or feeling for the characters. I found myself often wondering what was going on and how we got to this point. I constantly felt I missed something.

This is the first book I’ve listened to by this narrator ( Nadia Mori ) and I would listen to another. I disagree with summer viewers and do not feel that the narrator had to have an American English accent. I do think however, a word should be pronounced correctly based on context (even if there is a slight accent variation). There were often mispronounced words in this book.
I think her character voices were well done and I enjoyed her style.
The quality of the audio was good.

I really, really enjoyed the premise of this story. I like stories with butt-kicking heroines who are also justice warriors, who attract followers and gain respect through their natural leadership abilities. I liked this heroine's wit and conscience. Two thumbs up for that. The reason why I didn't give a higher rating for the story is because there was so much of this story that the author didn't tell. For example - the main plotline is resolved in the background, almost like an afterthought. There are two main male characters that are built up in the first part of the book to be significant to the story, but they're resolved in the background like an afterthought during the second half of the book (they become less-than-minor characters). We also have some minor female characters from the first half of the book that disappeared entirely from the second half of the story. And, the scary creature on the front cover art, that everyone is petrified of? Well, it gets a LOT of air time in the story, but it doesn't actually do much scary stuff at all. It's all bark and practically no bite - I think there was a serious missed opportunity here. Resolve the plot line with the big baddie and demonstrate exactly why Munchkin is so feared and revered by everyone. Or let's have a grim but satisfying reunion with her original host family or her fellow abductee. So I saw so much potential in the story, but the lower rating is mainly because of missed opportunities.

I call shenanigans on the reviewers who gave a perfect 5 stars for narration. The main character of the story is an American female (from Michigan, as I recall). Other reviewers have observed, as I did, that sometimes the most basic words were mispronounced. Live and live, for example. In order to pronounce it correctly, you need to know the context ("I ate a live goldfish" versus "live each day is if it's your last"). This is not the kind of pronunciation mistake that an American female would make. It if happened once, okay, no big deal. But it happened again and again and again (and again). Just, no. Either the narrator should be better at this, or the narrator should not be narrating English-language audiobooks, or there should be more oversight and review because it should have been easy to detect and fix these kinds of mistakes. No excuses, this is a professionally produced audiobook.

Maybe it's a Canadian thing, but many of my female students (I'm an educator) are notorious for uptalking at the end of their sentences during class presentations - every sentence sounds like a question. This narrator skewed in the opposite direction and flattened the ends of her sentences, making them sound almost robotic or mechanical. I don't know the narrator's linguistic background, but this isn't an authentic tonal pattern to sound like an American-raised woman. Spanish? Japanese? I really don't know, but it disrupted the authenticity of the narration. It made me wish that the author had just created the heroine to be a recent immigrant to America instead of a character that grew up in Michigan. I think that for some listeners, the narration was just fine. But for listeners like me, who enjoy a complete audiobook experience where the story and the narrator create synergy together, and who deeply appreciate good, authentic narration? You will be the ones who likely give lower than 5 stars for this audiobook narration. The thing is, I'm almost positive that this narrator would do a great job with a different kind of story - a story with an English-speaking heroine whose first language is not English. On that other type of project, I could definitely imagine myself giving her a much higher rating.

I was given this free review copy audiobook at my request, and have voluntarily left this review. Her life may not have been perfect, but it was better than after she woke up on an island in the Bermuda Triangle. Danielle Kane, a martial arts expert, plane crashed on her way to a convention. Only she survived to wake up in a world without technology or women's rights, and a civil war is about to happen. Danielle struggles to deal with her new world, but she does and very well. Interesting characters, suspense and lots of action will keep you listen until the very end. The perfect listen for a road trip.

A fun, Lost style adventure, except its good

Ursa Kane is a very fun book, and I feel like this audiobook is absolutely perfect. Somehow, it feels like the book was written to be read by the narrator, Madia Mori. It's a little bit like Lost, in that it takes place in a parallel dimension, but it actually has a story, unlike Lost, so that makes this book good.

I loved everything about this book, from the main character who just doesn't care about fitting into society's expectations, to Munchkin, the adorable dragon / Quetzalcoatl. The world this story takes place in is really fascinating, and when the book ended, I was a bit disappointed in knowing that there was nothing else to read/listen to from this universe.

Highly recommended for people who prefer female protagonists, adventures, war stories, or historical fiction (this world feels like it is a slightly alien version of the 1700s or 1800s.)

Entertaining store, but could use better narration

I thought this was an entertaining book, though probably not one I would read again. I enjoyed seeing a strong female lead character, and I was touched (and affected, though I won't give spoilers) by her relationship with Morgan. What made me give a three-star rating instead of a four-star rating was the narration. I found a lot of the mispronunciations of certain words or forms of words distracting. For instance, the word "bow" was used in the books as in "to bend from one's waist," but the narrator pronounced it as in "to tie a bow." There were several instances like that that I took away from my enjoyment of the book. But overall, it is an entertaining story.

Take a large foundation of 'A Conneticut Yankee in King Aurther's Court' add in liberal dashes of 'Lost' 'Kung-Fu' 'Zorro' and 'Joan of Arc' bake in the heat of the United States of America Revolutionary War and this pretty much sums up the book. The author does a masterful job of weaving these elements together, and it makes a somewhat unique story.

The narrator is very skilled. Her accent also adds an element of authenticity to the Spanish-style backdrop of the novel. Unfortunately she seems to mispronounce several words, especially those related to the Martial Arts terms and Oriental words. Conversely, her portrayal of the emotional states of the various character, especially the sidekick can be immersive and redeeming.

The story has many opposites drawn together. There is Triumph and Tragedy, Hope and Despair, Violence and Comradery. The ending wraps things up, and yet still leaves things for the audience to wonder about.

I wasn’t too sure about this book in the beginning, but I am glad that I carried on with it.

Danielle’s plane crashes in the Bermuda triangle and she finds herself stuck on an island where time seems to have stood still and women are still second class citizens seen as the property of their husbands or fathers. She soon finds that there are different groups, and that the islands are on the verge of civil war. In her journey across the islands Danielle changes the lives and opinions of nearly everyone she meets.

I enjoyed the book, and was sad that it ended at the point that it did, as I would have liked to have seen more of her life.