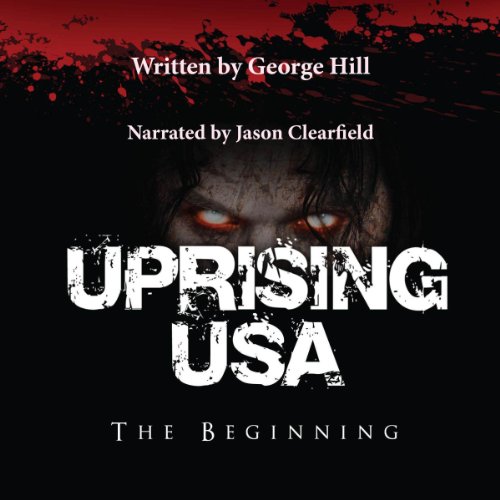 After a Chinese biological attack leaves 90 percent of the United States infected by the zombie virus, George Hill, AKA, the Mad Ogre, springs to the defense of his country with every manner of firepower known to mankind. George and his allies beat back the zombie hordes, killing hundreds of thousands of the undead beasts in an attempt to save America from extinction.

Not bad...Lacked that deep feeling of the underdog that prevails or deep suspense but made up for it with humor.

If you love guns, knives, military equipment and killing zombies this book is great! I enjoyed how the author was specific on weapons. I was constantly looking them up and I ordered a few!

Great story telling from normal folks that think in the what if state of mind keep up the great books and the good work and stay away from the gun dudes lol!!!

This is a great zombie book. Screw just surviving the zombie uprising. Conquer it. No fake firearm manipulation by an author that doesn't know which end the bullet comes out of. This book is fantastic.

Hard time listening at the start.

Would you listen to another book narrated by Jason Clearfield?

I hate to be a critic but probably not...

I had a hard time at the beginning but I believe it was the narrator. I tried listening three times before i finally got over the narrator. It is a good book. I found the narrator didn't know the proper weapon and military lingo. Mispronouncing many words also added to my frustration. However i did enjoy the story...

It was awesome, even if the narrator isn't a gun/knife guy and isn't sure how to pronounce ka-bar or hornady. An awesome story though and it kept me involved for 13 hours straight, that's hard to do with my "gun dudes" like attention span. But I digress, this follows the Ogre from the day it happens until he thoroughly turns the tides against the zombie hordes and is elected president. Its not the normal zombie horror story but its action packed and fun to listen to.

I'm a bit of a gun/knife whore so this got me all worked up, and reminded me that I still need a Becker Necker knife.

People flock to him for advice, he suggest things and they just happen. Set up defenses here, here and here...ok now we have a free zone base of operations and even though nearly every city, town, military base has been over run this is safe for the rest of the book. Make the classic run into a big city and save some helpless family members. While there pick up some guns and military vehicles. Meet up with other gun nuts from an online forum. Be made unwilling leader of the region and have military put under command. Bring in funny medieval guy. Rescue hot chicks who magically are tactical savants and sassy sexpots that want you. Grudgingly allow them to be your security detail. Go off on pointless missions alone with said sexpots. Stop nefarious international and government plots with little or no planning or intelligence. Introduce supernatural element as it is clear no normal person or agency is a match for this god among men.

The narrator was OK. The gaps between chapters were long enough that it had me thinking the app had locked up.

Some people will rant about his pronunciation of certain military or weapons based words or phrases but I am convinced that it was done on purpose. I would bet that anyone who gets that upset about such things will get put on a watch list and get a visit from the evil black helicopters

Would you listen to Uprising USA again? Why?

Sure. It was fun to listen to with lots of humor.

What other book might you compare Uprising USA to and why?

This is the First Zombie book I've read. I guess I could say the Walking Dead Comics but not so dark.

Did Jason Clearfield do a good job differentiating all the characters? How?

Not really. Some times it seems like he forgot which character he was doing.

I found many moments to be very funny and found my self laughing out loud more than once.

Jason Clearfield should have double checked how to pronounce various gun related words. His narrating errors were distracting a bit, but Mr. Hills fun story over shadowed the narration issues.This is a zombie story that was funny, down to earth and not dark & depressing like the Walking Dead. The was a story of hope through out the book that you don't see in the Walking Dead.

Guns, guts and a fair amount of zombie gore;)

Would you consider the audio edition of Uprising USA to be better than the print version?

Audiobooks as a whole make it easier for me to read books, I don't have the time or opportunity anymore to sit and read, so having the chance while I'm working to enjoy a book often means the difference between me reading a certain book and wanting to read it.

I enjoyed the characters, and the accuracy of the descriptions of the firearms and tactics. That I believe is the strong suit with the author, accuracy for once in a book regarding firearms.

Which character – as performed by Jason Clearfield – was your favorite?

No real favorite, honestly I'll say I wasn't thrilled with the accents of the reader, however it didn't detract from the book itself. That said I've heard the author speak on the radio so I also am familiar with his voice enough to know it's not really a southern accent as it's portrayed in the audio version.

Honestly can't put my finger on a certain point that was more moving, the entire book I thought was good, I guess laying that down honestly I enjoyed the start where your being introduced to the characters and situation. I think the creepy part of a zombie book is often when you know nothing;)

Overall I'm not a zombie reader, I don't go out of my way to read this type of book. However I am a fan of several authors like Larry Correia and his MHI series, I enjoy the accuracy in which he writes about firearms as well. So this to me is in the same vein, if you enjoy books by Steven Hunter, Larry Correia, and authors like them(as far as firearms), I would certainly give this a read, it was a fun ride from beginning to end.