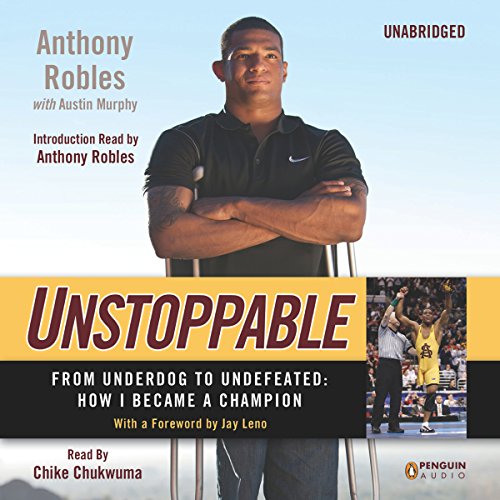 By: Anthony Robles,Austin Murphy
Narrated by: Chike Chukwuma
Try for $0.00

Anthony Robles is a three-time all-American wrestler, the 2011 NCAA National Wrestling Champion, and a Nike-sponsored athlete. He was also born without his right leg. Doctors could not explain to his mother, Judy, what led to the birth defect, but at the age of five, the one-legged toddler scaled a fifty-foot pole unassisted. From that moment on, Judy knew without a doubt that her son would be unstoppable.

When Anthony first began wrestling in high school, he was the smallest kid on the team and finished the year in last place. Yet Anthony's family and coaches supported his decision to continue, and he completed his junior and senior years with a 96 - 0 record to become a two-time Arizona State champion.

In college, Anthony had to prove all over again that he could excel. Despite hardships on and off the mat—including the temptation to quit school and get a job to help his family when they lost their home to foreclosure - Anthony focused his determination and became a champion once again.

Since winning the national championship in March 2011, Anthony has become a nationally recognized role model to kids and adults alike. But Unstoppable is not just an exciting sports memoir or an inspirational tale of living with a disability. It is also the story of one man whose spirit and unyielding resolve remind us all that we have the power to conquer adversity - in whatever form.

"Unstoppable is an inspirational narrative that captures the essence of conquering fears, breaking down barriers, and never letting one’s dreams be shattered. This is truly the American spirit.” (Condoleezza Rice)

"Unstoppable is a really touching and absorbing account of Anthony's journey. I've really enjoyed the way he's taken me there to share it with him. This is a great book!" (Serena Williams)

“is filled with passion, empowerment, hope, and encouragement. Anyone who reads this book will walk away with a sense of self-motivation to go out and accomplish their dreams.” (LaDainian Tomlinson, former NFL running back and Most Valuable Player)

What listeners say about Unstoppable

Great Audible! Reader was good and story is amazing. A must read for wrestlers but inspiring for everyone:)