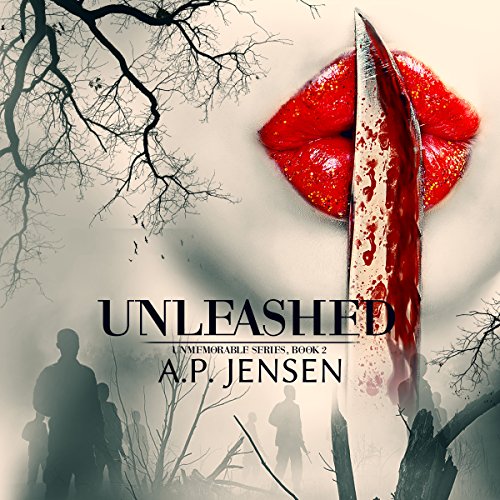 Raven learns that she's an Unmemorable, a race that no one can remember. She isn't ready to step into a world with secret societies and wars so she returns to her job as a housekeeper despite Cain and the Unmemorables protests. When a confrontation with the Battalion ends in blood, she realizes there's no going back to what her life used to be. While she tries to find a way to reverse the Unmemorables curse, she falls deeper into her relationship with Cain and a world where nothing is as it seems.

What listeners say about Unleashed

Awesome Story ~ Full of all Kinds of Twists!

Book one in the Unmemorable series was great, but I LOVED book two! It was captivating and pulled me in, and kept me engaged from the beginning to the end. It left me wanting more. If book three was out, I would have already downloaded it. Unfortunately, I will have to wait and hope book three will be out soon.

I agree with another reviewers comments about comparing Unmemorable to the X-Men. The characters have their own special powers but look like normal humans. Raven, the first female Unmemorable, is reunited with her family of Unmemorables, and anyone who comes across them, will not remember them. This power makes them basically invisible, and they can get away with almost anything as no one will remember them. However, being an Unmemorable is an lonely existence, and they only have each other.

There's a war brewing and the Unmemorables have tried to stay out of it, but are dragged into middle, when one of their own is kidnapped and now they must choose a side.

This story is told from Raven's POV; however, it would be great to hear from the other main character's POV's especially Cain's. I would have loved to of heard what Cain was thinking when the bracelet of Raven's hair was taken from him and he could not remember her but know something was missing.

I really enjoyed this story; it was so worth the time I invested in listening to it. I was able to get a lot done this past weekend. :-) I will definitely be on the lookout for book three.

I was provided a copy of Unleashed for an unbiased review. Thank you A.P. Jensen, it was an awesome story!

The narration was choppy and mostly alternated between flat tones and small injections of intensity.
The story is creative and i like the author's unique ideas but the writing is rough, it reminds me of a draft version pre-editing.

Beware, author leaves this one as a cliff hanger with MAJOR storylines hanging but over 4 years later has not released book 3. If you can't go into it knowing that you will not get closure, don't start it. Readers of series put trust in the authors when they start a series... trust that the author will fulfill the promise of the story archbut A.P. Jensen doesn't do that for her readers. These were released in 2014. In 2016, 2017 and 2018 dhe posted on her website saying #3 was coming and then that she didn't know when. I'm guessing life got in the way, it happens. Just warning others... it's a dead end with nothing resolved.

Would you consider the audio edition of Unleashed to be better than the print version?

Personally, I would have preferred to have read a print copy of this book. Roni Gallimore does excellent character voices, however the voice she has chosen for the main narration doesn't quite do it for me

What other book might you compare Unleashed to and why?

I would compare this book to something similar to the X-men series, the characters all have their own special powers (which I find fascinating) and are in the middle of a battle between different factions.

Would you listen to another book narrated by Roni Gallimore?

Probably not, unless it's to finish this series

To her immense credit, Roni Gallimore did impress me - there is an autistic character in this book and my heart absolutely dropped when I realised that his character would have to be voiced - there's so much room to either ignore it or exploit it horribly. She was incredibly sensitive and I think got the inflection perfectly - she has my respect for that!

I was really enjoying this series. The story was fascinating and I was expecting it to at least have a 3rd book even if it wasn't completed on Audible. But I found no 3rd book anywhere....Please continue this series.

Great series so far! (But incomplete)

This is a really amazing book and the author does a good job of world building. Raven can be a little annoying and pulls a few too-stupid-to-live moves, but she learns her lesson.
Narration could be better, it's a bit slow and is mostly monotone except for when characters are talking.
Overall, it's a great series, I'm sad the next installment still isn't out yet, but I have no regrets about drinking up the first two books. Whenever the author publishes the next one, I'll be ready and waiting.

the story is pretty good . it's part 2. I think I like part one better. but the narrator is in slow motion and makes it horrible. I had the idea to speed it up to 1.25- low and behold it sounds like a normal story again. I actually started enjoying the story much more.

I absolutely loved this book. I couldn't put it down, finished it in one day. I can't wait for the next one! this world that she has imagined and created is fabulous! the characters are fantastic and the narration is top notch! I would totally recommend this book to anyone who likes paranormal!

I read a lot, and it's not that often that a book has a totally original idea. The world that this author has created, with the whole concept of the unmemorables is exactly that! I liked this book even more than the first of the series. I like Raven as a character, and she went through a lot of character growth in this book. We got to know the other unmemorables a lot more in this one as well. I absolutely loved two of the new characters who were introduced! Maggie, who is Cain's sweet and full of life little sister was a fun addition. Sunshine is an autistic young boy that happens to be an unmemorable too. I love that the author included an autistic character! The plot of this book was exciting, and full of action. The only thing I didn't love about this book is Cain. He was starting to grow on me at the end of the first book, but I hate him in this one. He comes across as super contolling, but in an abusive way. I can't decide if he is supposed to seem abusive or not. I'm curious to see how his character is in the next book, especially with the events that took place at the end. Roni Gallimore is the narrator of the audiobook. She does a nice job with all the voices, and makes it easy to follow who is speaking. I really enjoyed this audiobook, and I'm very impressed with this author! I recommend if you like paranormal romance, but start with the first book. I personally can't wait to listen to the next installment!
**I was provided with this audiobook in exchange for an honest review.