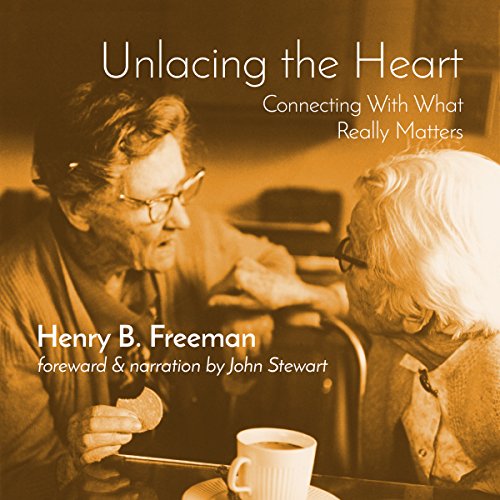 By: Henry B. Freeman PhD
Narrated by: John Stewart

Unlacing the Heart is a book of true-life stories that capture moments of deep personal connection between people living very different lives. Of Alfredo, a homeless man who invited Henry Freeman into his life; of Jane, a Yale student who needed help coming out from under the pressure and expectations of a high society family; of Sister Margaret, a Franciscan nun who joyfully shared her gift for uncovering the good in people we often fear and hate; of Mary, a person trapped in the body of a bag lady with only one true friend; and of an elderly woman also named Margaret who found in a meal of Omaha steak and asparagus a safe space to share her joys, her fears and the news of her pending death.

Henry Freeman shares with us a rare gift that extends far beyond his professional expertise. It is a gift he, a Quaker, received from his mentor and friend Henri Nouwen, an author and Catholic theologian whose writings on spirituality and the human condition touch the lives of hundreds of thousands of people around the world.

In his Foreword to Unlacing the Heart, noted author John Stewart reminds us that for thousands of years Jewish scholars have lifted up the books of Job, Proverbs, and Ecclesiastes as wisdom literature because they contain important reflections on the human condition and clarify how we as human beings are to live in the world. He then goes on to embrace Unlacing the Heart as a modern-day example of wisdom literature.