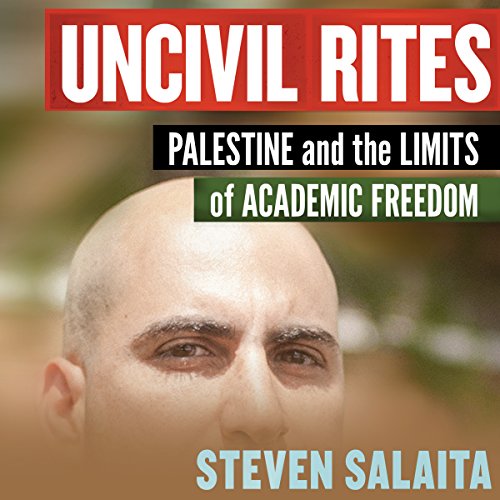 By: Steven Salaita
Narrated by: Tristan Morris
Try for $0.00

In the summer of 2014, renowned American Indian studies professor Steven Salaita had his appointment to a tenured professorship revoked by the board of trustees of the University of Illinois at Urbana-Champaign. Salaita's employment was terminated in response to his public tweets criticizing the Israeli government's summer assault on Gaza.

Salaita's firing generated a huge public outcry, with thousands petitioning for his reinstatement, and more than 5,000 scholars pledging to boycott UIUC. His case raises important questions about academic freedom, free speech on campus, and the movement for justice in Palestine.

In this book, Salaita combines personal reflection and political critique to shed new light on his controversial termination. He situates his case at the intersection of important issues that affect both higher education and social justice activism.

What listeners say about Uncivil Rites

In Defense of Dissent

Hallelujah! An academic who knows how to write for a lay audience. No matter what your stand on the Palestine-Israeli conflict, Steven Salaita has thoughtful, often funny things to say about free speech and dissent in academia and the press.

As a professor of American Indian Studies Salaita was notoriously fired form his post at University of Illinois over tweets that criticized the Israeli government. He went on to start lecturing with his talk "Silencing Dissent."

In this audiobook, he defends his statements and analyses what it means to be an academic in the age of 140 character thought bubbles. The tweets he's defending can easily be read as insensitive, and ill-chosen, and when he starts in with the semantics between anti-Semitism, and "antisemitism"— I'm surprised he couldn't see the confusion coming. But as he effectively argues, even taken out of context, criticism of a government's policies is not grounds for censorship.

Tristan Morris as a narrator can miss some of the humor that Salaita wrote, but is persuasive when reading about injustice and humanity in both communities.