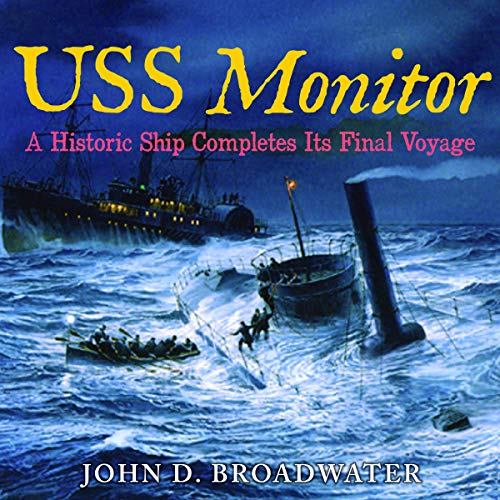 By: John D. Broadwater
Narrated by: Doug McDonald
Try for $0.00

A hundred and fifty years ago, naval warfare entered a new phase with the introduction of ironclad vessels. On March 9, 1862, the USS Monitor, prototype of this new class of warships, fought the Confederate ironclad CSS Virginia at Hampton Roads, Virginia, after the Virginia had ravaged the Union fleet blockading the James River, sinking larger, seemingly more powerful wooden warships in a potent demonstration of the power of an armored, heavily-gunned, steam-powered warship.

In the world’s first clash between iron-armored warships, Monitor and Virginia exchanged gunfire at close range for nearly four hours. Neither inflicted serious damage on the other. While a technical stalemate, the events at Hampton Roads changed naval warfare forever. In the United States and abroad, iron and steam would soon replace wood and sail for warship construction. Less than nine months later, the now-famous Monitor was under tow, heading south to Beaufort, North Carolina, when she sank in heavy seas, with substantial loss of life.

Monitor was a total and irretrievable loss; even the location of her final resting place became a mystery. Not until 1973 was the inverted hull located, and in 1974, excavation of the wreck began, under the auspices of the National Oceanic and Atmospheric Administration in partnership with the US Navy.

"For enthusiasts of marine archeology, naval history, and the Civil War, the book is a must-have." (Naval History)

“A vivid and comprehensive account of the USS Monitor project.” (International Journal of Nautical Archaeology)

“For students of Civil War naval history, John Broadwater’s work on the loss and recovery of the USS Monitor is a must read.” (Blue & Gray Magazine)

What listeners say about USS Monitor: A Historic Ship Completes Its Final Voyage