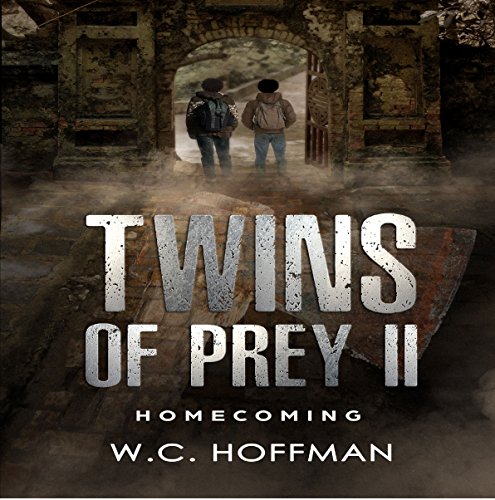 For twin brothers Tomek and Drake, life and death struggles were the norm when they lived off the grid, deep in the forests of Northern Michigan. Trying to adjust to their new way of life in the small town of Pine Run, it becomes increasingly apparent that even sleepy towns can have nightmares.

Controlled by a corrupt mayor and sinful priest, Pine Run has been overtaken by the darkest parts of society. With a thriving narcotics ring and a murderous gang called the Angels, these town leaders have the final say on who lives and who dies. The community now faces a terror like none they have known before.

Nothing is simple in Pine Run as the twins learn who has become the newly appointed Sheriff. Brothers Tomek and Drake must either challenge the corruption while relying on their life-long survival training or silently retreat to the comfort of the wilderness that surrounds them. Their choice is the difference between living and surviving.

This is book 2 and it continues at the place where book 1 ended. The twins are out to save their sister and learn their uncle was also a twin. I am liking this series

The Twins are back!!

Good second book, that picks up straight after the events of book one. The twins are rescued from the water grave, there sister left them in and discover 'Uncle' was also a twin!. Now the sheriff, Henderson is placed in danger, not only by the return of her brothers but also the locals running the town.

Good second book, moves along at a nice pace with a not seen twist at the end and a cliff hanger that needs you wanting book three.

Molek and Drake have to move to a small town after their home in the forest was destroyed.

The twins are having trouble adjusting to life in a town. Uncle's twin brother runs a general store there and they live with him. Their older sister is the new sheriff in town. The town is run by a corrupt mayor and a fanatical priest. The priest brainwashed the boys in his care. Several of his boys are enforcers and are called the Angels. The mayor and priest run the drug traffic and the Angels enforce it. The twins and Uncle's brother run afoul of the mayor and priest. The Angels burn down the convenience store which includes the twins housing. Lots oh action, death and an incredibly evil act by the priest changes everything.

He did it again!

2nd installment of a great series's! The author keeps you on the edge of your seat throughout the book and throws plot twists at you that you will never see coming!

Picked up where one left off

What made the experience of listening to Twins of Prey II: Homecoming the most enjoyable?

Continued the relationship built with characters from the first book, but brought more emotion as the set moved out of the bush.

Yes. I settled for 3 though.

Powerful Sequel! Not all Homecomings are Welcome!!

What I liked best was the internal conflict felt by the twins and their sister. They don't know if they are all on the same side fighting together or not. She does not trust them. The tension it builds adds to the story and helps make the characters really three dimensional. They are told to watch over her. What I liked least was that the story was over too soon. I really enjoy losing myself in this world and cannot wait to hear the next installment. There was only one part of the story I really liked the least though truly and that was the hidden message in Uncles letter to the Twins about his who his Twin was and that they should leave the woods and go with his Twin. The fact Drake would act on the message so suddenly was bothersome and made no sense to me other that the true loyalty to Uncle and his teachings.

The most interesting aspect of this story was that Uncle had a Twin of his own. I really found that interesting and it did help to explain why a bitter vet would soften and take in the twins. The was really a great way to expand the world of the story. The least interesting was the part of the story dealing with the drug running. The motivations for that are just barely mentioned only by Father Nico as doing Gods work but was he a delusional man or Greedy? That made him really uninteresting and just another jerk manipulating boys under the guise of a priest.

What does Daniel Rose bring to the story that you wouldn’t experience if you just read the book?

Mr Rose brings a great vocal talent that is vibrant and crisp. He is a true pleasure to listen to.

Was Twins of Prey II: Homecoming worth the listening time?

Twins of Prey II: Homecoming was well worth the listening time. It is an excellent sequel with a great story line that expand the world that the author has created. I find that this is a greatly enjoyable story that I personally plan on listening to more than once and have recommended to a few friends that are fans of this genre.

"This review copy audiobook was provided by the author free of charge via Audiobook Boom."

As we continue to follow the turbulent lives of the twin wild boys, they make several disturbing discoveries about previously unknown relatives... maybe. Violent death and mayhem reign supreme for this horribly dysfunctional little family, and we start to see more connections between the people of the town. The boys don't know friend from foe, as the tables keep turning, and their loyalties are tested again and again. This is a fabulously dark coming of age tale and I can't wait to see what happens next! And, oh yeah... Don't drink the kool-aid. ***I was given a copy of this audiobook in exchange for an honest and unbiased review***

great second book! can't wait for the third! The performance was good and the story was what I have come to expect from this author. I cannot wait for the next book to see what happens to the twins!

this book is very action packed and violent, it's a great book. it's well written and enjoyable. although I am a little confused about why these twins do what they do. but then it is hard to understand the actions of crazy people. the narration was excellent. would recommend it to others.