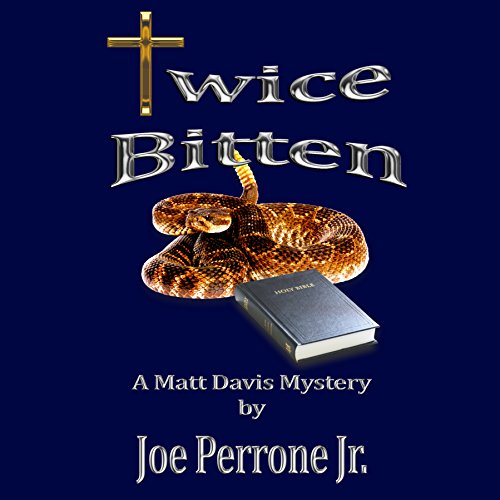 While in prison, Ron Trentweiler, a petty thief, is befriended by an itinerant preacher and gets "religion." Upon his release, he founds a small, storefront Pentecostal-style church in his native, rural Alabama. Enter Winona Stepp, a visitor at one of his services who seems to know all about "Brother Ron," as he has taken to calling himself, yet insists upon keeping her own past to herself. Things go smoothly for the pair, that is until Winona suggests using venomous snakes in their "act" and all hell breaks loose. Eventually, they make their way north into Matt's "backyard" in the Catskills, where things take a murderous twist. What secrets are hiding in Winona's closet? Is Brother Ron exactly what he appears to be? Is he a religious convert or just a con man? These and other questions confront Chief of Police, Matt Davis, along with the usual cast of characters in the new Matt Davis Mystery, Twice Bitten, as he once more comes face to face with murder in the sleepy village of Roscoe, NY.

What listeners say about Twice Bitten

A good detective mystery involving Matt Davis. It is interesting enough that I listened to the audiobook in its entirety. The narrator made it very interesting.

What did you love best about Twice Bitten?

I liked the whole storyline !

Some of it was set in towns near me,which was quite fun.

I really liked this book.The main plot was great,as was the storyline of the main characters family.The fact that some of it was set in towns I grew up near was icing on the cake!The narrator was wonderful.His voice was perfect for this reading.The only thing that would have been better was if the audiobook did not contain the sound of rain,if it was raining and other things like that.I found that a bit distracting.

Glad I found this one!

Would you consider the audio edition of Twice Bitten to be better than the print version?

I have been listening to audio books since 2001. I found the narration of this book brought the characters to life.

What other book might you compare Twice Bitten to and why?

A big city police officer moves on to led a small town's police force, that reminded me of Robert Parker's, Jesse Stone.

I get caught up in listening to the same well-known authors and don't usually experiment with my listening choices. This time I did and I'm glad I did. The story was entertaining and the narrator added to the experience. I highly recommend this book!

Great descriptions and an interesting story!

What did you love best about Twice Bitten?

These vivid descriptions and the narrator are incredible. The storyline takes us on a rush toward hell and back.

Each character added their own unique observation to the story. (Matt Davis)
It is interesting how the snake keeps cropping up throughout this story. :)

I would listen to more stories by Joe Perrone Jr.