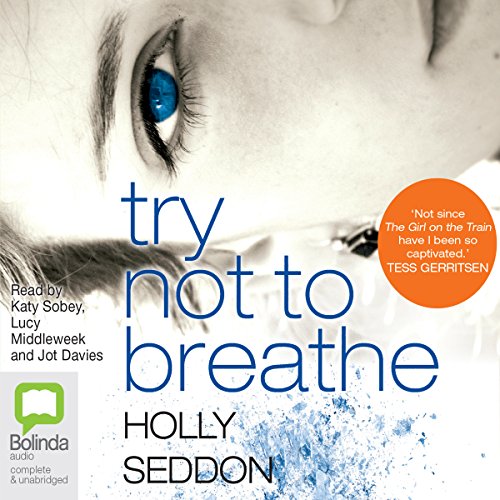 Try Not to Breathe

Some secrets never die. They're just locked away.

Alex Dale is lost. Destructive habits have cost her a marriage and a journalism career. All she has left is her routine: a morning run until her body aches, then a few hours of forgettable work before the past grabs hold and drags her down. Every day is treading water, every night is drowning. Until Alex discovers Amy Stevenson. Amy Stevenson, who was just another girl from a nearby town until the day she was found after a merciless assault. Amy Stevenson, who has been in a coma for fifteen years, forgotten by the world. Who, unbeknownst to her doctors, remains locked inside her body, conscious but paralysed, reliving the past.

Soon Alex's routine includes visiting hours at the hospital, then interviews with the original suspects in the attack. But what starts as a reporter's story becomes a personal obsession. How do you solve a crime when the only witness lived, but cannot tell the tale? Unable to tear herself away from uncovering the unspeakable truth, Alex realises she's not just chasing a story she's seeking salvation.

Shifting from present to past and back again, Try Not to Breathe unfolds layer by layer until its heart-stopping conclusion. The result is an utterly immersive, unforgettable debut.

What listeners say about Try Not to Breathe

Wonderful storytelling! This novel really captures my attention and I listened to it rather quickly because I was anticipating a shocking revelation in the end. However, the actual conclusion and solving of the case was somewhat boring and easily anticipated. It was still a very well written, suspenseful book, though!

If you can get over annoying irritating inflections in speech of two readers it's worth listening to.

I almost gave up after a couple of hours simply because of the male narrator's irritatingly inflection in his voice. When he was 'into ' his character this was less obvious , he's actually a good reader with lots of colour and expression , but I won't buy another audible book with him reading. When I first heard the female journalist's voice I thought 'oh no! Same inflection " I figured whoever picked the two readers must like this kind of voice. The voice of the 'girl' was excellent . To me if the voices aren't to my liking I find it hard to enjoy. The story was okay, easy listening , worth reading even with it's fairly abrupt ending . Nothing special but glad I got to end. It's not in the same ball park of Gillian Flynn or Paula Hawkins but perfect to entertain when doing something mundane - long drive , ironing etc...

Be patient gets better

Starts off slow but then becomes good and you don't want to put down. Good narration and you get a feeling of the characters

What a great book. Unusual and interesting storylines all tied together. Good narration. I had changing allegiance for the characters as the story developed. I really enjoyed this book. Couldn't wait to listen to the next bit. Thought provoking and, a crime, a mystery, a drama and a love story of sorts. Only thing which didn't ring true was the way in which people had access to the hospital ward, notes and the patients but a great listen

A superb book that pulled me in from the moment I started listening.

The story was made more interesting by having different character viewpoints read by several actors, making the narrative easy to understand and follow and drew you in further, making the characters more believable and likeable.

A who done it that doesn't spill its beans until right near the end. I had my suspicions with only 5 chapters to go but I still had 2 suspects and it could have gone either way.

A really good, solid ending for all characters involved.

Would highly recommend this book.

I honestly have no idea how this book has so many great reviews. The story was uninteresting, had a predictable ending was and without any real climax to keep the readers hooked. Don't waste 9+ hours listening to this

Excellent could not leave it out of my ear

Felt I knew who the person was that committed the crime but had to keep changing my mind which is a good trait of the book, so was taken back when it wasn't who I thought it was .. good story overall,

The culprit was easy to guess and I found it a bit boring, had I been reading instead of listening I would have skipped pages. One of those books I listened to because I'd purchased it - mediocre.

Story was predictable, so much so that you know the ending by half way through the book, with nothing exciting happening along the way. The audio was distracting as the voices seemed sing-song and irritating. Disappointing.

exactly what I was looking for!!

perfect cure for my The Girl on the Train withdrawal syptoms. This book has a similar layout in terms of the narrators and a gripping story line.

First I have to admit to very much disliking the voices used ! The intonation sounded off to me and became increasingly irritating.

As for the story, it did keep my interest but characters felt very received. The main character, who narrates most of it, was very similar to the one in The Girl on the Train. Another young woman whose life has been ruined by alcohol, starts to investigate a mystery and at the same time comes to terms with her alcoholism and the man she has lost as a result of it. This is almost identical.

So too is the structure of having several narrators, at least one of which is unreliable.

Lastly, the mystery, in other words who did it as it were,, I felt was not satisfying. I don't wish to spoil the ending so cannot really comment any more.

Overall, I was rather disappointed in a book that was not very well written and the plot of which seems to have been lifted from elsewhere. Unless I have got it the wrong way round and the girl on the train came first

Really enjoyed this engaging mystery with its complex and flawed main protagonist, which kept me guessing until the end - and when I thought I had worked it all out, I was wrong! I found the theme of a young victim in a coma who cannot disclose her perpetrator chilling, and really enjoyed the way Alex solves the mystery step by step, pulling the reader along in her wake. A wonderful debut novel, I look forward to reading a lot more from this author in future.
Loved the audible narration, which featured 3 different narrators for the 3 main characters in the book - a solid performance which kept me entertained throughout.

This is a really good book

You won't be sorry you bought this one.
Great story line.
Fabulous narration.
Well worth purchasing.

gripping right from the start

The narrators did an amazing job worth this book. Wthin moments I was totally immersed in the story. Loved it and didn't want it to end.

I really enjoyed three different people reading the different characters. The different perspectives and present and past events within the story held my interest.

Could not stop listening.

An awesome narration of an awesome story. Bravo Holly Seddon. Can't wait to discover more of your work.

This book is disturbing, compassionate and heartbreaking. Every angle draws you into another level and like Amy you feel totally captured, unable to break free of the story. Totally riveting read.

A good mystery and drama, tied up in love stories. Good listening for women and journalists.

Loved this book! Really couldn't stop listening and even when I did I couldn't stop thinking about it, especially towards the end.

I'm picky and I loved it!
Kept me interested even in short commutes to work.