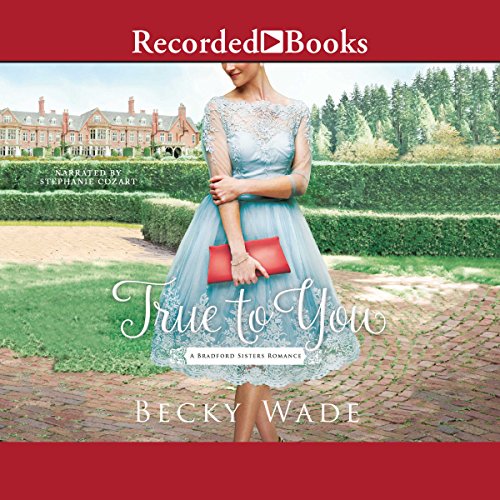 By: Becky Wade
Narrated by: Stephanie Cozart
Try for $0.00

Exciting start of a brand-new series by a contemporary romance fan favorite.

After a devastating heartbreak three years ago, genealogist and historical village owner Nora Bradford has decided that burying her nose in her work and her books is far safer than romance in the here and now.

Unlike Nora, former Navy SEAL and Medal of Honor recipient John Lawson is a modern-day man, usually 100% focused on the present. But when he's diagnosed with an inherited condition, he's forced to dig into the secrets of his past and his adoption as an infant, enlisting Nora to help him uncover the identity of his birth mother.

The more time they spend together, the more this pair of opposites suspects they just might be a perfect match. However, John's already dating someone and Nora's not sure she's ready to trade her crushes on fictional heroes for the risks of a real relationship. Finding the answers they're seeking will test the limits of their identity, their faith, and their devotion to one another.

What listeners say about True to You

While I love all of Becky Wades books, at first I wasn’t sure of “True to You”. I thought the main person, Nora , was a real ditzy person. I’m so glad that I read on to find the depth of her character. It is normal for God to allow obstacles to happen in our lives. They make us seek him and make us stronger in doing so.
John Lawson enters the story, and the story lines draw you into the humor, romance, and family dynamics of three sisters and the individual Faith and their personalities..
You know how when a coincidence happens and you say “It’s a small world”? When God’s plan unfolds his big picture is truly a small world.

I sure hope this will be anew series!

The dialogue was cute and snappy at times. The relationship was believable. It is a little sensual for a Christian book, so over 17 reader recommended

This story of Nora Bradford and John Lawson was delightful and just what you’d want from a lighthearted romance. It has interesting characters and the main two have depth. The story has some nice elements that are different than a lot of other chick lit stories. However, the narrator’s performance was very stilted and at times downright difficult to endure. It’s as if enunciation of every letter of every syllable was the most important factor. I prefer narrators that speak like humans do rather than feel as if I’m listening to elocution lessons. I’m afraid for that reason I’d hesitate to recommend the audio version.

Loved Listening to this Book!

I love this book and just finished it for the second time, this time I listened to it on Audible. I had forgotten exactly how much I loved this story. The narration was good. I liked how the narrator voiced most of the characters, with the exception of Corbin (a side character in this story who becomes a major character in book two).

This is my favorite of Becky Wade’s books. I’ve listened to this one numerous times and never grow tired of it. The narrator does such a great job of bringing Nora to life that it’s like listening to one of my dear friends. The story is powerful. Becky Wade’s romances always have impactful lessons tucked within, but she perfectly balances the deeper parts of the story with humor and grace (and of course, romance).

What a great book! I listen to books on my commute to work, and it made me not want to go inside. Very enjoyable, excellent message. LOVED it.

This book was recommended to me, and oh my goodness, I loved it. ❤️ I loved the characters. It made me laugh. And I was surprised at the depth of meaning and purpose in the plot. I will read more by this author.

I absolutely loved it! I binge listened to it all day. The characters, plot twists, and writing were all superb, as well as the faith elements. Truly remarkable.

Great storyline and characters, but at the end, it leaves so much hanging...needs a prologue.

I loved the narrator. did a great job with many different voices.
the story was very well developed. you got enough of details for the characters to stoke your curiosity and left you wanting more. there was enough suspense that kept you listening all at once.

I enjoyed listening to this contemporary Christian romance. I loved the characters and their spiritual journey just as much as their romance. The ending brought a year to my eye.