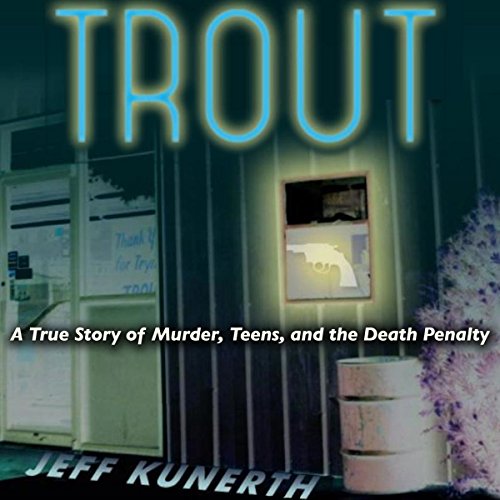 On a cool Pensacola night in January 1991, just a few minutes before midnight, three teenagers pulled up to the Trout Auto Parts store. Patrick Bonifay, his body coursing with adrenaline, entered the store clad in a ski mask carrying a loaded gun, intent on carrying out a poorly laid plan. Little did he know that it was his life - as well as the lives of his companions - that was about to be forever changed.

Bonifay, Clifford Barth, and Eddie Fordham were hired to kill Daniel Wells by Robin Archer, who blamed Wells for losing his job nine months prior. The plan was orchestrated by the then-27-year-old Archer, who allegedly promised his 17-year-old nephew, Patrick, a suitcase full of money after the job was done. But Wells had called in sick that night, and an innocent man was covering his shift.

In this shocking and thought-provoking volume, Jeff Kunerth recounts the events of that fateful night, the swift investigation of the murder, the trials and sentencing of the teens, and their subsequent lives within the Florida court and penal systems. Kunerth uses the story of the Trout Auto Parts murder and the lives of these boys to explore varying aspects of troubled adolescence, impulsive actions lasting but moments, and the national trend of trying juveniles as adults in court.

They were boys every teenager can identify with and circumstances every parent fears. Their story provides a disturbing, sad, and compelling inside look at the dynamics of individuals - not yet adults, but no longer children - who commit senseless, impulsive crimes.

Trout is that rare book that continues to haunt you long after you've finished reading it.

What listeners say about Trout

What did you love best about Trout?

Despite formula true crime books, "Trout" has a tremendously complicated story to tell, yet in in a highly intelligent narrative of extremely complex people, judicial and Supreme Court decisions, neurological studies, and a religious conversion in which the reader heartily hopes for but proves to be a bandaid on a gaping wound that will never heal. The true kicker comes in the last 5 minutes of this book. It is a conclusion, a theory is proposed by one of the convicted, in 1991, which makes perfect, logical sense and brings "Trout" to a throughly satisfying conclusion.

What other book might you compare Trout to and why?

Being a loyal Ann Rule fan, I would compare "Trout" to "The Stranger Beside Me" in the unabridged Part 3 book wherein Ms. Rule must come to terms and to honesty with herself in an Epiphany of who she thought she was, who she hoped Ted Bundy was, in reality, all just a small pile of ashes relative to a mountain of many beautiful, young women destroyed by a total narcissist.

Which character – as performed by Bob Malos – was your favorite?

Bob Malos portrayal of Peter is convincing at every turn -- a confused, conflicted teen embarking on murder; an introspective young man; approaching middle age in what appears to be a sincere religious conversion, then back again to a totally messed-up teenager mind-set and his ridiculous plans of fame, fortune and a reality TV program that is just madness.

"Ah ha!" "Eureka!" When the last puzzle piece fits into place, it is the same total satisfaction that your fingers feel as that last piece snaps flat on the table. It is contained in the last 5 minutes of the book. Revealing it here would make no sense having not heard all of the book. I actually smiled.

If you are an ardent reader of personal crime stories like me, GET THIS BOOK! The literary construction is flawless, and the mind-blowing conclusion is perfect.

Would you listen to Trout again? Why?

I will listen to Trout again. The story still sits with me days later. Its like I hope somehow the story would end differently... it however, like most non fiction doesn't. The book is so well written. 5 stars!!

You feel like your there at Trout auto- in the building. I can't explain it.

Please read! Worth buying for sure.

Interesting But Not Great

If you could sum up Trout in three words, what would they be?

What was one of the most memorable moments of Trout?

The description of the crime

What aspect of Bob Malos’s performance would you have changed?

Mr Malo has the incredibly annoying habit of emphasizing every third word. He also over articulates words so that his cadence is often staccato. This didn't happen all the time but it was very noticeable when he did.

It wasn't interesting enough to listen to all in one sitting. Plus I usually only listen to books when driving.

Where does Trout rank among all the audiobooks you’ve listened to so far?

Kunerth does a masterful job of weaving together the individual stories of each of the characters with the facts connected with juvenile justice and the death sentence. It was both informative and interesting. I appreciated the research that went into Trout as well as the writing style. It left me with a broader perspective of a difficult subject.

The characters were written about with compassion rather than judgement. No one person was portrayed as a one-dimensional monster.

Have you listened to any of Bob Malos’s other performances before? How does this one compare?

Malos narration is easy to listen to and engaging. I appreciate that he is able to add some characterization without making the performance into audio theater. He has a nice blend of energy that keeps me involved in the book and a calm that makes the listening experience smooth and enjoyable. His presentation of narrative as well as facts are both clear and clean. I enjoyed his performance of Trout.

It was fascinating to learn about the tensions held in a developing teenage brain. The book did a good job explaining physiological reasons for many teenage actions and traits.

A Winner In This Genre

No one can say that taking a life makes sense but in this case I was left scratching my head. I cannot imagine how many people this dreadful crime impacted as we are talking about a small community here. I can however tell you that Kunnerth did a superb job in that he did not leave even one 'stone unturned'. I could not get my mind around why these boys committed this murder in the first place. They seemed like pretty normal kids.

As far as the Judicial system was concerned, yes it appeared harsh but these guys took a life. I have no idea what the defendants were expecting...two weeks in Club Med?

If you are looking for a well narrated, brilliantly written and researched book without frills that will make you 'think' then you will NOT be disappointed.

What made the experience of listening to Trout the most enjoyable?

The author painted the characters with honesty, making the awful crime at the center of the book more shocking and real. A really interesting examination of youth crime and punishment follows and I enjoyed the analysis of what followed for the boys who committed the crime and what that really means for them and for us as a society.

Would you be willing to try another one of Bob Malos’s performances?

The performance was distracting because of over enunciation. Unfortunately, the narration repeatedly took me out of the story. I'm sorry to say that I found it quite grating.